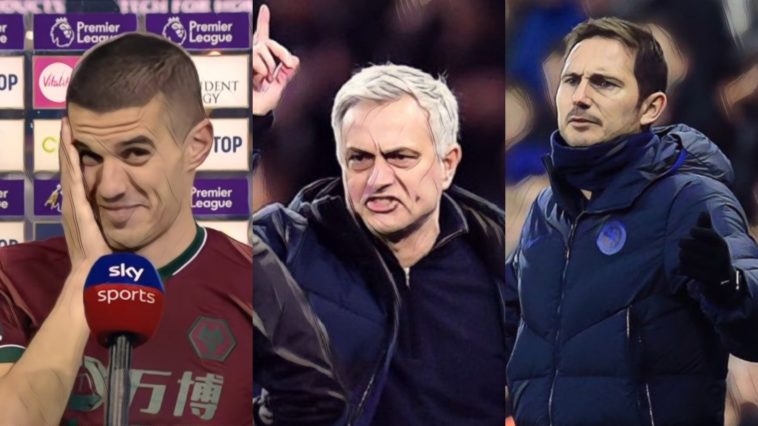 The weirdest and most unprecedented Premier League season brought with it many incredible moments on, off and just to the side of the pitch.

Here are some of the best non-football moments that captivated our screens over the past twelve months.

Jose Mourinho has gotten on everybody’s nerves at one point or another, but he can also be highly entertaining, whether he means to be or not.

The Portuguese tactician got one over his old foe Pep Guardiola when his Tottenham Hotspur side defeated Manchester City 2-0 at home. So he was in a good mood was Jose. Laughing, joking, smiling – just loving life really.

Then his assistant informed him Raheem Sterling was on a yellow card and in danger of being sent off following a bad challenge. One second he’s jovially laughing away, the next he’s sprinting like Batman on the way to the Joker’s lair to complain vociferously to the fourth official just a few short yards away.

So much to love about the entire scene, particularly the deliberate manner in which he closes his bottle and the official slowly backing away almost immediately like a sober man trying to avoid a pub fight.

Newcastle United’s victory over Chelsea at the beginning of the year was a brilliant moment for the Toon Army, but the real moment to savour happened in the stands.

In the pandemonium of the celebratory aftermath, Matt Ritchie smashed the corner flag and the remnants flew into the crowd like shrapnel, connecting with one unfortunate man to give us ‘Newcastle Fan Gets Hit In The Groin’. It was reminiscent of Hans Moleman’s famous scene in The Simpsons.

nahh so fucking haydens just scored last minute and matt ritchies just blares the corner flag into the crowd and its only gone and hit this bald bloke in the cock 😭 in fucking tears man #nufc pic.twitter.com/3YyicO4YEn

Of course, the club saw this was gaining traction online and wanted a piece of those sweet, sweet retweets. It’s somehow even funnier from this angle.

Apologies from Matt Ritchie… and the corner flag 😅😬#NUFC pic.twitter.com/Wz86Vpl1m4

It was almost topped by Ritchie calling an assistant referee a “wee dick” in another match later in the season.

The enforced break on sport due to the coronavirus resulted in an unexpected rise in social activism among athletes, reflecting what was happening concurrently in society all over the world.

The Premier League has not been immune to that development, with footballers such as Raheem Sterling and Marcus Rashford putting their head above the parapet to voice their opinions on important issues such as racism and child food poverty.

With the Black Lives Matter movement gaining support following the killing of George Floyd by police in Minneapolis earlier this year, the players chose to take a knee before kick-off of every game when football returned in June to show solidarity.

English Premier League returned to complete its season after 100 day pause. In the seconds up to kick off, every player on both teams Took a Knee to commemorate the murder of George Floyd. A remarkable sight that underlines and amplifies the global resonance of #BlackLivesMatter pic.twitter.com/qLJ8RUq94p

The gesture hasn’t been welcomed by everyone and the Premier League distanced itself from BLM before the start of this season, but it was a momentous thing for the players to do of their own volition.

Racism isn’t just a Millwall problem, it goes far deeper than that

Sheffield United and the goal that never was

Okay, yes this is a football moment, but it revolves around goal line technology so we’re counting this as an external force.

The first Premier League match back after lockdown was weird enough without any fans present in the stadium, but Sheffield United‘s trip to Villa Park featured one of the weirdest football events in recent memory.

Since being brought in several years ago, goal-line technology has worked seamlessly, removing any doubt over whether or not the ball has crossed the line. Unfortunately for the Blades, they became the first side on the receiving end of a mistake from the Goal Decision System.

As seen below, the ball clearly crosses the line following Aston Villa goalkeeper Orjan Nyland’s stumble after catching an Ollie Norwood cross, carrying it into his own net. Apparently, the Hawk-Eye cameras were “significantly occluded” by the ‘keeper and surrounding defenders. I’m sure Chris Wilder was consoled by that explanation after it cost his team victory.

It had a very real effect on the table too, as Villa finished one point outside the drop zone, just ahead of Bournemouth. The Birmingham outfit would not have stayed up had the goal been called, but then again they were also controversially denied a goal against Crystal Palace which would have earned them a point.

The two clubs have been on opposite trajectories ever since, with Villa flying high while the Blades remain rooted to the bottom of the table.

Picking our Premier League Team of the Year for 2020

Football without supporters is pants, but minus the accompanying crowd noise at matches we have been able to hear a couple of revealing things on the field and the touchline, which is what happened when Liverpool hosted Chelsea back in July.

The sideline cameras caught Frank Lampard in a confrontation with Jürgen Klopp which will surely go down as one of the all-time great manager meltdowns. That didn’t provide a whole lot of context, but thankfully someone in the stadium filmed the incident from the stand:

Lampard is obviously not happy with the free-kick that was just given (and subsequently scored by Alexander-Arnold), and is unhappy with Pep Lijnders for not sitting down. Klopp informs his counterpart that his assistant is in fact sitting down.

Lampard says to Lijnders “it’s not a f*cking foul, I’m not asking you”, before telling Klopp “you can f*ck off as well.” The highlight comes when the Blues boss says “you have your party later on, giving it the f*cking big ‘un, f*ck off.”

Frank Lampard was involved in a heated row with the Liverpool bench on Wednesday – and then saw Trent Alexander-Arnold smash one in to the top corner 🚀pic.twitter.com/HPjBLLKWbH

Afterwards, the Blues boss tried to explain the confrontation by referring to the behaviour of the Liverpool bench, warning them not to “get too arrogant with” winning the league. Just an altogether incredible moment that we would never have otherwise seen so intimately.

By the end of the year Klopp got into a number of verbal sparring sessions, notably Chris Wilder, BT Sport’s Des Kelly, and Roy Keane. It was the latter with whom the German traded words live on Sky Sports following Liverpool’s 3-1 win over Arsenal, taking exception with the Irishman’s analysis of the match.

🗣️ "Did Mr Keane say it was a sloppy performance? Maybe he is speaking about another game…" 👀