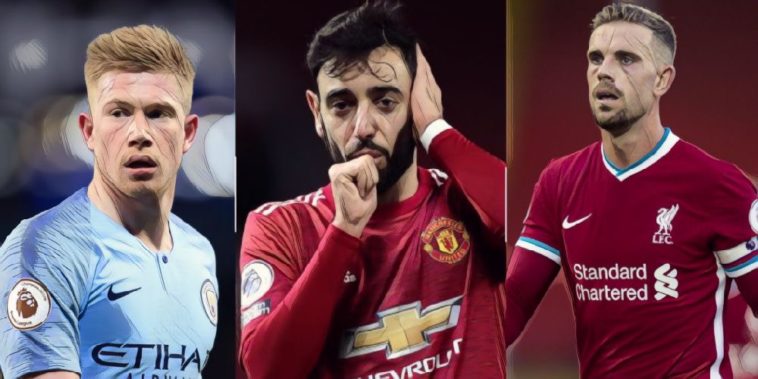 What has proven to be an unforgettable and unprecedented year of events is now rapidly approaching its end, with the new year upon us and hopes high for improved fortunes as we head into 2021.

In footballing terms it was a memorable year for Liverpool who were crowned as Premier League champions and ended a three decade wait for a top-flight league title, whilst Leeds made their return to the division after winning promotion from the Championship.

The end of the calendar year brings a whole host of annual awards and we’ve decided to compile our dream Premier League XI from 2020.

Here is the Football Faithful’s Premier League Team of the Year:

Arguably the best goalkeeper in the division and a player who remains irreplaceable to the champions, Alisson was once again a stand-out amongst the Premier League’s leading shot stoppers.

The Brazil international was a huge figure in Liverpool’s run to title success, helping the Reds to the division’s best defensive record for a second successive campaign and providing an assured presence as the last line of defence.

Alisson oozes calm and confidence and rarely appears to do anything spectacular, a trait which highlights his ability to make top-level goalkeeping appear so effortlessly easy.

Liverpool are the current league leaders and in pole position to retain their Premier League crown, their sole defeat this season coming in the absence of their outstanding number one.

Another member of a heavy Liverpool contingent in this side, Trent Alexander-Arnold was named as the PFA Young Player of the Year following his role in the Reds’ title triumph.

The 22-year-old has set new standards for attacking full-backs in recent seasons and eclipsed his own record for the most assists by a defender in a Premier League season during 2019/20, his ability to provide dangerous deliveries from both open play and set-pieces a vital part of the Liverpool attack.

Trent Alexander-Arnold is the first English player to make the FIFPro Men's World XI since Wayne Rooney in 2011 🏴󠁧󠁢󠁥󠁮󠁧󠁿 pic.twitter.com/52iFVgNHo3

The academy graduate possesses sublime technique and has enjoyed huge success since coming through the club’s ranks, Alexander-Arnold named in the FIFPro Men’s World XI this month and aiming to bring more silverware to his boyhood side in 2021.

Amongst the most competitive selections in our side, we’ve opted for Conor Coady as our first centre-back given his consistency in a Wolves team who remain amongst the best organised outfits in the division.

Coady is a vocal presence at the heart of the backline and a possesses a superb passing range, his performances having seen the 27-year-old break into the England side with the defender hoping to earn his inclusion ahead of next summer’s European Championships.

Summer signings Thiago Silva and Ruben Dias deserve mentions for their impacts at Chelsea and Manchester City respectively, whilst Jannick Vestergaard’s remarkable renaissance at Southampton this season means he is also unfortunate to miss out.

Virgil van Dijk is included as our second centre-back despite suffering a serious knee injury this season, the Dutch defender having been a cornerstone of the Liverpool side that won the title with a record seven games to spare last season.

The 29-year-old scored five league goals last season and has established himself as arguably the finest central defender in the game since moving to Merseyside, winning the Champions League and Premier League across his first two full seasons.

Van Dijk’s signing was undoubtedly amongst the leading catalysts for Liverpool’s transformation from pretenders into champions, a dominant aerial force whose ability to pick passes from deep is a trademark of the Reds’ attacking play.

The second half of Liverpool’s flying full-back duo, there is a strong case to be argued that Andy Robertson is the most complete left-back in world football.

Robertson is a relentless runner from deep and a hugely influential presence at either end of the pitch, with no player in the Premier League having provided more assists than the Scotland captain since the start of the 2018/19 season.

No player has provided more Premier League assists since the start of the 2018-19 season than Andy Robertson, level with Kevin De Bruyne on 28.

The 26-year-old is a huge fans’ favourite for the tenacity and intensity he brings to the Liverpool side, whilst his importance is evidenced by the statistics, no player in the league having provided more crosses or taken more touches so far this season.

Jordan Henderson’s recognition as the FWA Footballer of the Year for 2019/20 capped a remarkable rise for the midfielder, who has spent much of his career winning over doubters before establishing himself as arguably the key figure in the Premier League’s best side.

The England international is the undisputed leader of Jurgen Klopp’s winning machine and his presence is sorely missed when he is absent, both for his organisation and the energy and drive he brings to the Reds’ engine room.

The 30-year-old ensures standards rarely slip in a side which has reached incredible levels of consistency over the past two years, a box-to-box influence whose footballing ability should not be overlooked when assessing the Premier League’s best midfielders.

Regarded by many as the Premier League’s finest footballer, Kevin De Bruyne was coronated by his fellow professionals as the best in the division after winning the PFA Player of the Year last season, following a campaign in which he equalled the league’s single season assist record.

De Bruyne can appear on an entire different planet and wavelength to his teammates on occasion, a sensational passer of the ball and a player whose vision is almost unrivalled.

No player in the Premier League was directly involved in more goals during the 2019/20 season than the Belgium international, who scored 13 league goals alongside his 20 assists to stand head and shoulders above the rest of the division.

Despite questions over his form this season he has still provided nine goal involvements in 11 starts, De Bruyne an improbably complete footballer and the heartbeat of Pep Guardiola’s City side.

Featuring on the left of our midfield diamond system is Jack Grealish, a player no longer just Aston Villa‘s leading light but unquestionably amongst the finest creative talents in English football.

Despite featuring for a struggling side last season the midfielder was in brilliant form for his boyhood club, scoring eight goals and providing six assists as Villa secured safety by the narrowest of margins following promotion.

Kevin De Bruyne was the only player in the division who bettered Grealish for key passes and shot-creating actions, whilst the 25-year-old leads those metrics this time around after starting the season in sparkling form.

Grealish has broken into the England side and currently has 11 goal involvements from just 12 appearances in the Premier League this season, the division’s biggest clubs certain to be monitoring his progress at Villa Park.

Has a winter window signing ever had such an immediate impact?

Bruno Fernandes’ arrival at Manchester United proved the catalyst behind the club’s surge into the Champions League places last season, providing an instant spark for Ole Gunnar Solskjaer’s side and producing at a remarkable rate.

The Portugal international has been directly involved in more goals than any midfielder in Europe’s major leagues since his debut for the Red Devils, providing 17 goals and 12 assists in just 27 league appearances.

It is a frightening level of consistency from the star, who has arguably been the Premier League’s leading light since his introduction into English football almost a year ago. Already the leader of the Manchester United side, the club’s hopes for the new year are largely pinned on his shoulders.

Mohamed Salah has perhaps become a victim of his own success when it comes to individual acclaim, his elite levels of productivity having largely been overlooked for accolades since that record-breaking 2017/18 debut season at Liverpool.

Those 44 goals in all competitions set the benchmark for the Egyptian international, but he remains arguably the Premier League’s best attacking talent and has scored more goals in 2020 than any other player.

Salah finished as the Reds’ leading scorer as they secured the Premier League title last season and currently leads the race for the Golden Boot, the 28-year-old seeking to finish as the division’s leading scorer for the third time in just four seasons.

Alan Shearer and Thierry Henry are the only players to have won the award on more than two occasions and few would bet against Salah – who has scored 86 goals in 121 league appearances for the Reds – joining that illustrious company.

His brace in last weekend’s win over Crystal Palace also means he now possesses an average of 0.97 expected goals/assists per game, the highest figure in Premier League history.

Arguably the most difficult selection on the team sheet with a whole host of options considered, though we’ve selected Harry Kane over Tottenham teammate Son Heung-Min and Golden Boot winner Jamie Vardy.

Kane has scored 16 league goals in 24 appearances throughout the calendar year and whilst those statistics make for impressive reading, it is the forward’s evolution of his game that earns him inclusion in our Team of the Year.

The England captain has enjoyed a record-breaking start to the 2020/21 season in a new creative role, dropping deeper than ever before and showcasing his phenomenal passing range during the opening months of the campaign.

Kane has provided 19 goal involvements in just 14 appearances so far this season, his 10 assists the most in the Premier League and the most he as ever recorded in a season already.

The 27-year-old remains an elite goalscorer but his multi-faceted skills have moved him into the conversation of the world’s best forwards, a player seemingly capable of leading Spurs to silverware in 2021 after more than a decade wait.

Read – Required Reading: Five of the best football books of 2020