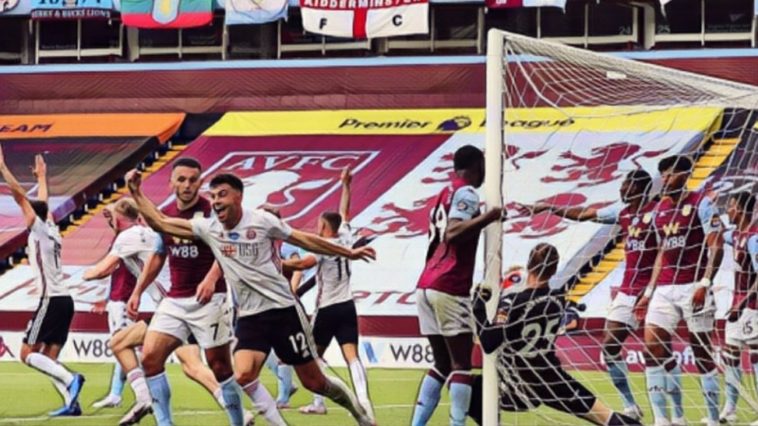 The Premier League finally returned on Wednesday evening but it didn’t take long for the first controversy to rear its ugly head.

In a game with few clear cut chances, Sheffield United seemingly took the lead after Ollie Norwood sent a free-kick towards the back post. Aston Villa goalkeeper Orjan Nyland caught the ball, but lost his balance while holding the ball, taking it over the line.

The visitors began celebrating what they felt was a clear goal, but referee Michael Oliver didn’t see it cross the line and the usually reliable goal line technology, for some inexplicable reason, didn’t inform him that it was a legitimate goal.

Should Sheffield United be ahead here!? 🤯

It looked as if #AVFC 'keeper Ørjan Nyland took the ball over his own line but goal-line technology says no goal! ❌ pic.twitter.com/kbSsJajwrF

Play went on and the half-time whistle was blown not long afterwards, but it left everyone watching bemused as to how a goal was not awarded to the Blades. Naturally Twitter was quick to react to the bizarre moment.

Even Stevie Wonder would've seen this ball was inside the net #AVLSHU https://t.co/z0PNLqKzbH

Sheffield United robbed of a goal. Even VAR has become kinder and more generous during lockdown

Bielsa would not only let Sheffield United score, he'd also speak to the whoever's running the VAR and tell them not to worry, mistakes happen, and it'll be ok

That’s tough on Sheffield United, the ball was about a foot over the line; but isn’t lovely to a stupid football controversy to talk about? Wash over me like a warm bath, pointless to-and fro about football!

ball has to go 2 metres past the line, keep up

Sky Sports trying to quickly record a crowd singing "Fuck Goal Line Technology" to play in the second half.

not the first time sheffield united have been denied a goal despite the ball clearly crossing the line … pic.twitter.com/1Gh8jjtajy

VAR could have overruled the GDS, but for some unknown reason did not take action.

🗣"I can't understand, I'm standing right by it"

Nothing like a pointless football controversy to take your mind off a pandemic.