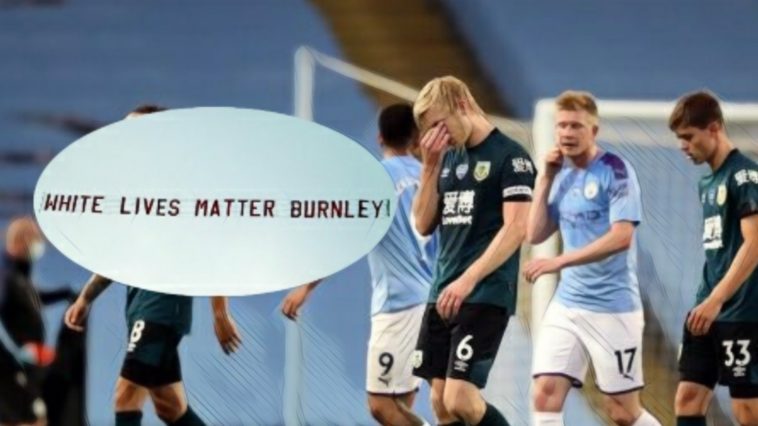 Following Burnley’s 5-0 trouncing at the hands of Manchester City, Ben Mee expressed his disappointment and disgust at a controversial banner that was flown over the Etihad Stadium during the match.

The Premier League has been acting in solidarity with the Black Lives Matter movement since returning to action last week, with players names on each jersey being replaced with ‘Black Lives Matter’ and a BLM patch on every shirt sleeve.

All players, match officials and staff also took a knee before kick-off in tribute to George Floyd, whose killing by police in Minnesota sparked worldwide protests.

While this has found widespread support among followers of the English game, it has not been universally popular, with some expressing their opposition to these demonstrations of solidarity.

That opposition manifested itself beyond angry tweets on Monday night, as a plane that flew over Man City‘s home ground during the game carried a banner which read: “White Lives Matter Burnley”

Ben Mee, speaking to Sky Sports after the final whistle, left zero doubt as to his feelings on the offensive stunt:

“I’m ashamed and embarrassed that a small number of our fans have decided to fly that around the stadium,” the Englishman said.

“There’s a group of lads in there that is embarrassed to see that, they’ve missed the point of the whole thing we are trying to achieve and these people need to come into the 21st century and educate themselves.

“It does not represent what the club is about, what the players are about and what the majority of the fans are about, that’s for sure. It’s a small minority of people and I’m really upset that happened.

“Literally as we were coming out, we heard some whispers that it might happen, the club were trying to stop it.

“I hope it doesn’t happen again. We are ashamed and upset.”

Dalian Atkinson tragically died in 2016. We paid tribute to the Aston Villa cult hero on our 90's Football Hall of Fame podcast. #avfc

Burnley quickly released a statement in which the club apologised “unreservedly” for the incident and expressed their vow to hand out lifetime bans to any persons found to be involved:

“Burnley Football Club strongly condemns the actions of those responsible for the aircraft and offensive banner that flew over The Etihad Stadium on Monday evening.

“We wish to make it clear that those responsible are not welcome at Turf Moor.”

Manager Sean Dyche called the flying of the banner “unacceptable”, while Pep Guardiola said “everyday we have to fight” against racism.