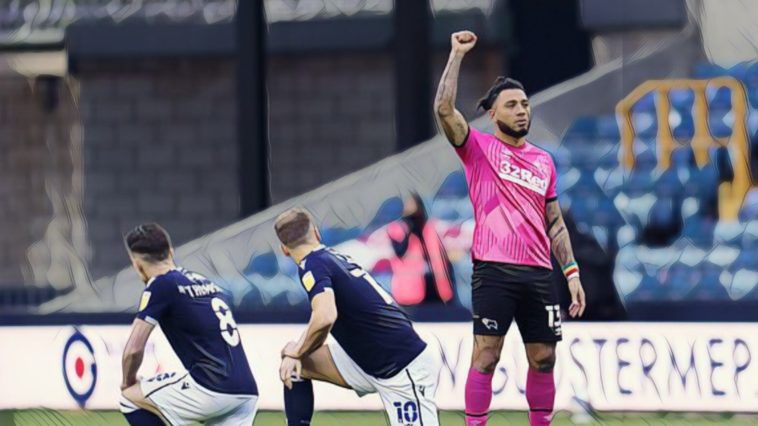 Have you heard the one about the Marxist organisation plotting to implement a new world order in the name of black power and anti capitalism?

It begins last Saturday in South London. As we all know by now, Millwall fans booed the players taking a knee prior to kickoff of the encounter between the Lions and Derby County.

It was the kind of moment that had been dreaded ever since English football collectively decided to protest against racism following the killing of George Floyd by police in the United States. We had yet to encounter such a situation as fans have been absent from grounds since the coronavirus forced the UK into lockdown earlier this year.

It was met with immediate condemnation from the football world. The FA and EFL expressed their disappointment at the action taken by a large section of the supporters present at The New Den, Derby’s interim manager Wayne Rooney called it “disgraceful and mindless”, while Sanjay Bhandari, chair of Kick It Out, praised the players for “defying the hate shown by some fans”.

The most compelling comments came from the players themselves. Millwall defender Mahlon Romeo expressed his hurt at his fans booing the players.

“Today’s game, to me now, has become irrelevant. The fans have been let back in, which the whole team was looking forward to,” he told the South London Press. “But in society, there is a problem — and that problem is racism. The fans who have been let in today have personally disrespected not just me but the football club, and what the football club and the community stand for.”

According to The Athletic, the right-back then “burst into the press room afterwards and had to be escorted back outside by club officials.” Rams striker Colin Kazim-Richards called the booing an “absolute disgrace”.

Millwall Football Club, meanwhile, took a full day to release a statement which, as New York Times reporter Tariq Panja pointed out, didn’t include the words “black”, “race” or “racism”. The Supporters’ Club said they “fervently believe the motives of those behind the booing were not racist.”

Indeed, there was some galaxy brain mental gymnastics at play to justify the booing for any reason other than racism. This is where Marxism comes into it, a term that trended on Twitter across the weekend.

This, after all, is the premise behind the fans who booed the players kneeling. To them, it was all about protesting Black Lives Matter, a supposedly Marxist organisation that wants to put an end to the nuclear family and destroy capitalism.

Anyone pretending that booing players taking the knee is about “protesting Marxism”, come off it. Football’s stakeholders have bent over backwards trying to keep these protests as corporate-friendly as possible. This has nothing to do with Marxism + everything to do with racism.

I was sent for some shifts in millwall fan pubs some years and I can say that nope it’s the racism pic.twitter.com/Ev7sFlxjdV

Which is funny, because I was under the impression that BLM was an anti-discrimination movement that began seven years ago in response to institutional racism in America and beyond. Silly me. But we shant dwell on this sad excuse for such shameful behaviour, because it is so transparently a diversion from the real matter at hand.

And that, dear reader, is not the spectre of a communist society, but the scourge of racism. While it is easy to look at what happened at Millwall, a fanbase with a long history and reputation for bigotry, and suggest this is an isolated incident limited to just one problematic club.

The reality is that racism is a deep rooted problem in English football culture. Despite all of the strides made since the dark days of the eighties, when skinheads and the National Front were a common sight on the terraces, it’s still there. These days it bubbles under the surface, simmering and waiting for its moment to come out.

That’s been steadily changing more recently, though, in the wrong direction. In September Kick It Out revealed there has been a 42% increase in incidences of racist and homophobic abuse over the past year. In that time it’s become disgracefully common for footballers to be on the receiving of abuse on social media following poor performances; Paul Pogba, Marcus Rashford, Kurt Zouma, Ryan Sessegnon, and it’s likely a lot more have gone unreported.

Thankfully the upper echelons of the English game are a far more welcoming place for women and children, and it’s probably fair to characterise the vast majority of football fans in grounds across the country as non-racist.

But that is no longer enough. It is incumbent upon all of us to be virulently anti-racist. If we don’t support black footballers and fans then we are tacitly permitting the bigots to take over. And then what for the beautiful game?

Read: Five bonkers statistical oddities the Premier League has served up this season