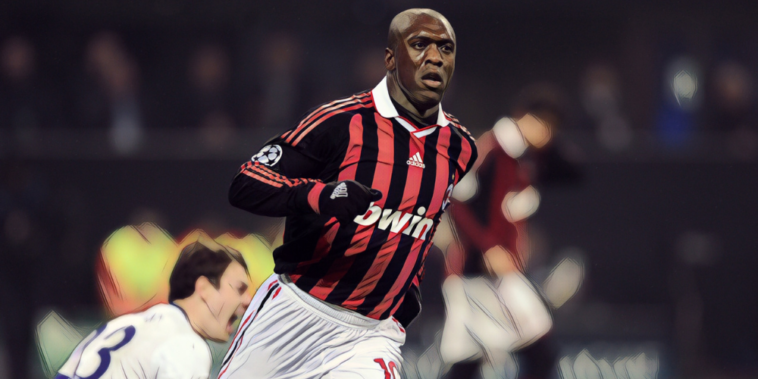 The very best midfielders in world football must have multiple strings to their bow, capable of influencing proceedings at both ends of the pitch and handling the responsibility of being the conductor of passages of play.

Clarence Seedorf was one such player seemingly capable of it all, handed any task in the engine room of a number of Europe’s leading clubs the former Netherlands international was more than capable of performing the job at hand.

In fact, he was excellent at it, and Seedorf is the latest player we profile in our Midfield Magicians series, a footballer who achieved unique feats during a career spent at some of the continent’s superpowers.

Seedorf’s footballing venture began in the Netherlands, having moved to north-western Europe as a child from Suriname.

Amongst the many diverse cultures within the Netherlands the Surinamese are a prominent demographic and Dutch footballers who share ancestry from the South American nation include Frank Rijkaard, Ruud Gullit, Edgar Davids and Patrick Kluivert.

Hailing from a footballing family, Seedorf took his first steps into the sport with local sides before his precocious talents were spotted by Ajax – courtesy of a scouting company founded by Johan Cruyff.

The capital club and their devotion to young talent proved the ideal match for the midfielder, who rose rapidly through the ranks to make history for the first time, becoming Ajax’s youngest ever debutant in 1992 aged just 16 years and 242 days.

Seedorf’s emergence coincided with the rise of an Ajax side who soon followed in the footsteps of the club’s legendary teams of two decades earlier, his second season seeing the Amsterdam outfit win a 24th league title.

The best, however, was yet to come.

The 1994/95 season proved the finest in Ajax’s long and storied history as a side with an average age of just 23 conquered all before them, winning both the Eredivisie title and Champions League without defeat.

An incredible collection of young talent had upset the established order to be crowned champions of Europe, with a teenage Seedorf proving pivotal to their historic success with 48 appearances across all competitions.

Hopes of a dynasty in Amsterdam were ended following the introduction of the Bosman ruling soon after Ajax’s continental triumph and Seedorf was part of a mass exodus of talent over the following seasons.

Departing a prominent role at the finest side in Europe aged just 19 seems a strange decision, but demonstrates the insatiable desire for success that Seedorf possessed.

He had achieved all that could be achieved in Ajax, but there were new challenges to face on the continent.

Seedorf signed for Sampdoria on a free transfer in 1995 and continued to enhance his reputation as one of Europe’s most promising midfielders, though spent just a single season with the Italians before another Bosman move as the bright lights of Real Madrid came calling.

It was in the famous all-white colours where Seedorf accelerated his star status, producing some of the best football of his career in Los Blancos’ engine room, combining dynamism with flawless technique and one of the most powerful shots in European football.

His first season saw Real crowned as champions of Spain, whilst his second brought a second Champions League winners’ medal as Juventus were beaten at his old hunting ground of the Amsterdam Arena.

That second campaign also brought a moment Seedorf is still revered for amongst the ever-demanding Madrid fanbase, a laser-like effort from just inside the Atletico Madrid half during an opening day draw with the club’s city rivals.

Despite his strong performances and ever-present status throughout his first three seasons in the Spanish capital, Real attempted to use the midfielder in a swap-deal for Juventus’ Zinedine Zidane in 1999, before his role began to diminish under compatriot Guus Hiddink.

Mid-way through his fourth campaign Seedorf returned to Italy and signed for Inter Milan, a league where his best traits shone through as the Dutchman’s vision and tactical intelligence thrived.

Regarded as the best division in world football at the turn of the century, it was a chance Seedorf later admitted was too good to turn down.

“I got the phone call from Marcello Lippi. I was in Rio de Janeiro (on holiday) at that point – he woke me up actually – I said, ‘Hello, who is this?’.”

“He said, ‘I want you to come to Inter and play behind Ronaldo and (Christian) Vieri.’

“I said, ‘Can you say that again? Give me just five minutes, I will pack my stuff, I am coming.’

Despite some fine moments at Inter – including this stunning brace in a draw with Juventus – his time with the Nerazzurri lasted just two-and-a-half seasons and 93 appearances before Seedorf was once again on the move.

Swap deals are a rarity in football, rarer still when they include two top talents and direct exchange between one of football’s most famous rivalries.

As Francesco Coco moved from AC Milan to Inter, Seedorf headed in the opposite direction and it was the Rossoneri who emerged as the victors of the stunning trade.

Seedorf signed for Milan as the club began a golden era of success under Carlo Ancelotti, who assembled one of the most iconic midfield line-ups since the turn of the millennium.

Seedorf’s drive and creative quality saw him dictate games from the left-side of a midfield quadrant, with the combative Gennaro Gattuso scuttling around the pitch on the opposite side and bringing bite.

Andrea Pirlo orchestrated magnificently from the deepest role at the base of the midfield, whilst Rui Costa – and later Kaka – provided the ammunition for a forward pairing.

Seedorf secured his unique piece of footballing history at the end of his maiden season with Milan, as Ancelotti’s side defeated Juventus on penalties to win the Champions League at Old Trafford.

It was the midfielder’s third winners’ medal, with each coming at different clubs, a feat no other man has achieved before or since.

Seedorf’s multi-functional abilities made him the perfect player to slot into Ancelotti’s fluid system, capable of covering in a deeper role or driving forward to join the attack and operate as a traditional trequartista.

Milan continued to go from strength to strength as a talented side achieved more success, claiming the Serie A title the following season before reaching two further Champions League finals over the following four campaigns.

The first ended in heartbreak following an inexplicable 2005 collapse against Liverpool in Istanbul, though redemption was found against the same opposition in Athens two seasons later.

Seedorf, as ever, was amongst the driving forces of the Rossoneri’s success, scoring in victories over Bayern Munich and Manchester United respectively during Milan’s run to the showpiece.

Another league title success followed in the 2010/11 campaign, the penultimate season in Seedorf’s decade-long association with Milan that brought 432 appearances – the highest of any non-Italian – 62 goals and 10 trophies.

As Milan’s fortunes fluctuated, Seedorf remained a constant, an iconic figure in their iconic sides of the early 2000s and a bona fide legend of both the club and European football.

His final swansong saw Seedorf head to South America, a player with an unrelenting will-to-win embarking on one final challenge in the colours of Brazil’s Botafogo.

It will come as little surprise that Seedorf’s last dance in Rio de Janeiro proved a huge success, as even into the twilight of his career he helped his side to silverware success – a born winner, even until the very end.

His body of work speaks for itself, as does his ability for those fortunate enough to witness Seedorf in his pomp. A visionary in possession with grace and guile, but with the robustness and resilience to go toe-to-toe with any engine room, there have been fewer more complete midfield players than Clarence Seedorf.