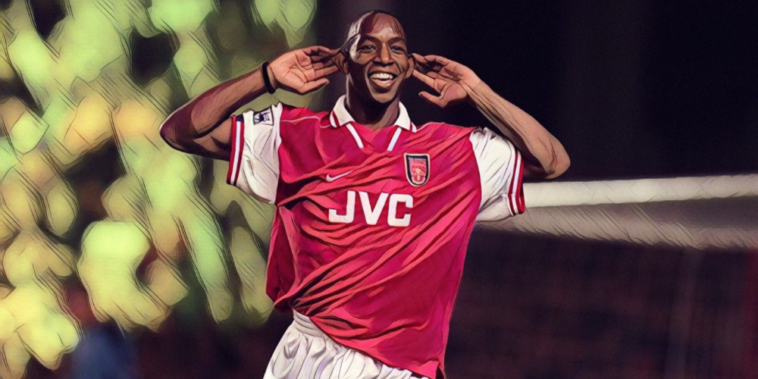 Ian Wright lived and breathed scoring goals, the sight of the Arsenal number eight wheeling away grinning ear to ear became a more than familiar one for an adoring Gunners support.

Wright’s time with the north Londoners saw him become a record breaker, his 185 goals across all competitions for Arsenal eclipsing the landmark set by Cliff Bastin, with only Thierry Henry having since bettered the remarkable tally.

His rise to a status as Arsenal’s greatest goalscorer was far from straightforward however, coming through the troubles of his youth to cement himself as one of the Premier League‘s finest forwards.

From instinctive close range finishes to audacious moments of execution around the area, Wright’s repertoire of goals was both diverse and delightful.

This is the story of one of the Premier League’s great Golazo Merchants.

Wright was born in Woolwich, south London, as the son of Jamaican immigrants, his upbringing one that posed challenges as a child desperate to find refuge from his home life found some solace in sport.

His story has often been retold as a rags-to-riches tale and whilst aspects of that sentiment are true, it proved an arduous road for Wright with the youngster admitting he spent much of his early life filled with anger.

Having played truant from school to play football with friends, he walked away from education and home at just 14, beginning a job as a labourer as his dream of becoming a professional faded fast.

Failed trials with Brighton and Southend resulted in Wright becoming disillusioned over his career prospects, whilst his turbulent personal life included a two-week spell in Chelmsford prison for motoring offences – a situation which had a transformative impact upon his psyche.

Upon his release Wright juggled the demands of being a young father with spells on the amateur and non-league circuit at clubs such as Ten-em-Bee and Greenwich Borough, his performances for the latter attracting interest from Crystal Palace.

Cautious given his previous disappointments, the forward was reluctant to trial but the 21-year-old impressed the Eagles enough to earn a professional contract in 1985.

It would be the start of a meteoric rise.

Wright scored nine league goals during a first full season spent largely as a substitute, before exploding over the following seasons in a prolific period in Palace colours.

He netted 118 goals across all competitions to become the club’s highest post-war goalscorer during his six-season spell at Selhurst Park, firing the Eagles to top-flight promotion during the 1988/89 campaign.

His exploits continued despite the step-up in division, including coming off the bench to score twice in the 1990 FA Cup final as Palace came agonisingly close to silverware – losing an eventual replay against Manchester United following a 3-3 draw at Wembley.

It came as little surprise that the forward’s form piqued the interest of rival sides and it was Arsenal who secured the signing of Woolwich-born star in a club-record deal.

Wright made an instant impression, a hat-trick on his league debut against Southampton a sign of things to come.

George Graham’s side had become renowned for their defensive resilience, but the record arrival of Wright added a new dimension to the side.

Wright’s tenacity and showmanship made him a firm fans’ favourite at Highbury, proving himself to be both a great goalscorer and scorer of great goals.

His debut season saw him score a hat-trick on the final day of the campaign to win the First Division Golden Boot and as the dawn of the Premier League began in the early nineties, the Arsenal number eight was one of the division’s premier players.

Often tasked with being the difference-maker in an era when the chant of ‘One-Nil to the Arsenal’ regularly rang round the terraces in north London, our look back at Wright’s greatest goals begins on his former stomping ground.

Arsenal travelled to Crystal Palace in the Premier League’s inaugural campaign on a four-game winning streak, a sequence that was extended courtesy of Wright’s late winner.

It was a goal that showcased the delicate link-up play and devastating finishing that came to define the star, combining effortlessly with Kevin Campbell before firing a crisp low finish into the far corner.

That goal was part of 30 scored in all competitions by the talismanic Gunners’ great, though his prolific return could not prevent Arsenal from slipping to a disappointing 10th-place finish.

Consolation was found in cup competition however, as the north Londoners became the first team in history to win a domestic cup double – Wright scoring in both meetings as Sheffield Wednesday were beaten in a replayed FA Cup final.

Wright’s reputation proceeded him as another prolific campaign resulted in European Cup Winners’ Cup success the following season, netting in all but one round on route to the final as further silverware was secured.

He netted 23 league goals – his joint-best haul in a Premier League campaign – including this early season effort as part of a brace against Everton at Highbury.

Wright had earlier put the north Londoners ahead, before David Seaman’s long kick was missed by both Kevin Campbell and Gary Ablett as the duo contested an aerial duel.

Latching onto the bouncing ball, Wright juggles the ball one way and then the other, before lifting a deliciously deft lob over the stranded Neville Southall to double Arsenal’s advantage,

It was a goal that encapsulated the best of Wright’s penalty-box prowess, a perfect storm of imagination, audacity and technique.

Later that season and Wright was back in the headlines with another lifted finish, after scoring this wondrous chip against divisional whipping boys Swindon.

John Gorman’s side conceded over a century of goals on their way to relegation, but perhaps none better than this exquisite goal as Wright sealed a 4-0 win for the Gunners at the County Ground.

Just how good is this Ian Wright chip? 🤯#GoalOfTheDay pic.twitter.com/5PhoMsPc7D

Even given his own frustrations under the new management Wright continued to fire, finishing as the Gunners’ leading goalscorer in six consecutive seasons.

This goal against Leeds during the 1996/97 campaign added to an ever-growing catalogue of classy chips, as Wright put the finishing touches on a 3-0 win at Elland Road.

In the infancy of an irresistible partnership with new arrival Dennis Bergkamp, the forward latches onto a pass from the Dutchman before twisting and turning on the edge of the area.

Head down but with an almost instinctive understanding of the goalkeeper’s positioning, Wright sails an outstanding finish up and over John Lukic to add another memorable moment to his vast collection.

Wright remained as the Rioch era made way for the relative unknown Arsene Wenger, a coach whose previous role had been in Japanese football with Nagoya Grampus Eight.

Wenger merged an old-guard including the likes of Wright and Tony Adams with a new influx of exciting foreign talent, which later formed the backbone of one of the Premier League’s most iconic sides.

Wright excelled in thrilling tandem with Bergkamp, whose record arrival provided the star with a new lease of life, the electric movement of the former the perfect compliment to the latter’s graceful guile.

Arsenal claimed a domestic double during Wenger’s first full season in charge as Wright finally landed a league winners’ medal, though his contribution was restricted in what proved his final campaign for the club.

Early in September however, came arguably Wright’s defining moment, with Bolton the visitors to north London.

Overcome with excitement after opening the scoring, the elated forward removed his shirt to reveal a vest emblazoned ‘179. Just Done It’ – Arsenal’s new record scorer.

Wright’s elaborate celebration had come prematurely however as his goal had seen him draw only level with the legendary Cliff Basten, though it mattered little as he completed a hat-trick to make history at Highbury.

His departure at the end of the season saw Arsenal wave goodbye to a bona fide club legend, with latter spells at West Ham, Nottingham Forest, Celtic and Burnley a mere farewell tour to an exceptional career.

Wright was capable of all manner of goals from 30-yard stunners to toe-pokes from close range, to him it mattered little – he cherished each and every one.