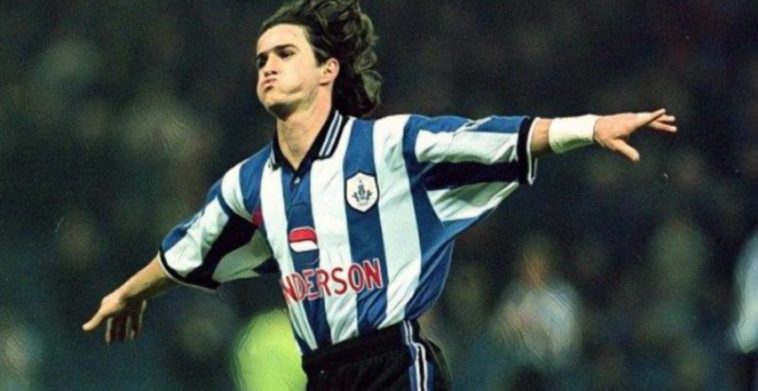 Typically elusive as they are, memories delight in playing tricks on us.

So it is that we recall Benito Carbone as being part of the first wave of foreign players to our shores as the Premier League’s new-found riches gave it a cosmopolitan sheen. He was a novelty in that regard. A player defined by a quixotic, exotic aura of other-ness.

And to an extent, that all holds true. Escaping from a hellish stint at Inter Milan that saw him stationed against his will on the left and with opportunities further reduced by the recent signings of Ciriaco Sforza and Youri Djorkaeff, the Calabria-born forward was in that first invasion of technically-gifted stars from abroad who twinkled in hairbands alongside team-mates called Dave and Andy who sweated for a living and viewed step-overs with suspicion.

Even so, an indisputable timeline tells us that when Sheffield Wednesday signed the forward for £3m in October 1996 there were already 239 non-English stars parading their talents in the top flight. Indeed his arrival meant exactly a third of the Owls squad was made up of overseas fare. Arsene Wenger was starting to implement a diet of pasta and abstinence at Highbury. Eric Cantona, Andrei Kanchelskis and Anders Limpar, to name but three, were already well established in the Premier League while Ruud Gullit was several months deep in introducing ‘sexy football’ to West London. In short, it should have been no big deal that ‘Beni’ Carbone was not from round these parts.

Yet it was a big deal and that remained the case throughout the Italian’s six-and-a-bit years in Blighty that never had him shed that outsider vibe. Think of Carbone then and think of him now and for all of the impish touches and marvelous moments he gave us what is the first detail that comes to mind? It’s that he was foreign. Alice banded, mercurial and foreign.

The reasons for this are manifold with some of them on the player for his failure to integrate and some on us, for our small town mentality.

Let’s begin with the most facetious reason but one that is pertinent nonetheless. When the 25-year-old agreed to make the surprising move to Yorkshire he was photographed on the Hillsborough turf next to David Pleat pretending to eat from a stodgy plate of spaghetti. Really. That actually happened. A year later, when his compatriot Paolo Di Canio also signed for Wednesday the pair of them were coerced into taking a fake bite from a semi-thawed pizza a snapper had bought on his way to the ground.

Remember when Sheffield Wednesday made Benito Carbone and Paolo Di Canio pose in front of the least appetising Italian cuisine ever? #swfc

Was Patrick Vieira forced to suffer the indignity of throwing a string of onions around his neck on signing for Arsenal that same summer? Was Nayim given a matador’s cape at the Lane? Perhaps Carbone should be grateful that the local fancy dress shop was all out of Super Mario attire.

If that is indicative of the small-mindedness that was prevalent during that strange mid-nineties period that saw England patriotically reclaim football as its own following a successful Euros before promptly bringing in players from every corner of the globe, it didn’t help that Carbone adhered to almost every stereotype we held at the time for players with plenty of vowels in their surname.

On the positive end of the scale he was as beautiful as us craggy. Brits like to believe all Latin men have flowing hair that could have equally adorned a statue in Florence or a sixth-form wannabe guitarist who pulls your sister. Had that pretty face gone out on the lash around Sheffield with David Hirst and Andy Booth it would have stuck out like a sore thumb but that was never a concern anyway because Beni was teetotal, choosing to always stay in and presumably absorb the poems of Pavese.

FORGOTTEN GOAL: Benito Carbone for Wednesday vs Forest from this weekend in 1998.

That finish couldn’t be any sweeter if you dipped it in a pint of Dairy Milk. pic.twitter.com/w4Ne1QbCMQ

This reluctance to muck in and forge bonds with team-mates caused serious problems at Wednesday and caused problems at Aston Villa too when he transferred his silky skills to the Midlands in 1999.

“It wasn’t easy, the culture was very different and I made the mistake to behave as an Italian in England,” he admitted years later. “I had to mix with other players, learn English culture and live as an English guy, but I did not understand that at the time.”

If this alienated him in the changing room his actions on the pitch also ensured he was always viewed as a guest dropping by to the Premier League’s newly-formed culture club rather than being a fully paid-up member. He flitted from club to club, playing for five in total during his time here – two of them on loan – and if this was true to form for a player who could fairly be described as a ‘journeyman’ across his career it also tallied with a prejudicial take the English had of foreign players during that era. Back then scepticism was piqued that incoming superstars from overseas had little interest in putting down roots and committing to a cause: that they were only here for what they could get.

20 years ago today Benito Carbone did this…. pic.twitter.com/1nP5zzV6ou

The brilliance, charisma and longevity of Zola, Henry and a great many more eventually dispelled that notion and soon enough the English game became a global playground where nationalities mattered very little. Before it did though another Brexity preconception persisted and grew, to the point where it became almost a parody: could flair players, particularly from abroad, do it on a cold, wet Wednesday night in Stoke?

This oft-used analogy was usually squared at those who could be sensational when it suited but had a propensity to disappear in tough times and this sadly applies to Carbone for all his honest endeavour. Barring a fruitful relationship up front with Di Canio at Wednesday and a brief purple patch at Bradford he was very much an erratic sort, the kind who could grey manager’s temples through anonymous displays strung together for months at a time. “As far as I’m concerned you can say bollocks to that Fancy Dan s**t,” was manager Danny Wilson’s brutal assessment after one particularly ineffective performance.

2 – Benito Carbone is the only player to score a Premier League goal on Valentine’s Day in two different years (1998 and 2000). Handsome. #Valentines pic.twitter.com/0veGsa9i9l

Then there were Beni’s disciplinary issues of which there were many. Once again this directly corresponds with entrenched prejudices held by us Brits because this remember was the nineties; a recent but unenlightened era that believed any sportsman native to the peninsula must by default be ‘hot-headed’.

For Wednesday he was once sent off for head-butting Kevin Gallagher while a lazy pass towards the end of his spell at Hillsborough resulted in his team-mate Hirst grabbing him by the throat. On being subbed in a reserve game the striker promptly headed for the airport and flew back home for a spell and later at Villa an unseemly contract spat caused a fracture between the club and its fan-base. Ron Atkinson meanwhile, his second manager at the Owls, would reward him with boiled sweets for excelling in training, an insight that says a good deal.

If this is beginning to read like a hit job on a hit-man that is anything but the intention. It remains a fascinating conjecture however that due to his inconsistency, reluctance to ‘fit in’, and undoubted petulant streak no player before or since has more aligned himself to the negative tropes we had of foreign players before foreign players stopped being a talking point.

Yet for all these failings Benito Carbone was unquestionably a bit special. If not he would barely be a footnote and certainly not warrant a thousand-plus words of retrospection here. There was alchemy in his boots and because of this Wednesday, Villa and Bradford fans love him still because at least twice a season he provided moments they will cherish forever. He was a player for moments.

On the opening day of the 1997/98 season at St James Park, the little wonder cushioned a speculative long ball with his chest, his back to goal. He flicked the ball up to head height before enacting a bicycle kick so delicious and perfect it made grown, hardened men gurgle like infants.

For Villa, during his season-long stint that showcased the best and worst of him, Beni nonchalantly curled home a 35-yarder against Leeds that impressed not just through its immaculate execution but because he went for the near post. No other player would have done that. None would have dared.

Throw in a whole compendium of deft flicks and sumptuous passes and he makes for a great highlights reel.

Benito Carbone had the ability to captivate and infuriate and often in the same passage of play and until we knew any better – in both senses – that was enough to have him considered one of the best the continent had to offer. How highly he is rated beyond that though really does come down to how much our memories play tricks on us.

See Also: Faustino Asprilla: The mercurial Colombian who could win a game on his own – if he felt like it