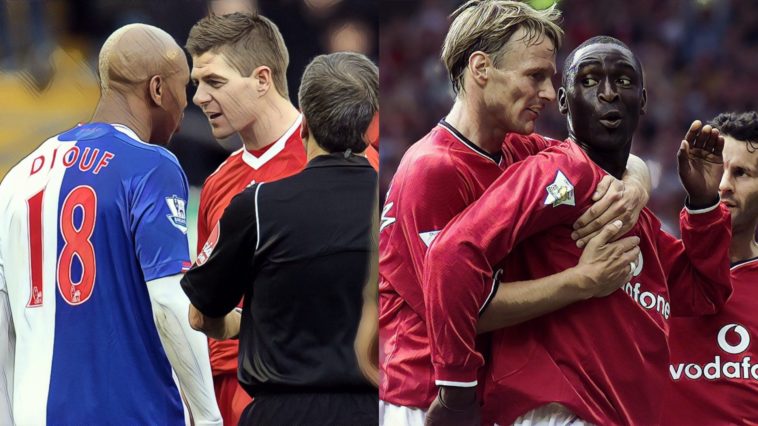 Today marks the anniversary of one of the Premier League’s most notorious moments, when Newcastle midfielders Kieron Dyer and Lee Bowyer turned on each other in a clash with Aston Villa.

Frustrations boiled over as both players were dismissed for an on-pitch scuffle that lives long in the memory, the Magpies’ midfielder’s civil-war coming in the midst of a 3-0 humbling at St James’ Park.

Football is often about team spirit and unity, but in some cases players simply don’t get on and throughout the years there have been some famous feuds between teammates.

Five of the biggest feuds between teammates in football:

Perhaps the most notorious feud between teammates of the Premier League era, the discord between Teddy Sheringham and Andy Cole all started because the former didn’t shake the hand of the latter during a substitution in an England game.

“I walked onto the pitch, 60,000 or so watching,” Cole recalled of his international debut against Uruguay in 1995. “Sheringham is coming off. I expect a brief handshake, a ‘Good luck, Coley’, something. I’m ready to shake. He snubs me. He actively snubs me, for no reason I was ever aware of then or since.”

That’s why, despite playing together for four years at Man United, they never spoke a word to each other. “I know you don’t speak to Teddy and he doesn’t speak to you, but at least you play well together,” Gary Pallister once remarked to Cole.

And at the end of the day, they won absolutely everything together, so that’s all that counts, right?

There may not be a more hated former player among the Liverpool faithful than El Hadji Diouf. Arriving on the back of his performances for Senegal at the 2002 World Cup, the striker never repaid the £10 million fee the club splashed out on him, scoring just six goals in 80 appearances.

Diouf was also a toxic presence in the dressing room and had no respect for Steven Gerrard, in fact he actively despised his captain for some reason. The two players had a bust-up at half-time of a pre-season match in which Diouf apparently told the Liverpudlian he would “fuck his mum”.

Over the years Diouf has had numerous swipes at Gerrard, accusing the former midfielder of “killing” the club, claiming he was “jealous” of him, and that he “did nothing for his country”.

Gerrard wrote in his autobiography that Diouf was the player he “liked least” during his time at the Merseyside outfit, accusing him of having no real interest in football”. Diouf didn’t take kindly to that, evidently.

The Liverpool legend wasn’t the only one he got on the bad side of. Jamie Carragher called Diouf the worst footballer he ever played with.

“Actually, I quite enjoyed playing against him as you could kick him then – can’t kick your own players,” Carragher admitted.

“His attitude disgusted me.”

There wasn’t a backup goalkeeper that Jens Lehmann didn’t hate with a passion, but his animosity towards Bayern Munich legend Oliver Kahn was notorious in the mid-noughties.

The two goalies competed with each for the number one jersey in the German national side, taking many a swipe at each other over the years. Kahn poked fun at his counterpart losing his place at club level to Manuel Almunia, while Lehmann said his nemesis took himself too seriously.

“I don’t have a 24-year-old girlfriend. I have a different life,” the Gunners ‘keeper once quipped. Kahn had an ignominious affair with a 21-year-old Munich barmaid while his wife was heavily pregnant in 2003.

The Arsenal shot stopper, who did eventually get the nod for the 2006 World Cup, also feuded with clubmate Manuel Almunia, one of the game’s nice guys.

“To be sitting on the bench behind somebody who only started to play when he was 30 is not funny,” the German once said. Almunia admitted: “To have someone here who hates me is just amazing. I know he hates me.”

In 2007 Liverpool earned a massive 2-1 victory over Barcelona in the opening leg of their knockout tie with both John Arne Riise and Craig Bellamy getting on the scoresheet. It was a tad ironic those two got the goals considering the events of the previous week.

After a team night out during a warm weather training camp, Bellamy attacked Riise with a golf club in his hotel room because the full-back refused to sing karaoke. The Norwegian later wrote that he was lucky his shins weren’t broken and career ended there and then.

The Welsh forward celebrated his equaliser by performing a mock golf swing, revealing the “sincerity of his apology” for his cowardly act of violence. The two did embrace at the end of the first leg though and went on to eliminate the reigning champions from that season’s competition.

An oft written trope in sitcoms is the woman who gets between two male friends, but the episode between Mauro Icardi and Maxi Lopez was like something out an episode of Footballers’ Wives.

The pair were best mates while playing together at Sampdoria, but the friendship naturally disintegrated when Icardi married Lopez’s ex-wife, Wanda Nara.

Shortly thereafter Icardi left for Inter, but the two were reunited in 2015 when the Milan outfit faced Torino, Lopez’s new club. As you can imagine, Lopez didn’t want to shake his former friend’s hand in the pre-match ritual.

“Unfortunately these things happen, it depends on the ignorance of certain people,” Icardi said afterwards. “I gave my hand; I am polite.”

Icardi then went on to get Lopez’s children tattooed on his arm. Bit weird, that.