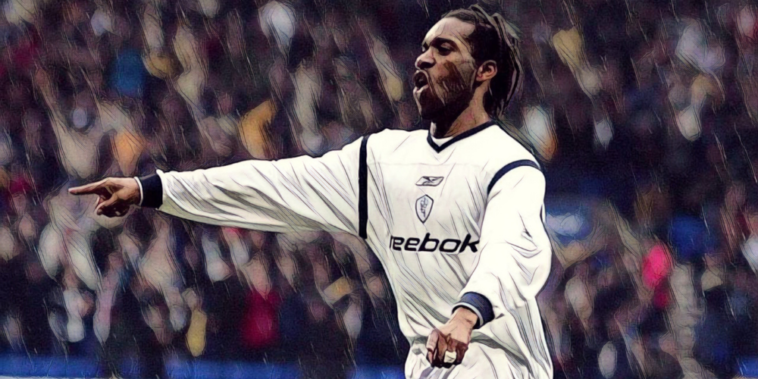 According to the popular terrace chant from fans wowed by his showmanship style, Jay-Jay Okocha was “so good they named him twice”.

Okocha’s outrageous gifts proved captivating viewing throughout a nomadic career for the Nigerian, who danced and dazzled his way through opposition midfields with a signature smile upon his face.

There have been few players in recent memory who brought Okocha’s level of flair and fun-factor, a memorable spell in the Premier League enhancing his legend amongst fans of English football.

Okocha’s story began on the streets of Enugu, Nigeria, where the football-crazed youngster honed his talents with any round object available.

Possessing a dream of making it as a professional in Europe, his opportunity came by chance.

Following a holiday to Germany in 1990, he impressed after asking permission to join in training with third tier Borussia Neunkirchen, who had friend and compatriot Binebi Numa amongst their ranks.

Fast forward a year and the emerging midfielder made the step up to the Bundesliga with a move to Eintracht Frankfurt, but an initial promising start soon turned sour and a fall-out with manager Jupp Heynckes saw Okocha – alongside teammates Tony Yeboah and Maurizio Gaudino – depart for pastures new.

Fenerbahce won the race for his signature and secured the Nigerian in a £1m deal, with Okocha making an immediate impact after netting on his Süper Lig debut against Samsunspor – a bending finish from distance that would become a trademark of his career.

It took little time for Fenerbahce’s maniacal support to take to the free-spirited footballing talent, a blend of immaculate close control, daring dribbles and set-piece ability marking Okocha out as a fans’ favourite.

Okocha’s catalogue of stunning strikes seemed to grow ever longer with each passing performance, including a phenomenal free-kick in a 4-0 thrashing of eternal rivals Galatasaray – a sure-fire way to cement his status amongst the Fenerbahce faithful.

The Turkish side were ultimately pipped in a tight title race despite the best efforts of the extraordinary Okocha, who finished the campaign recognised as one of the division’s leading players and with 28 goal involvements.

League title success proved elusive once more the following campaign despite another strong showing from Fenerbahce’s creative catalyst, whose performances were recognised with interest from abroad.

Success on the international stage – including winning the 1994 Africa Cup of Nations and Olympic gold two years later – had shot Okocha into wider consciousness and a series of impressive performances at the 1998 World Cup in France piqued interest from Paris.

Paris Saint-Germain made Okocha the most expensive African footballer of all time that summer, investing £14m to prise the fan’s favourite from the Şükrü Saracoğlu.

PSG were far from the billionaire-backed behemoth they have since become, but the Nigerian found himself amongst a cult side during the late nineties and early 2000s, his teammates including names such as Laurent Robert, Nicolas Anelka and Ronaldinho – each capable of the sublime.

The latter in particular is believed to have benefitted from his period alongside Okocha, their ideologies intertwined as two footballers whose expressive extravagance left a lasting legacy.

Four seasons of flamboyance in France came to an end in the summer of 2002, when after representing Nigeria at that summer’s World Cup, Okocha pitched up at the most unlikeliest of destinations.

Bolton had survived relegation from the Premier League by the narrowest of margins the previous season, but had somehow convinced one of Africa’s greatest exports – still just 28 – to make the move to north-western England on a free transfer.

Sam Allardyce’s gritty side had been in search of greater guile, but the polarising perceptions of Okocha and his new manager screamed with every fibre that this was a move that shouldn’t work.

The relationship between the club and player did not just function however, it flourished.

Allardyce – a man whose up-and-at-’em style ruffled feathers and whose chewing gum could reasonably have been gravy flavoured – released his statement signing from shackles and afforded Okocha a freedom he may not have been granted at one of Europe’s elite.

The results were spectacular.

Even in a debut campaign disrupted by injury issues the gifted brilliance of Okocha shone through, scoring seven goals – many coming in spectacular fashion – to help Bolton survive the drop.

Forming a fine partnership with Youri Djorkaeff, the duo were the first of several star names to enjoy Indian summers at the Reebok Stadium, with the likes of Ivan Campo and Fernando Hierro sprinkling further continental stardust on Bolton’s British core.

More than a tangible impact in terms of goals and assists, it was the mesmeric manner in which Okocha approached the game that ensured his everlasting legacy.

His football on occasion better resembled a football freestyler, performing unconventional and utterly brilliant tricks, flicks and making fools out of opposition players.

He wriggled past and rode challenges in midfield and worked his way out of tight spaces in improbable fashion, from rainbow flicks to rabonas and everything in between.

This was an exaggerated video-game simulation often unfolding before our very eyes.

"So good they named him twice!" 🇳🇬

The instinctive invention of Okocha has never been replicated in the Premier League, with even the most skilful of stars a level down from the captivating confidence the Nigerian displayed.

There was little thought of opposition or occasion, Okocha bringing his unorthodox genius whenever he crossed the white lines of a Premier League pitch.

Named as captain at the start of his second season, it was the midfield magician who proved the creative fulcrum behind Bolton’s rise, reaching the League Cup final in 2004 with Okocha scoring two stunning free-kick goals in the semi-final first leg win over Aston Villa.

His second was arguably the highlight of his time with Bolton, an extraordinary effort with the outside of his devastating right boot.

The free-kick, wide to the right of the Villa penalty box, looked better suited to a cross, only for Okocha to wind up a sensational set-piece after lashing the ball round the wall and into the top corner.

🌍 One of the best African footballers to play in the @premierleague.

It’s an era that remains one of the fondest in the club’s long history and their west African wizard, possessing a swagger and gripping hedonistic playing style was central to that success.

He was removed as captain in 2006 before a brief spell in Qatar, later returning for an even shorter stint back in England at Hull City.

The best of his brilliance on these shores undoubtedly came at Bolton however, where his fearless approach and willingness to embarrass illustrious opponents was box-office viewing.

The party pieces and elastic-legged excellence will not be forgotten from one of the Premier League’s great entertainers.