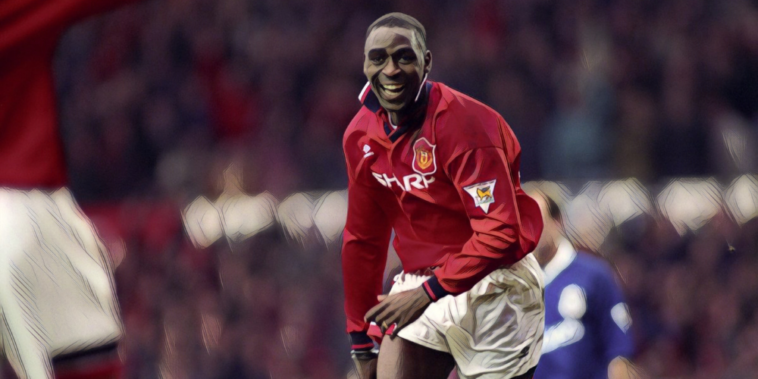 Ask any Premier League fan to name the division’s finest forwards and you will no doubt be greeted with similar answers.

Alan Shearer – scorer of a record 260 goals in the Premier League – will have plenty of supporters, whilst Thierry Henry has often been cited as the league’s finest ever footballer following an incredible career in the colours of Arsenal.

Eric Cantona’s impact on Manchester United’s dominance of the division’s first decade increases his claims, whilst goalscoring greats such as Sergio Aguero and Wayne Rooney will be regularly regurgitated in the minds of more modern fans.

One name who has often found himself as a forgotten figure, however, is Andy Cole.

Just a quick glance over the career of Cole makes his a curious omission, a footballer who trails only Shearer and Rooney for goals scored in the Premier League era. Remove penalties from the equation – Cole took just two during his career despite a prolific touch around goal – and the numbers are even more impressive, bettering even Shearer for goals-per-game at Premier League level.

Throw in five Premier League titles, an integral role in arguably English football’s greatest season as Manchester United won the treble, and a joint-record of 34 goals scored in a Premier League season and it’s increasingly hard to point to why Cole often finds himself as the odd man out.

He is, however, a forward well worth celebrating.

Cole’s career was defined during his time at Manchester United, but he first adorned the colours of Arsenal where he came through the ranks but made just two senior appearances.

In search of permanent first-team football he dropped down to sign for Bristol City, where a healthy goal return soon sparked interest from an ambitious Newcastle United.

Kevin Keegan made Cole the most expensive player in the Magpies’ history and strong second half of the season following his mid-season arrival – scoring 12 goals in 12 league appearances – contributed to the club’s promotion to the Premier League.

Newcastle’s return to the top division in 1993/94 began with successive defeats, but Keegan’s ambitious and adventurous side – bolstered by the signing of Peter Beardsley from Everton – soon began to make an impression.

Cole scored an equaliser as the Magpies earned their first point of the season at defending champions Man United, the first of what proved an unforgettable season for the young forward.

He scored again in draws with Blackburn and Ipswich, before netting a braces in wins over both Sheffield Wednesday and West Ham at St James’ Park.

Enjoy one of the best of Andy Cole's 187 #PL goals 👏#GoalOfTheDay // @NUFC pic.twitter.com/UBvGH6Q0UI

Cole’s partnership with Beardsley proved a devastating combination of guile and goalscoring instinct, the dovetailing duo scoring 10 goals in four consecutive wins through October and November.

Cole hit a hat-trick in a 3-0 win over Liverpool during that sequence and ended the season with a record-breaking 34 goals, a figure which has never been bettered during the Premier League era.

He was named as the PFA Young Player of the Year after leading the Premier League for both goals and assists (13), a feat only since matched by Jimmy Floyd Hasselbaink (1998/99) and Harry Kane (2020/21).

Newcastle finished the season third and secured UEFA Cup qualification, but the Magpies were rocked mid-way through the following season as Cole departed in a British transfer record deal.

Manchester United came calling and secured his signing for a fee of £6m and Keith Gillespie (valued at £1m), adding the sharp-shooting Cole to an abundance of attacking options at Old Trafford.

Cole faced competition for places but showcased his threat during his early months with the Red Devils, including becoming the first Premier League player to score five goals in a fixture during a 9-0 thrashing of Ipswich Town.

His season ended in disappointment, however, as Cole squandered a host of chances during United’s draw at West Ham on the final day, a result which handed Blackburn Rovers the title. He was also absent (cup-tied) as the Red Devils were beaten by Everton in the FA Cup final.

Trophies, however, were not far away.

The following season brought a domestic double with Cole scoring 13 goals in all competitions, including a decisive early opener against his former side in late December as the Red Devils overturned a 12-point deficit to beat Newcastle to the title.

Cole endured a difficult 1997/98 that included a double leg-break in a reserve game with Liverpool, whilst the arrivals of Ole Gunnar Solskjaer and Teddy Sheringham – the latter a teammate he infamously failed to see eye-to-eye with – increased the competition for places at Old Trafford.

Cole had failed to truly click in a front pairing since his time with Beardsley at Newcastle, but that all changed following the arrival of Dwight Yorke from Aston Villa in 1998.

Sir Alex Ferguson had not signed Yorke with the idea of partnering Cole in mind, but their chemistry was undeniable from the infancy of their time as teammates, each scoring after being thrust together during a win over Southampton in October.

From there the two spearheaded the greatest season in Manchester United’s history, with their exploits on the Champions League stage cementing their place in the Red Devils’ pantheon of greats.

The footballing Amphitheatre of the Camp Nou was the stage for a sublime piece of synergy, as Cole and Yorke combined in clinical fashion during a thrilling group stage draw at Barcelona.

Yorke scored twice in Catalonia, but it is Cole’s goal that has remained iconic, a passage of play that saw the telepathy of the duo shine through in a Champions League classic.

Cole and Yorke found themselves on the same wavelength, each equally happy to drop deeper as the other stretched defences with attacking dynamism, whilst there was little of the selfishness often found in elite forwards.

The relationship between the duo flourished on and off the pitch, the close friends scoring 53 goals combined as Ferguson’s side won the Premier League, Champions League and FA Cup.

Cole scored crucial goals throughout the campaign including a semi-final clincher at Juventus in the Champions League and the opener against Tottenham on the final day of the Premier League season, a victory which ensured United beat Arsenal to the title by just a single point.

Cole and Yorke continued to fire in 1999/2000 as the Red Devils won the title by a then-record margin, but the height of their potent partnership lasted little more than those two stunning seasons.

Even at this peak of his club career, Cole failed to make an impression on the international stage, perhaps contributing to how his legacy has since been viewed.

The nineties was a period in which England had a wealth of centre-forward options, with the likes of Alan Shearer, Sheringham, Robbie Fowler, Les Ferdinand, Ian Wright and Michael Owen all amongst his competition.

Cole scored just once in 15 appearances for the Three Lions, whilst the comments of former England boss Glenn Hoddle that the forward was a footballer who needed five chances to score was an unfair – and unsubstantiated – claim that sadly stuck as a stigma.

Such was his struggle for recognition with England, he failed to earn a single cap during his record-breaking 1993/94 season with Terry Venables opting to overlook the Premier League’s leading scorer – a scenario unimaginable in the modern day.

Cole departed from Manchester United after a third title in succession was won in 2001, signing for Blackburn after scoring 121 goals across his seven seasons at Old Trafford.

There were glimmers of the old magic including a League Cup final winner against Tottenham, whilst a wondrous dipping effort against Liverpool was a highlight of his time at Ewood Park.

Yorke even joined him briefly for a final swansong of their clinical collaboration, helping Blackburn to UEFA Cup qualification after finishing sixth in the Premier League.

Cole’s falling out with manager Graeme Souness led to a move to Fulham and it was the start of a nomadic end to his colourful career, spending time with six clubs – including Manchester City, Fulham and Portsmouth – before hanging up his boots as the Premier League’s second-highest scorer at the time of his retirement.

Whilst Cole will perhaps never be as universally appreciated as many of his centre-forward contemporaries, his records stand up with some of the finest footballers of the Premier League era.

He was explosive and electric when at his best, running off the shoulder of the last defender and possessing a pleasing variety to his finishing, from impudent chips to driven efforts which failed to deter from their flight path.

No player has ever reached 50 goals in the Premier League faster than Cole, who took just 65 games of an incredible breakthrough with Newcastle to achieve the feat. That record is one faster than Shearer and three quicker than Ruud van Nistelrooy, two footballers often lauded for their ruthless goalscoring genius.

For Cole the numbers will always tell the story of one of the best Premier League goalscorers of his generation, even if the narrative has often failed to match.