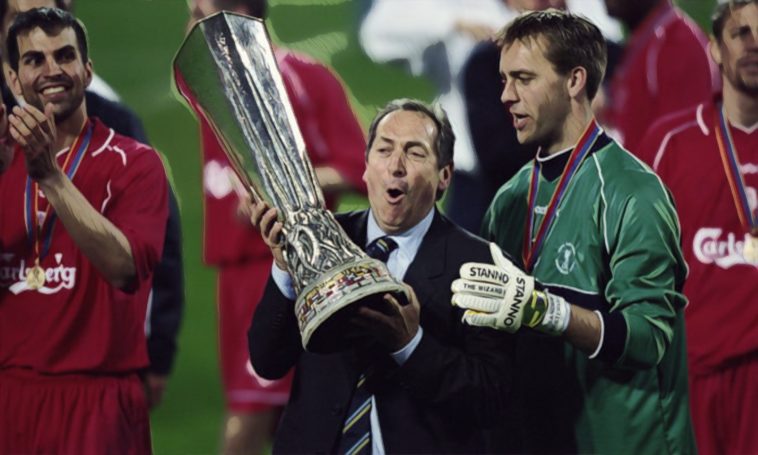 Gerard Houllier’s legacy at Liverpool is often closely tied to the treble of trophies won in 2001, but he also laid the path for Istanbul and beyond.

The late Frenchman didn’t just manage a group of players in his six years in charge, five months of which was spent in a bizarre partnership with Roy Evans; he modernised an entire club both on and off the pitch.

Implementing what he called a five year programme to rebuild the squad, he set about changing the culture at the club. Liverpool had become less well known for winning in the nineties and more notorious for the ‘Spice Boys’, excessive drinking, and white suits at the 1996 FA Cup final.

The game had moved on, but Liverpool hadn’t. They needed an outside influence to shake things up and the former France national team manager was the ideal candidate. He was an outsider, but had an intimate knowledge of the city having taught there earlier in his life.

“He knew what it was to be a Liverpool manager,” his former assistant Phil Thompson told liverpoolfc.com following news of Houllier’s passing. “You have to get not just our football club, because people know about our history, but you have to get the people and Gerard got us very, very quickly.

“He used to say to me: ‘Phil, I used to stand on the Kop and watch you in that great Liverpool side!'”

His goal was not to turn everything inside out all at once, but to make incremental change while keeping the ethos of the club intact. Diets were improved, training moved away from basic five-a-sides, and the drinking culture was phased out.

It was hardly groundbreaking stuff, but it was a culture change for the players and staff. No one had attempted this at the club before. Liverpool had always erred on the side of stability and tradition when it came to the man on the touchline, replacing the last manager with the next ‘homegrown’ coach as part of a well-trodden succession plan.

Bill Shankly, Bob Paisley, Joe Fagan, Kenny Dalglish, Graeme Souness, Roy Evans; this was the club of the famous Boot Room after all. Houllier not only broke this lineage, he was the first ever Liverpool manager not born in England, Ireland or Scotland. Since then their three most successful managers of the past two decades have been foreigners.

The phrase that continually comes up when former players talk about Houllier’s reign is ‘discipline’, an attribute that had not been in abundance among squad members prior to his appointment. He sold Paul Ince, Jason McAteer, David James and Steve Harkness among others to get the ball rolling, while putting in place more continental training methods.

When the team won the FA Cup in 2001, Houllier insisted there was to be no boozing. The same went for the Uefa Cup final, after which they supposedly had just one glass of champagne each ahead of the final match of the season, a meeting with Charlton that would decide whether they qualified for the Champions League or not.

Some players likely had more than one glass, but that’s neither here nor there. The point is that in days gone by, the team would have gone on a bender at the first sight of success, shown up to the Charlton game bleary eyed, and jeopardised their chances of qualification. It was their newfound discipline that steered them away from such a scenario, qualifying for Europe’s premier competition for the first time as well as ensuring they were capable of withstanding a 63-game season.

Houllier was also the man to bring through local lads Steven Gerrard, Michael Owen and Jamie Carragher from the academy to the first team. Those three were always going to make it in the professional game, but his guidance put them on the right course and each one had a huge impact. He saw the natural leadership abilities in Gerrard, giving him the armband when he was just 23.

Absolutely devastated by the news about Gerard Houllier, I was in touch with him only last month to arrange him coming to Liverpool. Loved that man to bits, he changed me as a person & as a player & got @LFC back winning trophies. RIP Boss. 💔

Houllier didn’t get everything right, of course. The tactics, considered one-dimensional and overly defensive, were eventually found out by opposition managers before long. He overplayed Owen to the point where his legs were virtually ground down to dust, taking away any hope of career longevity. And recruitment, particularly in the latter part of his reign, was inadequate; the name El Hadji Diouf is enough to make Liverpool fans shudder.

But even with those faults he brought the club six trophies after a decade of mediocrity, a cup final victory over Manchester United, and the closest they had gotten to the title since 1990. More importantly he reset the club’s mentality and redirected it into the modern era, particularly with the upgrades to the Melwood training complex that happened under his watch.

In 2004 Houllier had to make way for someone else to take them to the next level, which they did by winning the Champions League the next season with largely his team. But he laid those foundations, setting them on their way for the next two decades. And that is his true legacy at Liverpool.