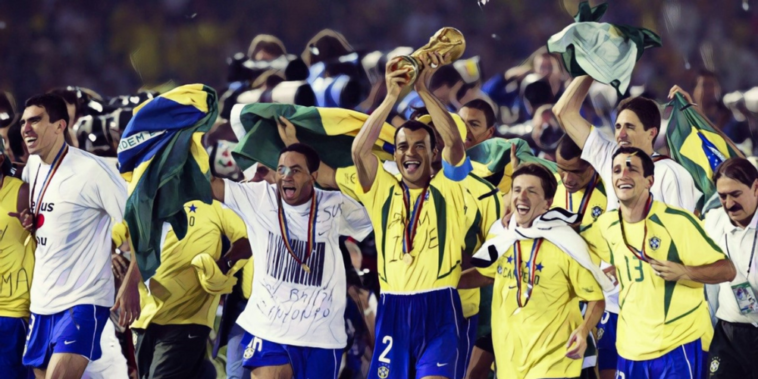 Brazil were crowned world champions for a fifth time in 2002, as the samba stars of the South American nation won the first World Cup held in Asia.

Japan and South Korea co-hosted the event, which was the first tournament hosted outside of Europe or the Americas, with the Far East providing a unique backdrop to a memorable finals.

In a tournament of upsets and surprise packages, it was a familiar face whose name was etched onto the trophy as Brazil beat Germany 2-0 in Yokohama.

Two decades on, we remember the iconic Brazil team that won the 2002 FIFA World Cup.

Marcos became a club-great at Palmeiras during a one-club career with the Brazilian side, in which he made 533 appearances across almost two decades as number one.

The goalkeeper featured in every fixture of Brazil’s triumphant campaign in 2002, as he earned the nod as first-choice ahead of Dida. Marcos kept four clean sheets and conceded just four goals as Brazil were crowned World Cup winners for a fifth time, but lost his place as the Selecao’s shot-stopper soon after the tournament.

He earned just four more caps post-World Cup success and was left out of the squad that travelled to the 2003 Confederations Cup.

Lucio arrived at the tournament following a season of heartbreak at Bayer Leverkusen, as his club side saw treble hopes implode to finish as runners-up in the Bundesliga, DFB-Pokal and Champions League.

The centre-back atoned for those near misses with an impressive World Cup campaign, as Brazil marched towards a fifth world title. One of the best defenders of his generation, Lucio won over a century of caps for Brazil during a decade at the top of the game.

After leaving Leverkusen he won multiple honours during spells at Bayern Munich and Inter Milan. He won a hat-trick of German domestic doubles with the former, before forming part of Jose Mourinho’s treble-winning Inter team in 2009/10.

Edmilson exerted understated influence on Brazil’s triumphant team, with the former Lyon and Barcelona star operating as part of the Selecao’s back three.

Equally adept at centre-back or in midfield, he featured in six of Brazil’s seven games and scored his only international goal during the tournament with a spectacular overhead kick in the 5-2 group stage win over Costa Rica.

🤔 Can you imagine scoring your only international goal with one of the most spectacular in #WorldCup history? Edmilson can 💛

🎁 Happy 45th birthday to one of the most elegant players of his generation 🤵‍♂️@Edmil5onOficial | @CBF_Futebol pic.twitter.com/vFTSv02OX5

At club level, he won five league titles across spells at Lyon and Barcelona and formed part of the latter’s Champions League winning team in 2005/06.

Roque Junior completed the back three for Brazil, where he was significantly more solid than during a disastrous spell in the Premier League.

The defender won 48 caps for the national side and was a reliable member of their World Cup winning team, before helping AC Milan to Champions League success the following season. He is one of four players to have won the Copa Libertadores, World Cup and Champions League, alongside 2002 teammates Cafu, Dida and Ronaldinho.

His move to Leeds ahead of the 2003/04 campaign proved a nightmare experience however, and began with a 4-0 defeat to Leicester with the club in turmoil on and off the pitch. He was sent off in the following fixture and things failed to improve from there. Leeds conceded 25 goals in the defender’s seven appearances, failing to register a win and suffering six defeats.

Cafu is a bona-fide legend of the sport and one of Brazil’s all-time greats, with the right-back racking up a record-breaking 142 appearances in the colours of the Selecao.

He is the only player in history to have appeared in three consecutive World Cup finals, emerging on the victorious side in both 1994 and 2002. The latter success came as captain, with the imagery of Cafu stood on a raised podium with the trophy among the most iconic in Brazil’s history.

The rampaging right-back won it all during a career of boundless energy that saw him nicknamed ‘The Express Train’. In addition to his two World Cup titles, he lifted two Copa Libertadores titles with São Paulo, Serie A titles with both Roma and Milan, the Champions League with Milan, and two Copa América titles with the national side. Genuine greatness.

The other half of an iconic full-back pairing, Roberto Carlos was viewed as the best left-back in world football at his best.

The thunder-thighed defender with sledgehammer of a left boot starred at the World Cup, where he was named in the All-Star Team for a second successive tournament. He arrived in Japan and South Korea having just helped Real Madrid to a third Champions League title in five seasons, providing two assists in the final win over Bayer Leverkusen.

Only Cafu has ever earned more than Carlos’ 125 caps, while he scored one of his 11 international goals with a thumping free-kick against China during the group stage.

Iconic Duos: The prototypes of the modern full back, Cafu and Roberto Carlos

Gilberto Silva was one of the stories of the Selecao’s success, as the midfielder emerged from the background to have a crucial role.

Silva had only earned his first caps in the months prior to the tournament and was expected to play a back-up role at the World Cup, but an injury to captain Emerson saw him thrust into the side.

He played every single minute of the victorious campaign, with his performances earning Gilberto a move to Arsenal. He spent six seasons with the Gunners and made 244 appearances, forming part of the club’s iconic Invincible team that completed the 2003/04 Premier League season without defeat.

Brazil manager Luiz Felipe Scolari called Kleberson the driving force of his World Cup-winning side, insisting that the midfielder ‘was always the first name on the team list ahead of players like Ronaldo’.

Kleberson impressed with his tenacity, having earned his first start of the tournament during Brazil’s quarter-final win over England. His tackle on Paul Scholes led to Brazil’s equaliser and the midfielder later became teammates with Scholes at Manchester United.

It proved an ill-fated move however, as he struggled to adapt to the demands of the Premier League. He made just 20 league appearances across two seasons, before a nomadic career that took in spells in Turkey, Brazil and the United States. Kleberson is currently an assistant coach at New York City FC.

Onto a formidable forward line that was dubbed the ‘Three Rs’.

Ronaldinho was the creative spark behind Brazil’s front two, as the forward announced his arrival as one of world football’s finest in the Far East. His tournament is best remembered for a spectacular free-kick against England, as his looping effort from distance caught out David Seaman for a quarter-final winner.

He was later sent off and suspended for the semi-final, before returning to the line-up as Brazil beat Germany to be crowned champions.

17 years ago #OnThisDay , everyone was asking, did 🇧🇷@10Ronaldinho mean it 🤔

After seeing the player he became, are there still any doubters? 🤙 pic.twitter.com/RYZ3RDqvXU

He signed for Barcelona in 2003, where he cemented his status as one of the all-time greats. Two La Liga titles, the Champions League, back-to-back FIFA World Player of the Year awards and the Ballon d’Or were all collected during an unforgettable spell in Spain that saw Ronaldinho inspire Barcelona back to a place at the summit of the world game.

Rivaldo was a crucial part of Brazil’s successful side, as he scored five goals to finish as runner-up for the tournament’s Golden Boot.

A feigning of injury in a group stage clash with Turkey soured his standing among the masses, but there was little to dislike about Rivaldo’s football as he sparkled in the Far East. One of world football’s finest at his best, he won the Ballon d’Or in 1999.

On this day at the FIFA World Cup 📅:

See all the action from the 2018 @FIFAWorldCup on @ITV pic.twitter.com/8I02lADnen

Rivaldo had been criticised for Brazil’s failures at past tournaments, but was exceptional in 2002 in what proved his zenith for the national side. Such was his impact, Scolari named the forward as the best player at the tournament.

Ronaldo’s redemption was the narrative of the finals, as the forward returned from career-threatening knee issues to write his name into legend.

Ronaldo had suffered a convulsive fit on the eve of the 1998 World Cup final, with the forward appearing a shadow of himself during the defeat to France. He had scored four goals and laid on three assists en route to the final to win the World Cup Golden Ball, but was unable to impact the final.

Four years later he arrived in Japan and South Korea – via an arduous road of rehabilitation from injury problems – as a man on a mission. He scored eight goals to win the tournament’s Golden Boot, netting in all but one of Brazil’s seven fixtures.

O Fenômeno scored both goals in the 2-0 win over Germany in the final and ended 2002 as winner of the Ballon d’Or and FIFA World Player of the Year awards. Even after his knee problems, he was still a footballer capable of the spectacular and reemphasised his status as one of the game’s greats in the Far East.

Juninho came on as a late substitute in the final win over Germany, replacing Ronaldinho for the final five minutes.

The midfielder became a popular figure during a memorable Premier League career, in which he had three separate spells at Middlesbrough to become a club legend.

He was named as the Premier League’s Player of the Season despite the club’s relegation in 1996/97, and helped Middlesbrough to their first, and so far only, major honour with League Cup success in 2004.

Denilson became the world’s most expensive footballer after impressing for Brazil at the 1998 World Cup, but struggled to live up to expectations during a disappointing spell at Real Betis.

He won 61 caps for the national side and made five substitute appearances at the 2002 World Cup, including a one-minute cameo in the final after replacing match-winner Ronaldo.