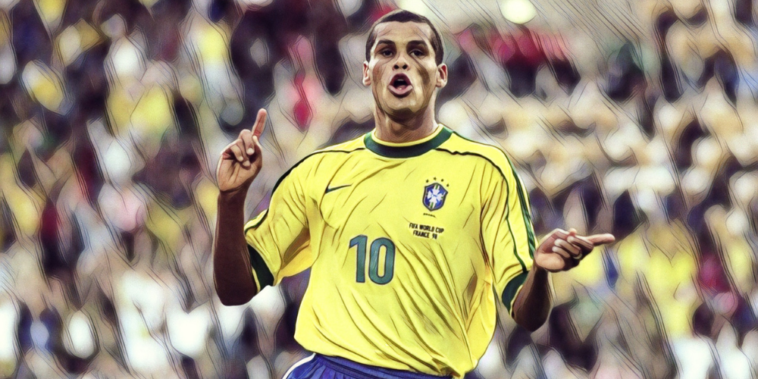 The connotations of Brazilian football is perhaps of the sport in its most joyous and unadulterated form, the South American nation held in a special affinity since its first wave of Samba stars conquered world football in 1958.

The famed yellow shirts and expressive footwork of Brazil’s best has captivated audiences across the globe, with few countries having ever produced such a roll call of fabulous footballing talents.

Amongst their very best, was Rivaldo.

Throughout his time as one of world football’s most exhilarating talents, Rivaldo developed a penchant for the spectacular, a footballer who produced moments that made the minds of supporters almost implode in astonishment.

Troubled childhoods are not uncommon in the stories of South American superstars and Rivaldo’s upbringing was amongst the most challenging of those to have reached the sport’s summit.

Born into abject poverty in a tough favela in Recife, in the North East of Brazil, his formative years saw Rivaldo suffer from malnutrition, so severe it caused him to lose teeth. His early life also saw the trauma of losing his father, in a road accident, whilst still a teenager.

Whilst largely written off amid concerns regarding his physicality, he began at local side Paulistano, before his talents caught the attention of Corinthians and later Palmeiras, featuring alongside Cafu as the latter won the Brazilian Séria A in 1994.

Rivaldo gained wider notoriety two summers later as part of the Brazil side at the 1996 Olympics, though his tournament ended in disaster as the gold medal eluded the side.

He missed a string of chances, whilst a misplaced backpass from the forward led to Nigeria’s second goal and kickstarted a turbulent relationship with the national side and its supporters.

His big break at club level came that summer after signing for Deportivo La Coruna, where just a single season with the Spanish side was enough to propel the brilliant Brazilian into the consciousness of Europe’s elite.

Rivaldo arrived as the club’s record signing and scored 21 goals in an unforgettable season, his left foot a lethal combination of both finesse and frightening power.

Expressive and electric across that sole campaign at the Riazor, Rivaldo’s influence propelled Deportivo to a third-place finish in La Liga, but the Galician side were unable to keep hold of their gifted genius for long.

Barcelona – in search of a replacement after Ronaldo’s world-record move to Inter Milan – made their move.

Arriving in Catalonia during a turbulent era for Barcelona, the following seasons saw the height of Rivaldo’s magnificence as he – often singlehandedly – carried the weight of expectation for a Spanish superpower.

Ronaldo’s exit after one sensational season has been a blow for Barca, but in Rivaldo the club had found the perfect player to replace his clinical compatriot.

Rivaldo’s impact was instant, scoring 19 league goals as a first league title in three seasons arrived at the Camp Nou, his sparkling showings illuminating an otherwise pragmatic side under Louis van Gaal.

Often utilised on the left-hand side – much to his dismay and a scenario which led to tension with Van Gaal – he would ignore conventions to drift inside and fire shots towards goal with unerring accuracy.

No matter the distance or angle, providing Rivaldo with a shooting chance often proved costly.

The goals arrived in both quality and quantity, from fantastic free-kicks to dipping efforts from distance and everything in between. He finished his maiden campaign with 28 goals in all competitions, as the Copa del Rey was added to seal a domestic double.

Rivaldo scored 28 goals once again the following season with 24 coming in La Liga alone, as Barcelona defended their title and their electrifying forward cemented his status as one of the game’s best.

That season included a sublime showing in a Champions League classic with Manchester United, a pulsating 3-3 draw a the Camp Nou.

In need of a win to progress against the soon-to-be European champions, Barcelona fell short, but not for the want of trying from their gifted genius.

Rivaldo had earlier netted an equaliser with a bending free-kick to deceive Peter Schemichel, before leaving the Danish goalkeeper exasperated following an outrageous moment of individual inspiration.

Cushioning Sergi’s hopeful cross onto his chest, Rivaldo executed an acrobatic overhead kick to level the scores once more and stun Schmeichel.

📺 Enjoy EVERY goal he scored in this competition 😍@RIVALDOOFICIAL | #MondayMotivation | #UCL pic.twitter.com/qALGjHpc2d

Obscenity became a favoured pastime of Rivaldo during the best of his time with Barcelona, with his performances rewarded with both the Ballon d’Or and FIFA World Player of the Year accolades in 1999.

He was named as the tournament’s best player as Brazil won the Copa America that summer, finishing as the joint-leading scorer with teammate Ronaldo as the Selecao triumphed in Paraguay.

In an era in which the star anointed football’s finest changed season upon season, Rivaldo took his place in the late nineties as the best player in world football.

The early success of his time with Barcelona failed to last, however, and Van Gaal departed following Barcelona’s failure to retain the title, his relationship with Rivaldo having become increasingly fractious.

Carles Rexach stepped in in a bid to turn around the club’s fortunes after the failed succession plan of Lorenzo Serra Ferrer, taking charge of a side in danger of missing out on Champions League qualification.

Fortunately for Barcelona, their trump card remained the peerless Rivaldo.

The final fixture of the season saw Valencia visit the Camp Nou in a winner-takes-all showdown, Barcelona in need of a win to overhaul their opponents and secure a top-four finish.

In one of the most extraordinary individual performances in football history, Rivaldo hit a devastating hat-trick – each its own Goal of the Season contender.

Ruben Baraja’s brace had twice levelled after Rivaldo had fired in spectacular efforts from distance, before the Brazilian scored an astonishing overhead kick from the edge of the area to decide the game.

🇧🇷 Rivaldo with an all-time great against Valencia. 🚲 pic.twitter.com/ixkm4Nls7L

Rivaldo’s career was built on moments of outrageous audacity, goals that were greeted with a collective and sharp intake of breath from those watching on.

For much of his time at Barcelona he had carried expectations, his saviour act against Valencia the highlight of an incredible career in Catalonia that saw 129 goals scored across just five seasons.

His final season proved underwhelming with 14 goals scored and the return of Van Gaal ended his time with the club, released just a year on from his masterpiece against Valencia and just weeks after forming part of Brazil’s World Cup-winning squad.

Alongside Ronaldo and Ronaldinho the trio formed an exhilarating forward line in Japan and South Korea, beating Germany 2-0 in the Yokohama final. Rivaldo’s role had been prominent with five goals scored, including a crucial equaliser as England were beaten in the quarter-finals, a measured finish beyond David Seaman on the stroke of half-time.

His tournament, however, was not without controversy following his part in Hakan Ünsal’s red card against Turkey. Ünsal’s frustrated kick of the ball in Rivaldo’s direction saw the forward fall to the floor, clutching his face when it had struck his leg.

Branded a cheat, it was one of several moments which ensured Rivaldo failed to truly win over the affections of the masses, despite his talent being second to none at the peak of his considerable powers.

Upon returning to club football he signed for AC Milan on a free transfer, though endured a fairly frustrating two seasons with the Rossoneri despite their Champions League success in 2002/03, the forward an unused substitute for the final win over Juventus.

From there his existence in the sport was nomadic, enjoying a renaissance with three successive title wins in Greece with Olympiakos, before fading from the consciousness with stints at sides including AEK Athens, Uzbekistan Super League side FC Bunyodkor and Angola’s Kabuscorp.

It was an underwhelming conclusion to a career of a player who at his height had few genuine rivals, an unstoppable force of nature with a happy habit of making the impossible a reality.

Rivaldo was capable of bending matches to his own want and whim and so often did so in the most spectacular of fashion.