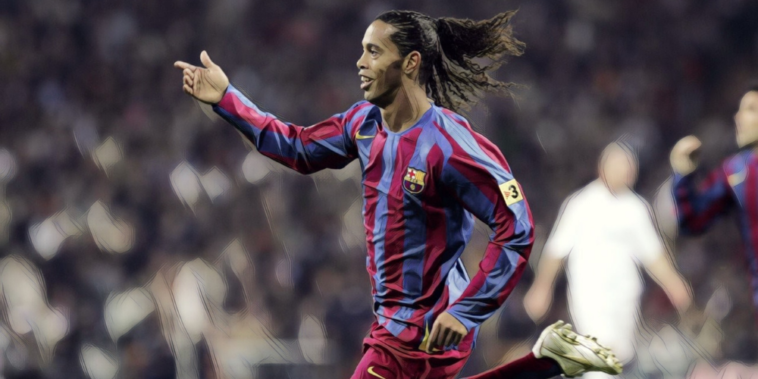 Receiving a standing ovation from the supporters is often acknowledged as the ultimate salute to a player’s performance, with some showings even earning admiration from opposition fans.

Seeing the home of your arch-rivals stand to applaud, however, is almost unheard of.

That incredible honour was bestowed upon the magnificent talent of Ronaldinho, following a sensational showing to dismantle Real Madrid at the The Santiago Bernabéu whilst in the colours of Barcelona.

But for the vanity of the Real Madrid hierarchy, Ronaldinho could have been lining up on the opposite side of the El Clásico divide, the Spanish side turning down the opportunity to sign the player from Paris Saint-Germain after he was deemed ‘too ugly’ to be a marketable asset.

Real instead chose to make the beauty of David Beckham their latest Galactico signing, with Ronaldinho heading to the Camp Nou despite interest from Manchester United.

It was a deal that changed the course of Barcelona’s history.

He arrived in Catalonia with the club struggling to recapture former glories, Barcelona without a major trophy in four seasons and preparing for a new era under the management of Frank Rijkaard and newly-elected presidency of Joan Laporta.

Figures such Johan Cruyff and Pep Guardiola are often rightly credited with their roles in the storied success of Barcelona, but Ronaldinho’s influence in the 2000s was unquestionable in starting a period of unprecedented success.

After winning just one league titles in the five seasons that preceded the brilliant Brazilian’s arrival, Barcelona won five trophies across the star’s five campaigns at the Camp Nou, including two league titles and the Champions League.

Ronaldinho’s expressive style captivated and the individual accolades came alongside team triumphs, winning the Ballon d’Or in 2005 and back-to-back FIFA World Player of the Year accolades.

Barcelona danced to the samba beat of their South American superstar who so often proved the difference on the biggest of occasions, perhaps none more so than an exhilarating Clásico performance in the Spanish capital.

Ronaldinho had recently been named as World Footballer of the Year for the first time and showcased the skills that merited that title in the confines of the Bernabeu.

The two sides were separated by just a single point in the table ahead of the November clash, though from the opening minutes it soon became apparent that this clash belonged to La Blaugrana and their mesmeric number 10.

Samuel Eto’o starred at centre-forward against his former side and a teenage Lionel Messi showed glimpses of the talent that would define the next decade, but at the centre of Barcelona’s breathtaking football was Ronaldinho.

There was one outrageous clipped pass into the path of Eto’o, a ball weighted so perfectly it took out the entire Real Madrid defence, the Cameroonian’s prodded finish wide all that prevented a quite brilliant assist.

The pass in itself was superb, but when considering Ronaldinho executed it whilst looking in the opposite direction, you get an idea of the absurdity those inside the ground were witnessing.

The entirety of the Bernabeu crowd waited with bated breath whenever the Brazilian received possession, his repertoire of tricks tormenting the likes of Michel Salgado and Sergio Ramos.

Whilst Salgado was the unfortunate party tasked with stopping the South American superstar for much of a one-sided contest, it was one Ramos who perhaps felt the full force of Ronaldinho’s wizardry as the youngster was left swinging rash challenges at thin air time and time again.

Barcelona led at the break courtesy of Eto’o’s prodded finish, the forward pointing to the badge and racing to celebrate beneath the president’s box, a two-fingered salute to Real Madrid president Florentino Perez after his forceable ushering of the forward out the Bernabeu exit door.

The second half belonged to the protagonist of this tale, as Ronaldinho moved through the gears in an unforgettable performance on enemy soil.

His first goal came just before the hour, picking the ball up wide on the left and 40 yards from goal, before embarking on a scintillating run at the Real Madrid defence.

Ramos was left for dead after his efforts stop the star were unavailing once more, before Ronaldinho swivelled his hips in signature fashion to side-step Ivan Helguera and fire home to double Barcelona’s advantage.

When Ronaldinho did this against Real Madrid…

And the Santiago Bernabeu gave him a standing ovation 👏

It was a moment of individualistic genius from a footballer at the very peak of his considerable powers.

Ronaldinho repeated the trick once again as he breezed past Ramos once more before firing home, this time racing down the outside of the defender before finishing calmly past Iker Casillas.

Ramos has since developed into one of the greatest defenders of his generation, this nightmare evening against the world’s finest footballer a difficult lesson learned on his road to success.

With that second goal came an iconic moment as the home crowd rose to pay tribute to Ronaldinho’s genius, becoming the first Barcelona player since the legendary Diego Maradona to receive appreciative applause from the Bernabeu crowd.

Those inside the ground knew they were witnessing greatness, made all the more captivating by the manner in which the breathtaking Brazilian played the game.

On this day in 2005, Ronaldinho produced one of the great individual performances. Single handedly dismantling Real Madrid, scoring a brace and getting a standing ovation from the entire Bernabeu 👏

Ronaldinho played football as it should be played, expressive and expansive, care-free and artistic, and with a style that meant almost anything seemed possible with the ball at his feet.

“I will never forget this because it is very rare for any footballer to be applauded in this way by the opposition fans.”

Ronaldinho had just been the shining light of a home humbling and the most emphatic Catalan Clásico victory since Johan Cruyff’s Dream Team, but the Real Madrid faithful acknowledged that this was a footballer who should be cherished whilst in his peerless pomp.

They were right, Ronaldinho’s peak lasted little longer than three years, but at his best there have been few players as enthralling to watch.

Football at the highest level can bring incredible levels of pressure, though Ronaldinho played the game without a care in the world and with that signature smile always upon his face.

Imaginative, inventive and irresistible in possession, he left no shortage of magical moments during his time with Barcelona, but perhaps none more definitive than his destruction of Real Madrid at the Bernabeu.

A joyous genius who left a lasting legacy in Catalonia.