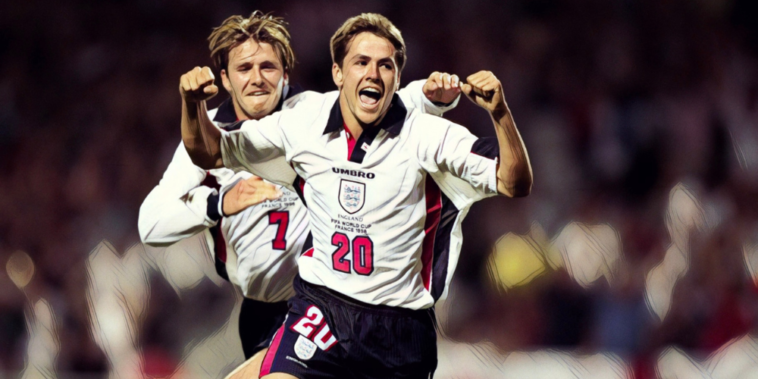 With the World Cup underway, we’ve decided to scroll through the archives and remember some record-breaking feats from past editions.

Here are the five youngest goalscorers in World Cup history.

Nicolae Kovacs is one of just five players to have featured in all three pre-war World Cups, having made his debut during the inaugural tournament in Uruguay in 1930.

The 18-year-old scored as Romania beat Peru 3-1, though the Romanians were eliminated after finishing behind eventual champions Uruguay in the group stage.

Kovacs won 37 caps for Romania and scored six goals, also representing the nation at both the 1934 and 1938 editions of the World Cup. Later in his career he became a dual-nationality player, after earning one cap for Hungary.

Michael Owen burst onto the scene at the 1998 World Cup, as the teenager made his mark in France.

Owen had enjoyed a spectacular first full season at Liverpool, as he became the first teenager to win the Premier League’s Golden Boot and England’s youngest ever debutant and goalscorer at that time.

Included in the Three Lions’ squad for the World Cup, he began the campaign on the bench before making a goalscoring contribution from the bench against Romania. He was then included from the start for a classic last-16 encounter with Argentina and scored one of England’s greatest goals with a scintillating solo run against the South Americans.

🏴󠁧󠁢󠁥󠁮󠁧󠁿 Goalscorer at both the 2002 and 1998 #WorldCups, including a hugely memorable solo effort in Saint-Etienne ⚽️🥅

England lost to Argentina on penalties following David Beckham’s red card, but Owen’s was a star firmly on the rise.

He went on to win the Ballon d’Or in 2001 and scored 40 goals in 89 appearances for England. He is the only player to have scored in four major tournaments for England, having netted goals at the 2002 World Cup and 2000 and 2004 European Championships.

Gavi announced his arrival on the World Cup stage with a brilliant goal as Spain began the 2022 tournament with a seven-goal thrashing of Costa Rica.

Spain beat Costa Rica 7-0 to send a statement of their intentions in Qatar, with teenage midfielder Gavi at the centre of a fine performance. The Barcelona starlet was outstanding on his World Cup debut, as he became Spain’s youngest ever player at the finals.

He marked the occasion with a stunning strike, as he arrived on the edge of the area to volley home Alvaro Morata’s cross with the outside of his boot. It was a memorable moment for a footballer whose rise has been meteoric for club and country.

Winner of the Golden Boy and Kopa Trophy in 2022, he has now added a World Cup goal to his collection and is the youngest goalscorer at a finals since 1958.

Manuel Rosas appeared hell-bent on breaking records at the 1930 World Cup, as the Mexican defender set several landmarks at the inaugural tournament.

He became the first player to score an own goal during a 3-0 defeat to Chile, before going on to become the youngest goalscorer at a World Cup against Argentina. He scored twice in a 6-3 defeat to La Albiceleste, with his first coming from the penalty spot.

It was the first-ever penalty scored at a World Cup, with Rosas claiming a hat-trick of milestone moments despite Mexico’s winless campaign in Uruguay. It took 28 years before his record as the youngest goalscorer was beaten…

Pele’s impact at the 1958 World Cup is among the most iconic imagery in the competition’s history.

The 17-year-old inspired Brazil to a first ever title in Sweden, scoring six goals. After a knee problem delayed his start to the tournament, Pele returned to action with the winning goal as Brazil beat Wales in the quarter-final.

That goal saw Pele become the World Cup’s youngest-ever goalscorer, before he became the youngest hat-trick scorer with a treble in the semi-final thrashing of France.

He added two more goals – becoming the first teenager to score in a final – against the host nation, as Brazil beat Sweden 5-2 to be crowned world champions.

It was the start of a glorious story for Pele in the World Cup, as he became the only player to win the trophy on three occasions. Brazil successfully defended their title in 1962, before winning a third World Cup in 1970.

The word legend is often banded around too easily, but Pele’s achievements cemented his status as one of the game’s all-time greats.