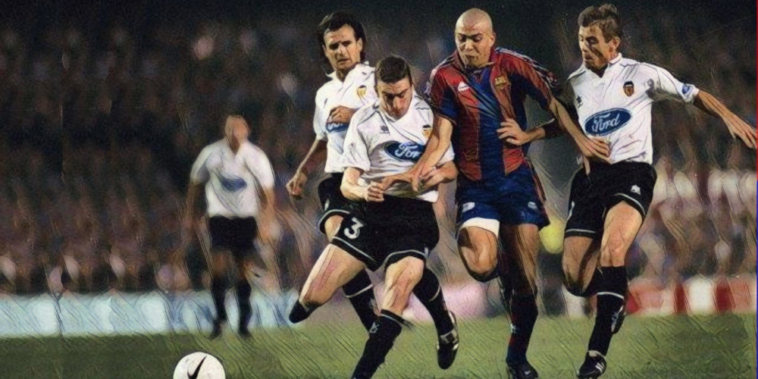 Rarely has a footballer captured the imagination of the world as rapidly as the rise of Ronaldo Nazario.

From the moment the untested teenager crossed the Atlantic in search of success in Europe, spectators were left in awe of an unforgettable talent that still leaves a generation of supporters misty-eyed.

Ronaldo, the brilliant Brazilian version that enjoyed a rapid ascent to become the game’s best player, saw injuries perhaps prevent his chance of being the greatest, but for a short period in his early career there seemed a certainty he would reach unprecedented heights.

Having been taken as part of Brazil’s travelling contingent for their successful 1994 World Cup campaign in the United States, the teenager – on the advice of compatriot Romario – took his first steps into European football with PSV Eindhoven.

His impact was instant as Dutch defences fled in terror from a footballer who became known as O Fenômeno, Ronaldo already a cut above the Eredivisie after scoring 30 goals to win the division’s Golden Boot.

His second season was marred by a knee injury but the teenager averaged almost a goal-per-game once more, with Europe’s biggest clubs circling it would be Barcelona who won the race for his signature – a world-record transfer fee required to prise the phenomenon from Eindhoven.

It was a fee that would be instantly redeemed as Ronaldo embarked on one of the most glorious individual seasons the game has witnessed.

The talented youngster exploded in Spanish football to score 47 goals in just 49 appearances for Barcelona, the forward a whirlwind of chaotic quality as he blurred opposition eyes with frightening footwork at scintillating speeds.

He was a combination of power, pace and technical perfection that has not been seen before or since, with his goals delivering a treble of silverware success to Catalonia as Sir Bobby Robson’s side claimed the UEFA Cup Winners’ Cup, Spanish Super Cup and Copa del Rey.

Defences simply could not cope with the unique qualities of football’s brightest talent, Ronaldo resembling an unstoppable force of nature on occasion – but perhaps never more so than a thrilling clash with Valencia at the Camp Nou in October 1996.

Ronaldo had taken just five minutes to score on his Barcelona debut in the Supercopa de España against Atletico Madrid, before scoring nine times across the opening nine league fixtures of the season, including a sensational solo effort against Compostela.

Running from inside his own half, the forward leaves a trail of desperate defenders in his wake with drag-backs and explosive acceleration to score an iconic individual goal.

There was little opposition sides could do when the Brazilian moved effortlessly through the gears, appearing almost as if he was in a video being operated at twice the normal speed.

Robson’s side were top of the division and unbeaten heading into the clash with Valencia and the visitors would become the latest side to be faced with the daunting task of containing the Catalans’ number nine.

It was Ronaldo who opened the scoring just after a quarter of an hour, picking the ball up deep and wide before powering into opposition territory.

Ronaldo was a player who did things that had not been the standard convention for centre-forwards, picking up possession in unfamiliar positions and dribbling through central areas like an elite winger.

His opening goal against Valencia showcased the individualistic art of his game, drifting inside from the left before turning up the tempo to burst beyond two challenges and place a confident finish beyond Andoni Zubizarreta.

It was two before the break as Valencia’s high defensive line was caught cold, Luis Figo’s raking pass releasing the forward who made no mistake with a drilled left-footed effort to double Barcelona’s advantage.

The visitor’s defenders – gasping for air in a bid to keep pace with Ronaldo – desperately dashed back in vain, though this was a race they were never going to win.

Ronaldo had chances to add to his haul and complete a hat-trick but was uncharacteristically wasteful as Barcelona looked to make the result safe, their squandering of shooting chances allowing Valencia to stage a second-half fightback.

What had looked like a routine win for the league leaders was now in threat of being a missed opportunity to strengthen their pursuit of the title.

Fortunately for Barcelona, they possessed the world’s finest footballer in their ranks.

There was still time for Ronaldo to produce one more piece of genius and cap a sensational solo performance, saving the best for last as he completed one of the best hat-tricks in modern memory.

The ball breaks kindly for the Brazilian just past the centre circle, with little time passing between his first touch and a surge of speed towards the retreating Valencia defence.

Ronaldo scored all manner of goals in which he more closely resembled a PlayStation character as opposed to a man of genuine flesh and blood, his third of the evening another example of his unabated ability to combine speed and skill.

There appeared little space for the forward to find as he gained momentum bursting forward, but what looked an impossible avenue to goal became a reality as his electric acceleration carried him between Jorge Otero and Xabier Eskurza.

An adjustment of the body opened up the angle whilst still on the run, before sealing the win with a side-footed finish into the far corner of Zubizarreta’s goal.

Ronaldo had rescued Barcelona in one of the great individual performances of an unforgettable career, his treble part of 34 league goals he scored on his way to the Pichichi trophy.

His nearest challenger – Real Betis’ Alfonso – was some nine goals adrift of the league’s leading scorer, a visible representation of the level above Ronaldo proved during his sole season with La Blaugrana.

A world-record move to Inter Milan followed before the injuries and redemption story that makes the tale of Ronaldo Nazario one football fans across the world are eager to relive.

The rapid rise and mix of magic and misfortune make Ronaldo’s career an enchanting one, with his brilliance at Barcelona perhaps the period when anything appeared possible.