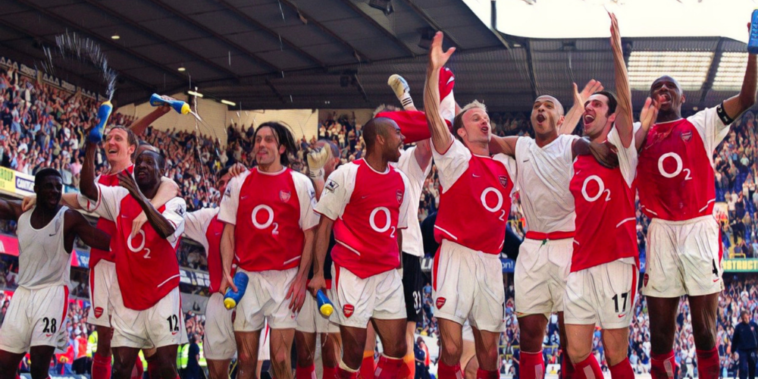 Arsenal travel the short distance to face Tottenham in the North London derby this week, a huge clash as the two capital rivals go head-to-head for Champions League qualification.

Mikel Arteta’s side can secure a top four finish with a win, a result which will also end the Champions League hopes of Spurs in the process.

Arsenal have past history of securing crucial results at the home of their fierce rivals, including a 2-2 draw during the 2003/04 season that secured the Premier League title.

The Gunners also won the title at White Hart Lane in 1971, before repeating the feat 33 years later on the club’s way to a historic unbeaten title triumph.

Ahead of Thursday’s North London derby showdown we remember the Arsenal XI who won the title at White Hart Lane in 2003/04.

Jens Lehmann arrived at Arsenal the previous summer with the unenviable task of replacing club great David Seaman, the former England number one having won three league titles and four FA Cups among his honours during an illustrious career in North London.

Lehmann made an instant impact after arriving from Borussia Dortmund however, making 54 appearances in all competitions and playing a crucial role in the club’s Premier League success.

Borussia Dortmund ➡️ @Arsenal#OnThisDay in 2003, Jens Lehmann became a Gunner and, not long after, a #PL Invincible… pic.twitter.com/hPTHlGXvIY

The German conceded just 26 goals in 38 matches across the course of the campaign and spent five seasons with Arsenal, racking up 199 appearances in all competitions.

He also holds the record for the most consecutive Champions League clean sheets, failing to concede a goal in eight successive games during the Gunners’ run to the 2006 final.

An unsung component of the club’s ‘Invincibles’ side, the Cameroonian was converted from a winger into a full-back and replaced Lee Dixon as first-choice in North London.

Lauren scored a crucial winning penalty against Spurs at Highbury during the Gunners’ run-in towards the Premier League title in 2001/02, before playing an integral role in their unbeaten triumph two seasons later.

He made 242 appearances across his six seasons and was named in the PFA Team of the Year following Arsenal’s 2003/04 title win.

One man guaranteed a less-than-warm welcome at White Hart Lane was Sol Campbell. The centre-back came through the ranks at Spurs, before making a controversial cross-capital switch to Arsenal in 2001.

Campbell’s free transfer move to Arsenal remains one of the most notorious deals in Premier League history, though it was a move that proved vindicated as the England defender won two Premier League titles and three FA Cups at Highbury.

One of the best centre-backs of the Premier League era, he became the youngest player since Bobby Moore to captain England and an iconic figure at Arsenal across his 197 appearances for the Gunners.

One of the shrewdest signings of Arsene Wenger’s reign at Arsenal, Kolo Toure signed from Ivorian outfit ASEC Mimosas for a fee of just £150,000 in February 2002.

After impressing with his infectious enthusiasm during a trial, the midfielder-turned-defender signed for the Gunners and in 2003/04 enjoyed a real breakthrough campaign at centre-back.

Toure’s move to central defence saw him form a fine understanding with Sol Campbell, a mixture of elite athleticism and defensive nous that formed the backbone of Arsenal’s title success.

He made 326 appearances for Arsenal before moving on to spells with Manchester City and Liverpool, securing a second Premier League title with the former in 2012.

Ashley Cole rose through the ranks at Arsenal to become a key figure in their successes of the early 2000s, the academy product winning two league titles and three FA Cups with the Gunners.

His tenacious defending and threat going forward saw Cole become one of world football’s best left-backs and arguably the finest of the Premier League era.

Despite the success of his time with Arsenal, his career with the club came to a sour end with a move to Chelsea in 2006.

Cole won eight major honours at Chelsea, including the Champions League and a second domestic double, becoming one of just two players – alongside Nicolas Anelka –  to have achieved the feat with two different clubs. His seven FA Cup winners’ medals are also an English record.

Ray Parlour’s final season with Arsenal ended in an unbeaten Premier League campaign, with the experienced midfielder replacing Freddie Ljungberg in the side for the 2-2 draw at Tottenham.

Parlour broke into the Arsenal side during the early nineties and amassed 466 appearances across more than a decade as a regular, winning two domestic doubles in addition to the club’s 2003/04 title success.

A popular figure affectionately nicknamed the ‘Romford Pele’, his relentless running and will-to-win made him a popular figure on the terraces in career that saw Parlour become one of the Gunners’ most decorated players.

The driving force of Arsenal’s title-winning team, Patrick Vieira assumed the club captaincy from the iconic Tony Adams in 2002 and led the side to another Premier League crown two seasons later.

Imposing, combative and with quality in possession, Vieira was an intimidating opponent for Premier League midfielders and among world football’s finest at the peak of his powers.

Vieira often stamped his authority on Premier League midfields and glided forward in that familiar long-legged stride, with the Frenchman opening the scoring inside three minutes of their title-clinching draw at White Hart Lane.

His final act in an Arsenal shirt was scoring the decisive penalty in the FA Cup final win over Manchester United in 2005, leaving for Juventus that summer as one of the division’s and Gunners’ all-time greats.

An unassuming but essential part of Arsenal’s 2003/04 championship-winning side, the Brazilian arrived in North London after helping Brazil to World Cup success in 2002.

Gilberto screened the backline with defensive discipline and tactical intelligence, providing the security for the Gunners attacking stars to flourish further forward.

The Brazilian brought balance and unleashed Vieira to power forward from the engine room, the midfielder an excellent servant across six seasons with Arsenal that brought 244 appearances.

Robert Pires overcame an arduous adaptation to the Premier League to become one of Arsenal’s finest ever footballers, overcoming his shaky start to be named as the FWA Footballer of the Year during the double-winning 2001/02 campaign.

Pires’ fleet-footed footwork worked in brilliant tandem with Thierry Henry and Ashley Cole down the left, a trio which tormented Premier League opponents at the height of Arsene Wenger’s aesthetically pleasing Arsenal side.

The Frenchman was an influential presence in the club’s ‘Invincibles’ campaign, scoring 14 goals and providing nine assists in the Premier League alone.

Pires reached 10+ goals in six straight seasons at Arsenal and was named sixth in a vote of the Gunners’ greatest ever players. He scored the second in the draw at White Hart Lane and scored more goals against Spurs than any other club, registering nine in 12 career appearances.

The best player in the Premier League at the peak of his powers, there was simply no stopping Thierry Henry.

In 2002/03 he claimed a PFA Player of the Year and FWA Footballer of the Year double after reaching 20+ goals and 20+ assists in the Premier League, before retaining both accolades following a 30-goal season in Arsenal’s historic 2003/04 title-winning season.

Often unplayable, he became synonymous with Arsene Wenger’s side and remains arguably the defining footballer of the Premier League era.

Dennis Bergkamp’s arrival at Arsenal was viewed as the catalyst for change, as free-flowing continental football replaced the more pragmatic regime of the George Graham and Bruce Rioch eras.

Bergkamp became one of the greatest players in the club’s history during a decade at Highbury, his finest football coming during the 1997/98 season as Arsenal secured a domestic double.

The numbers fail to do justice for a footballer exquisite in technique and talent, his partnership with Henry a potent combination of speed, subtly and scoring prowess.

Bergkamp was approaching the end during the 2003/04 season but continued to provide touches of genius to an iconic team, including providing the assist for Vieira’s opener at White Hart Lane.

Edu battled with compatriot Gilberto Silva for a place in the Arsenal side, but struggled to command an automatic role and made 51 of his 127 appearances for the club from the bench.

He was introduced for Ray Parlour on 67 minutes at White Hart Lane, securing his second Premier League winners’ medal at the home of the club’s North London rivals.

The Brazilian departed to sign for Valencia in 2005, but has since returned to Arsenal and works alongside manager Mikel Arteta as the Gunners’ inaugural technical director.

Jose Antonio Reyes’ career with Arsenal was one that burned brightly in its infancy before fading, with the Spanish star making a brilliant start to his career with the club after signing from Sevilla.

Reyes arrived mid-way through the 2003/04 title-winning season and scored twice on his third appearance to knock Chelsea out of the FA Cup.

The following campaign began in stunning style as Reyes scored in each of the opening six league fixtures of the season, as Arsenal set a new English top-flight record of 49 games unbeaten.

His form dipped, however, and he returned to Spain to sign on loan for Real Madrid in 2006/07, before spells at clubs including Atletico Madrid, Benfica and Sevilla before retirement.

Reyes sadly passed away after being involved in a car accident, aged just 35, in June 2019.