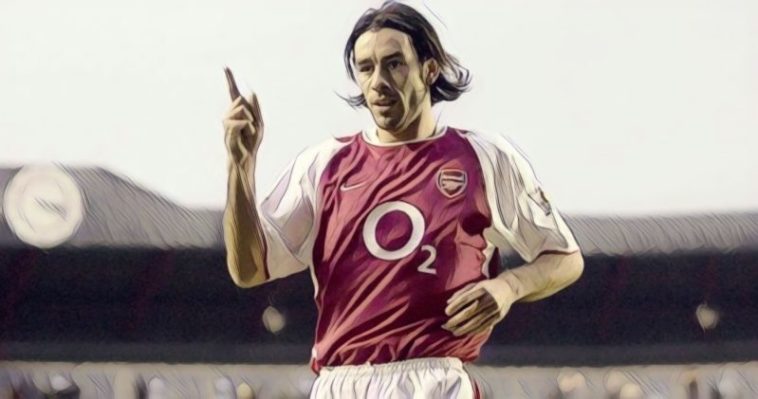 Premier League fans will all have their opinion on the division’s greatest ever sides, whether that be any of Manchester United’s succession of winning-machines under Sir Alex Ferguson, a formidable Chelsea during Jose Mourinho’s first spell or the more recent record-breaking achievements of Manchester City and Liverpool.

Each of those sides deserve their place amongst the Premier League‘s finest, but perhaps no team has captivated quite so brilliantly as peak-Arsenal under Arsene Wenger, a free-flowing and fluid footballing team whose precision passing laid the foundations for a glorious era in north London.

Wenger’s teams were sprinkled with a stardust plucked largely from his native France, amongst his finest captures the signing of the Gallic genius, Robert Pires.

Pires arrived in English football from Marseille shortly after the turn of the millennium and after an infamously slow start to his Premier League career, flourished into a key component of an iconic side and one of the shining lights of the division.

This is the story of one of the Premier League’s great Golazo Merchants:

Pires was born in the French city of Reims where he enjoyed a multi-cultural upbringing, often wearing the shirts of Real Madrid and Benfica during his younger years, an ode to his Spanish mother and Portuguese father, the latter having moved to France as an escape route from military service.

Football was the young Pires’ passion and he began his footballing journey in the academy system at Reims, working his way through the ranks despite being close to quitting the sport in his teens. His mother persuaded the youngster to continue pursuing his dream and he moved to FC Metz, where he made his professional debut as a teenager in 1993.

Pires swiftly became a regular in the side and his talent was immediately evident, becoming a regular goalscorer during the 1994/95 season before hitting double figures in three consecutive Ligue 1 campaigns.

The winger’s form earned him international recognition and he made his senior debut for France in 1996 after scoring five goals for the country’s U21 side, though despite interest he remained at Metz until the age of 25, his desire for guaranteed game time keeping him tied to the Ligue 1 side.

A move up the footballing pyramid became inevitable, however, and after helping France to success in the 1998 World Cup on home soil, Marseille came calling and he headed south to one of France’s grandest institutions.

Pires’ two-season spell with the club saw him endure mixed fortunes as Marseille narrowly missed out on both Ligue 1 and UEFA Cup success, before a problematic period – including reports of a boycott – brought an end to his time with the club.

By now Pires was growing in influence on the international stage and it was Arsenal who made a move to sign the winger, beating off competition from boyhood side Real Madrid and Juventus to secure his signing as the north London side sought a replacement for the departing Marc Overmars.

Pires arrived in a £6m deal and with a promising reputation following his exploits in France, though the summer signing endured a culture shock of epic proportions upon his arrival in the Premier League.

It took Pires – by his own admission – just 20 minutes for the realisation of what awaited him in England to sink in, the less than fashionable surroundings of Sunderland the setting for a brutal introduction to the Premier League as Arsenal crashed to an opening day defeat on Wearside.

Pires had watched the first hour from the substitutes’ bench before a forgettable cameo appearance, the Frenchman somewhat startled by the pace and physicality of the English game.

“By the 20th minute I was already thinking, what am I doing here? It was hard, very different to France, but in the end I got used to it. I wouldn’t say you’re scared but you can see that you have to change how you play – English football is physical, they kick you very hard.”

What had promised to be the next step on his upward trajectory to stardom threatened to turn into a nightmare spell across the channel, the fleet-footed winger struggling to adapt as he was subjected to combative challenges a world away from the lesser-demanding Ligue 1.

There were glimpses of his guile and class, including this goal against Blackburn in the FA Cup, but they proved few and far between in a debut campaign that saw the Gunners finish as runners-up for both the Premier League and FA Cup, with many an Arsenal supporter questioning Wenger’s wisdom and faith in his cultured compatriot.

This is a Robert Pires at @Arsenal appreciation tweet 🤩#GoaloftheDay @Deliveroo pic.twitter.com/rbv7URSoUY

Pires – despite his questionable facial hair and wiry frame – proved to be made of sterner stuff, however, and following a season of adaptation began to play his part in arguably the Premier League’s most aesthetically pleasing side.

That second campaign saw Pires star to be named as the FWA Footballer of the Year and Arsenal’s Player of the Season as the north London side completed a domestic double, the winger finishing as the Premier League’s leading assist provider despite suffering a torn cruciate ligament in March.

His season was awash with moments of magic as he sparkled in swashbuckling style down Arsenal’s left-flank, forming a telepathic understanding with compatriot Thierry Henry as he drifted inside in trademark shuffling style.

Pires was the prototype for the inverted winger which has become the norm in the modern game, cutting and drifting inside to weave his way through defences like a hot knife through butter. The highlight of his season was this audacious double lob against Aston Villa, embarrassing George Boateng with one flick before executing a chip of perfection over the hulking presence of Peter Schmeichel.

You get the impression that Schmeichel – widely regarded as the greatest Premier League goalkeeper of all-time and a ferocious competitive spirit – may not have been best pleased by this impudent effort from Arsenal’s French fancy-dan.

Throwback to this ice cold Robert Pires lob against Aston Villa. The commentary makes it even better. pic.twitter.com/CHPnAHuuvb

Pires had arrived in English football but his progress was stalled by a lengthy absence on the sidelines, eventually recovering to return to first-team action in November of the following campaign.

Fears the injury may have long-lasting effects on a player quickly becoming a fans’ favourite were short-lived, however, Pires scoring 16 goals in all competitions including 14 in just 21 Premier League starts.

That haul included a superb hat-trick against Southampton in the penultimate game of the season, Pires and Jermaine Pennant becoming the first teammates to score a hat-trick in the same Premier League fixture during a 6-1 thrashing of the Saints at Highbury.

Pires’ third of the afternoon ranks highly amongst his greatest Gunners goals, a ridiculous effort which characterised the self-confidence oozing through Arsenal’s number seven, a goal wrapped beautifully in audacity and arrogance to claim the match ball in sensational style.

Arsenal had blown a significant lead to hand the title to Manchester United in a disappointing campaign for the champions, but solace was found in the form of a second successive FA Cup, Pires scoring the winner against Southampton at Cardiff’s Millennium Stadium.

The Frenchman’s return from injury had returned the silky touch of class to Wenger’s attacking unit and the club were primed for another tilt at the title in 2003/04, that aforementioned Premier League victory over Southampton beginning the greatest run of form in English football history.

It proved to be a season that will forever live in the memory of Premier League fans, Arsenal producing a style of football never before witnessed with their French connection leading the charge in attack.

The Cole-Pires-Henry inter-play down the Gunners’ left flank devastated opponent after opponent as the north London side racked up a huge unbeaten sequence, despite early season visits to top four rivals in Manchester United and Liverpool.

It was during that aforementioned visit to Merseyside that Pires produced a spectacular early season effort, Steve Finnan’s invitation for the winger to cut inside ending in punishing consequences as the star whipped a delicious effort into the top corner.

🎙 "It's a fabulous goal from Robert Pires! It was in from the moment he hit it!"

Arsenal’s momentum was growing with Pires and Henry at the heart of a stunning season, the duo dovetailing like few partnerships the league has witnessed, interchanging positions and dragging defenders into unchartered territory.

Henry’s scintillating speed was perfectly complemented by the class and craft of Pires, the latter’s floating free-role a nightmarish proposition for opposition sides.

By early April, Wenger’s formidable outfit were still unbeaten and quickly closing in on a legendary unbeaten season, where the visit of Leeds would see Arsenal treat their supporters to champagne football at Highbury.

The visitors were blown away in an exhilarating display from the Gunners, Henry scoring four times in a 5-0 thrashing of the struggling side. It was Pires who scored the opener, however, with a goal that was Arsenal at their free-flowing best.

Without breaking stride, Pires bends a trademark curling effort into the far corner, capping a move which symbolised the swagger and style of Arsene Wenger’s all-conquering Arsenal.

Pires scored the following week during a 2-2 draw at north London rivals Tottenham – an opponent he regularly saved his best displays for to further cement his legendary status – to seal the Premier League title, Arsenal’s ‘Invincibles’ forever immortalised following a staggering achievement of class and consistency.

He spent a further two seasons with the club and added another FA Cup to his collection in addition to reaching the Champions League final in 2006, but the highlight of his six-year spell was undoubtedly the free-flowing football of that unbeaten season, Pires the architect of Arsene’s Arsenal, a player dripping in technique and natural ability.

There has been no end to the foreign imports which have lit up the Premier League since its inception in the early nineties, but few played in the magnificent manner of Pires, a winger who played in a style ahead of his time.

Nonchalant, impudent and often breathtakingly brilliant, the sight of a smirking Pires wheeling away in trademark finger-wagging celebration is amongst the most iconic in Arsenal’s modern history.

Undoubtedly one of the finest players in the history of London’s most successful side and a player deserving of his place amongst the Premier League’s greatest Golazo Merchants.