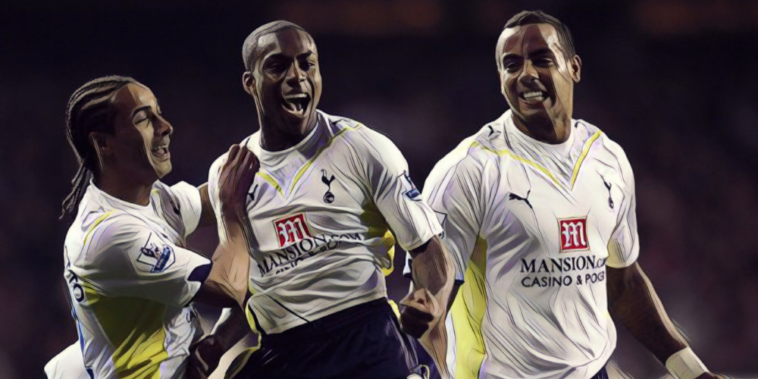 The two teams have enjoyed some classic encounters throughout the Premier League era, with clashes between the capital rivals often littered with goals, incidents and gripping drama.

Arsenal head into Thursday’s showdown knowing a win will secure a top four finish, whilst it’s a must-win clash for Spurs in their own pursuit of a place among Europe’s elite next season.

Ahead of their North London derby meeting, we’ve looked back at five of the best goals from Premier League clashes between Arsenal and Tottenham.

Arsenal’s leading light throughout his time in North London and regular scourge to their fiercest rivals, Thierry Henry was the best player in the division during his time in the Premier League.

Henry often appeared a level or two above his opponents, resembling the oldest kid in the playground galloping beyond younger years to score another goal in predictably routine fashion.

Henry – who became Arsenal’s greatest ever goalscorer and a record four-time winner of the Premier League’s Golden Boot – saved one of his finest individual moments for a clash against Spurs in November 2002.

Arsene Wenger’s side were the reigning champions and dismantled their rivals 3-0 at Highbury, with Henry’s goal living long in the memory following a sensational solo effort.

Picking up the ball well inside the Arsenal half, the former France international held off the challenge of Matthew Etherington before bursting forward into opposition territory and leaving a trail of Spurs defenders in his wake.

As the Spurs defence continued to back off, Henry sidestepped a feeble challenge from Stephen Carr, before taking another touch to steady himself and fire low past Kasey Keller.

Having travelled almost the length of the pitch to score, Henry proceeded to set off on a pitch-length sprint in celebration, finished with his customary knee slide

Emmanuel Adebayor is one of the few players to have adorned the colours of both clubs in the Premier League era, having made his name in English football at Arsenal before an acrimonious departure.

The Togolese forward is now a much-disliked figure amongst Gooners, but produced his fair share of memorable moments for Arsenal including this stunning strike at Spurs.

In the midst of a brilliant individual season that saw him finish as runner-up for the division’s Golden Boot, Adebayor scored a sensational volleyed effort as part of a brace in a 3-1 win at White Hart Lane.

Cesc Fabregas fizzed a pass into the feet of the Togolese target-man, who flicked the ball up with his first touch before swivelling and unleashing a thunderous volley beyond Paul Robinson.

After spells at Manchester City and Real Madrid he signed for Tottenham in 2011, with the forward the second-highest scoring player in Premier League North London derbies after netting for both sides in the fixture.

The second player on this list to have featured on both sides of the derby divide, David Bentley came through the academy system at Arsenal before leaving for Blackburn in search of regular opportunities.

His performances for Blackburn earned the winger international honours with England and a £15m move to Tottenham, with his first league goal for the club coming in spectacular fashion against Arsenal at the Emirates.

Bentley opened the scoring with an audacious effort from all of 40 yards, cushioning Jermaine Jenas’ set into the air before launching a swerving long-range effort over the back-peddling Manuel Almunia.

It was a moment of genius from Bentley in one of the most memorable North London derby fixtures of the Premier League era, the two sides exchanging eight goals as Aaron Lennon’s stoppage-time leveller snatched a late point for Spurs.

Has there ever been a better debut goal in Premier League history?

Danny Rose was handed his first appearance in the division in the hostility of a North London derby at White Hart Lane, but the teenager wasted little time in introducing himself to the Spurs support with this outrageous effort to open the scoring.

Manuel Almunia must have thought he had cleared the danger after getting a solid punch on an in-swinging corner kick, only for the ball to drop invitingly to the 19-year-old Rose some 30 yards from goal.

Rather than bring the ball under control, the youngster showed the confidence to hit a thunderous first-time volley that flew into the top corner for one of the goals of the season.

Rose has scored just nine Premier League goals in his career and none have been better.

Harry Kane has scored more goals in North London derby fixtures than any other player, with the forward having scored 11 times during clashes against Arsenal.

Kane has been one of the Premier League’s leading lights since emerging from the Tottenham academy ranks, winning three Golden Boots and rising to seventh amongst the division’s all-time leading scorers.

The England captain believes this stunning strike against the Gunners was the best of the lot, however, a brilliant bending effort to score the winner as Spurs secured a 2-1 win at an atmospheric White Hart Lane in March 2016.

“We had just scored the equaliser,” Kane told the Premier League’s official website.

“The crowd were on their feet. The atmosphere was electric.

“To score that was unbelievable. One of my best goals technically and the moment was really special.”

Kane has now scored 11 goals in just 14 league fixtures against the Gunners, the forward moving past the North London derby record previously held jointly by Bobby Smith and Emmanuel Adebayor.