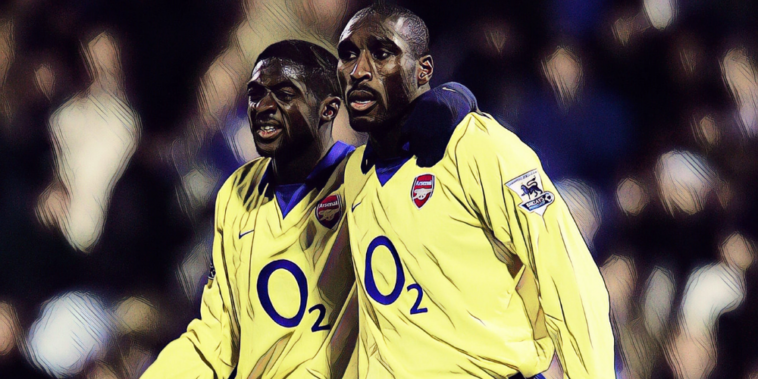 At the turn of the century the passing of the torch – from The Gunners old guard to the new – was eased by the timely emergence of an unlikely defensive duo. An electric partnership that turbo-charged Arsenal’s new look defence, breaking records and hearts on their path to immortality.

In the wake of a third successive runner-up finish to perennial title rivals Manchester United, the withered memories of The Gunners 1998 Premier League triumph came as scant consolation to Gooners.

During this period of stagnation, the bedrock of Arsene Wenger’s all-conquering side began to show signs of significant erosion. The rigid defensive partnerships that had underpinned an era of unprecedented prosperity at Highbury were slowly ebbing away.

With stalwart Steve Bould departed, and Martin Keown and Tony Adams in the twilight of their careers, Wenger and club visionary David Dein began the daunting task of replacing three club legends.

A powerful, uncompromising and vocal leader – Tottenham Hotspur’s Sol Campbell met their criteria. The England international, one of the most dominant central defenders of his generation, exhibited the same qualities George Graham had instilled in Arsenal’s old guard.

In the summer of 2001, Campbell shocked the football world by controversially crossing the great North London divide. Joining The Gunners on a Bosman transfer, he credited the ballsy decision to the persuasive proposals of vice-chairman Dein and his compelling ambition to play “at the top level.”

Over the course of the following season, Campbell (or ‘Judas’ as irate Lilywhites fans dubbed him) emerged as Arsenal’s new defensive linchpin. With veteran captain Adams playing a bit part role, The Gunners’ marquee signing forged a formidable partnership with the sagacious Keown.

Arsenal clinched a league and FA Cup double that season, crowning their outstanding campaign by securing the Premier League title at Old Trafford. The steadfast Gunners were unbeaten away from home all season.

As it transpired, that remarkable achievement merely foreshadowed a monumental record to come.

Constrained by the spiralling costs of their new stadium project, Arsenal did little business in the transfer market that summer. Subsequently, The Gunners failed to defend their league title in 2002/03, with Wenger’s men catastrophically throwing away an eight-point lead and finishing second to Manchester United.

Having conducted a post mortem, Wenger concluded that his side needed a consistent partner for Campbell. Adams had retired. Keown’s career was winding down. The error-prone Pascal Cygan, Oleh Luzhny and Igors Stepanovs simply couldn’t be trusted.

Hindered by a lack of finances, Wenger was forced to look internally for a solution.

Ivorian international Kolo Touré had become an important squad player for Wenger since arriving from ASEC Mimosas for £150,000 in 2002. A likeable but impetuous character, his boundless energy and comfort on the ball hinted at a long future at the heart of The Gunners’ midfield.

However, Wenger had other plans.

In the summer of 2003, under the guidance of Arsenal’s elder statesmen (particularly Keown), Touré was moulded into a central defender. Impressed with the huge strides he had made, Keown declared that the Ivorian possessed “all the tools to be a top player.”

Campbell was commanding in the air and an excellent reader of the game, but his technique was found wanting at times. By contrast, Touré was an accomplished dribbler who required a calming influence to keep him grounded.

As their understanding grew, so did Touré’s confidence. He began to bring the ball out of defence – adding an extra jolt of urgency into Arsenal’s already electric approach play. As the season unfolded, Touré carried the ball with increasing regularity – safe in the knowledge that his positionally sound mentor would be ready to sweep up, should his marauding runs go awry.

Arsenal cantered to the title that season without a single defeat, conceding just 26 goals en route to the title (including 15 clean sheets). During their unbeaten season, a first in England’s top flight since Preston North End in 1888/89, Campbell and Touré featured in all but three of the club’s league fixtures.

The Gunners unbeaten run continued into the 2004/05 season. They extended the record to 49 consecutive matches without defeat, before a 2-0 loss at Old Trafford in October – a match the media dubbed “The Battle of the Buffet” – put an end to their historic string of results.

Wenger’s men finished as runners up to José Mourinho’s emerging Chelsea side that season – the Gunners fifth 2nd place finish in seven years. A penalty shoot-out victory over United in the FA Cup final (a competition first) provided a modicum of consolation but, incredibly, the triumph would prove to be the Londoners last taste of silverware for nine years.

Despite finishing a disappointing fourth in the league the following season, The Gunners defied the odds to reach the 2006 Champions League final – a feat made all the more impressive by Campbell’s absence.

The Englishman had suffered a loss in form that season, making a number of individual mistakes, before taking some personal time away from the sport. In his absence, 21-year-old Swiss centre-back Philippe Senderos deputised.

Alongside the ever-present Touré, the two formed a makeshift partnership. Despite their tender years, The Gunners went on a 12-game unbeaten European run that saw them go 995 minutes without conceding a goal and record ten consecutive clean sheets (a Champions League record).

A Touré goal in the first leg – the last European night at Highbury – put Arsenal in the driving seat. In the second leg, after an injury to Senderos, Campbell returned to play in the 0-0 draw that saw The Gunners progress to the final.

The final against Barcelona at the Stade de France turned sour after just 18 minutes, with Lehmann sent off for bringing down Samuel Eto’o. Arsenal appeared doomed but, just after the half hour mark, the resurgent Campbell gave Gooners hope.

Powering home a thunderous header from a Thierry Henry delivery, Campbell emphatically put the ten men of Arsenal ahead. The Gunners fought valiantly, but couldn’t withstand the Catalan onslaught, as Frank Rijkaard’s side broke Arsenal hearts late on.

The moment Barcelona turned it around in the 2006 Champions League final 🥳pic.twitter.com/jcQOmWxz7g

A case of so near, yet so very far, the occasion not only marked the end of Touré and Campbell’s prosperous relationship, but prompted an exodus of players from the club.

Touré remained at the club for another three seasons, establishing himself as one of the finest defenders in the division. However, after a training ground bust up with William Gallas, the Ivorian left to join Roberto Mancini’s Manchester City revolution in the summer of 2009.

During Campbell and Touré’s three seasons together the pair cemented their reputations as one of the most influential defensive pairings in Premier League history. The dynamic duo preserved Arsenal’s dogged ethos, whilst ushering in a new period of success at the club.