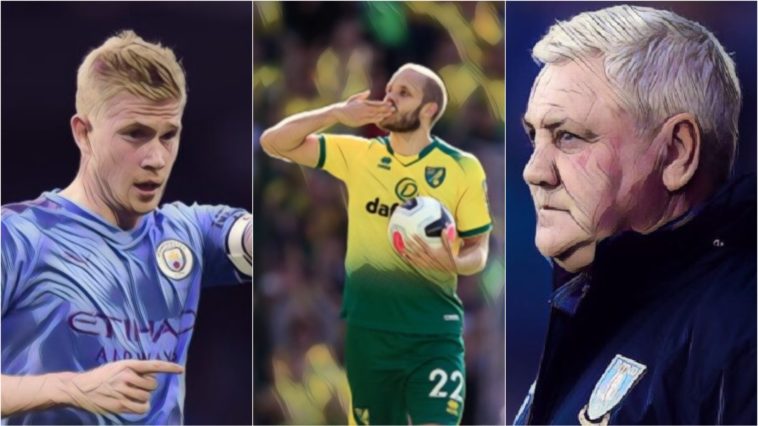 It has to be Sheffield United’s first home win of the season, their first in the Premier League since 2007, when they were relegated at the first time of asking.

Now it looks as if they are going to eschew all of the opinions that stated they would struggle this season and give it a right good rattle (full disclosure: our writers predicted that Chris Wilder’s charges would finish dead last).

The Blades are already one of the more interesting teams to watch and talk about with their style of play and innovative use of overlapping centre-backs, and have racked up four points straight out of the gate.

Bit harsh not to give it to a player who scored a hat-trick at the weekend, but Teemu Pukki loses out to the ever brilliant Kevin De Bruyne, whose excellence with the ball feels so nonchalant.

The Belgian midfielder provided a wonderful cross for Raheem Sterling to head home Manchester City’s first goal against Spurs, before hitting a low drive across the box for Sergio Aguero to slot home. Aside from the assists though, he effortlessly ran the show, dissecting Spurs from every possible angle.

De Bruyne made nine key passes on Saturday evening, more than any other player in the Premier League this weekend, while he also had an 1.03 expected assists (xA), again more than anyone in the league. With the game ending 2-2, it’s a shame no one was able to convert the chances he created for his teammates.

Well, in a manner of speaking…

A hat-trick in his first home game in the Premier League, four goals in the opening two weeks of the season, and a cracker of a volley that will surely be in the running for goal of the month.

It’s been a good week for Finnish forward Teemu Pukki, who has translated his terrific Championship form with Norwich City into the big time. His shot on the volley against Newcastle United was sublime and will be remembered at Carrow Road for a long time to come.

Now that the former Schalke striker has as many English top-flight hat-tricks as Cristiano Ronaldo and Dennis Bergkamp, the Teemu Pukki song is required listening for you all:

Few players in the league combine their defensive duties and attacking qualities as well as Lucas Digne, who provided four goals and four assists last season, winning the club’s player of the year award in the process.

The former Barcelona man was at it again at the weekend during Everton’s clash with Watford. The Frenchman was under pressure to get rid of the ball, but instead of simply booting the ball into the heavens, he smartly struck it into space down the left channel for Bernard to latch onto, before the Brazilian dispatched the winning goal of the game.

Digne’s afternoon was somewhat spoiled by an injury that forced him off the field, but Marco Silva revealed that the substitution was a precautionary measure and it looks as if he will be okay for Friday night’s game against Aston Villa. The left-back’s spirits were surely picked up by the fact he made our team of the week though.

“Sometimes he is too good for his own good.”

For the second week running, Gabriel Jesus had a goal disallowed thanks to the video assistant referee. And for the second time in the space of a few months, Spurs were saved by VAR in the final moments of a match with Manchester City at the Etihad.

The Sky Blues looked to have won the tie when the Brazilian striker scored in the penalty area with a terrific strike, causing some of the Tottenham players to fall to their knees in despair. If there was a reason to chalk the fifth goal of the game off, they certainly didn’t realise it.

The eagle-eyed VAR did, however, spotting the ball touching off of Aymeric Laporte’s forearm just before Jesus scored. Nobody noticed it happen in real-time and it’s probably fair to say the player himself may not have noticed it happening.

The goal was ruled out due to the new rule that has been implemented this season, which says that any handball, whether deliberate or accidental, in the creation or scoring of a goal means will result in a foul.

While it makes sense to take away judgement calls in relation to handball in these instances, it seems wildly harsh to punish a team for something so inconsequential.

We talked about the new handball rule and more in our interview with former referee Keith Hackett just before the new season got underway.

‘It should be debated’ – De Bruyne slams new handball rule

This man missed out on the award last week, but only because Jack Grealish did enough to deserve an entire month’s worth of ridicule in one day. But on this occasion Steve Bruce gets the recognition he deserves for the job he’s doing at Newcastle United.

Last Sunday against Arsenal the former Aston Villa and Sunderland manager admitted he sent Jetro Willems into midfield after replacing Jonjo Shelvey, where the new signing proceeded to run around like a headless chicken for several minutes. Turns out the manager put him in the wrong position — he’s a left back.

This past Saturday there wasn’t one particular thing you could point at and say “what a donkey”. And if there was, there might be more hope for the Magpies, because that would suggest that if they could fix that problem they would be right as rain. But they were a mess all over the park and there’s no easy solution to the malaise that has descended upon St James’ Park.

They deserved to lose heavily against a newly promoted side, and that says enough.

See Also: The stat that shows Spurs have always been more resilient than you think