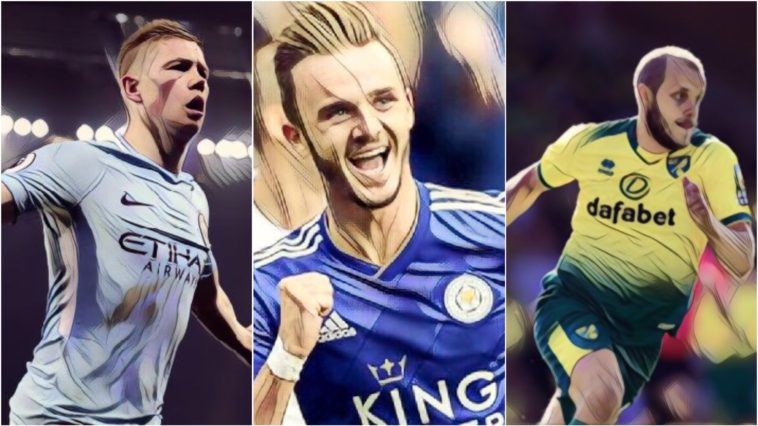 VAR was the subject of much debate once again this weekend, with Gabriel Jesus seeing a late winner ruled out as champions Manchester City and Tottenham drew 2-2 at the Etihad.

Liverpool and Arsenal both maintained their 100% starts to the new season, whilst newly-promoted duo Norwich and Sheffield United registered their first wins of the new campaign.

Here, in a 3-5-2 formation, is The Football Faithful’s Premier League Team of the Week for gameweek two:

In a weekend where clean sheets were a rarity, few goalkeepers were as busy as Tottenham’s Hugo Lloris, who made eight saves as Mauricio Pochettino’s side claimed a point a Manchester City.

Despite being dominated for large periods, Spurs returned home with a 2-2 draw and Lloris played a major part. The Frenchman making one particularly impressive stop from a deflected Oleksandr Zinchenko effort.

Leicester’s failure to sign a replacement for Harry Maguire had left fans concerned, yett Turkish international Soyuncu has showed Foxes supporters there is life after the world’s most expensive defender.

Fast becoming a cult hero, the 23-year-old’s committed displays have won admirers and he stood out in Leicester’s 1-1 draw with Chelsea on Sunday.

Not afraid of a physical battle, Soyuncu dealt with the threat of Olivier Giroud and Tammy Abraham as Brendan Rodgers side secured a point at Stamford Bridge.

Chris Wilder’s side have made a solid start to life in the Premier League following promotion, a battling win over Crystal Palace making it four points from two top flight fixtures.

In a game low on quality a gritty defensive performance provided the platform to secure a 1-0 win, with O’Connell starring, making more clearances than any other player.

United’s unorthodox defensive style has raised concerns over their ability to survive in the Premier League, but having kept the equal best defensive record in the Championship last season, Wilder is confident they can continue to be successful amongst England’s elite.

The French full-back is quietly establishing himself as one of the Premier League’s best left-backs, in an Everton defence which continues to show solidity.

Marco Silva’s side have built on a strong showing to the end of last season with back-to-back clean sheets so far, whilst Digne showed his attacking threat with a fine pass from deep to set up Bernard’s winner at Goodison Park.

Read: Who is the best left-back in Premier League history?

Arsenal’s loan signing of the Real Madrid midfielder could prove one of the shrewdest acquisitions of the summer transfer window, the Spain international demonstrating his class during Unai Emery’s side’s 2-1 win over Burnley.

The 23-year-old made the Arsenal midfield tick, Ceballos helping himself to two assists on his first start for the club in a promising performance.

The Belgian midfielder voiced his frustration at VAR and City’s late, disallowed goal, but the controversy should not distract from a fine performance from the 28-year-old.

De Bruyne has now registered 10 assists in his past 10 games after providing both goals in the 2-2 draw with Tottenham, the first a sublime cross for Raheem Sterling to head home.

Few can live with De Bruyne on this kind of form, the likes of Sterling and Sergio Aguero must be thankful they receive such high quality service on a regular basis.

Read: Why Spurs got it so wrong tactically against Man City

Maddison is given a licence to pick up pockets of space in Brendan Rodgers fluid attacking formation, and the 22-year-old was at his attacking best in Leicester’s 1-1 draw at Chelsea on Sunday.

No player in Europe created more chances than the playmaker last season, Maddison’s creativity likely to be central to Leicester’s chances of a successful season once again.

Called up to the England squad last season, Maddison is ready to make his senior international debut now and could help solve Gareth Southgate’s creative void in midfield.

The local youngster impressed as Norwich registered their first win since promotion from the Championship last term, the 21-year-old providing two assists in an energetic display on the right flank.

Daniel Farke’s side are an exciting blend of domestic talent and shrewd signings from abroad, and have shown enough in their opening two fixtures to ease concerns over their lack of summer spending.

Having featured as a substitute in Liverpool‘s opening win over Norwich, Mane hit a Uefa Super Cup double in midweek and was the star again this weekend as Jurgen Klopp’s side made it two wins from two at Southampton.

The Senegal international is vital to Liverpool’s fluid front line, his pace, creativity and tenacity in pressing setting the tone for the European champions.

Mane opened the scoring at St Mary’s with a stunning effort from distance before stealing possession to lay on Roberto Firmino’s second in a hard fought 2-1 win.

Last season’s joint Golden Boot winner is likely to be vital to Arsenal‘s hopes of securing a top four finish, the Gabon international providing another reminder of his quality with a fine run and finish to seal a 2-1 win over Burnley.

Signed on a free transfer last summer, the Finland international fired Norwich to promotion last term and has adapted seamlessly to life in the top flight.

The 29-year-old hit a superb hat-trick against Newcastle United as Daniel Farke’s side registered their first win since their return to the top flight.

His first was a sumptuous volley, whilst his evasive movement and calm finishing saw him claim the match ball and make it four goals in two Premier League fixtures.

See Also: Top five ‘where were you?’ moments in Premier League history