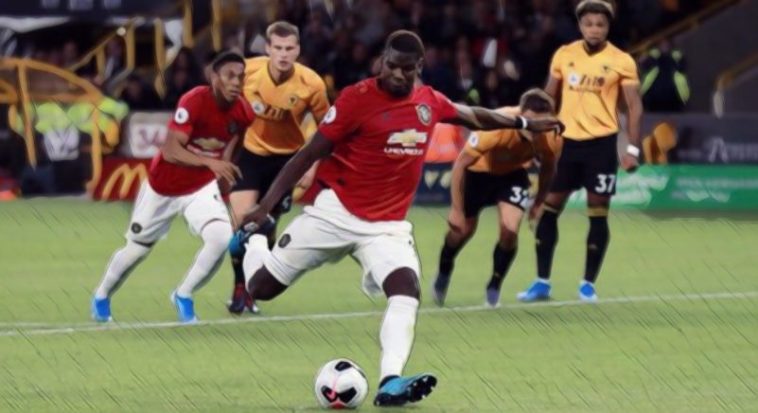 Nuno Espirito Santo’s Wolves side continued their excellent recent record against Manchester United, after the sides played out an entertaining 1-1 draw tonight at Molineux.

Manchester United dominated the first-half and deservedly took the lead when Anthony Martial smashed home with his left peg after being played through by Marcus Rashford in the 27th minute.

Wolves would emerge a different side after the break though and equalised 10 minutes into the second half via a sublime Ruben Neves strike from the edge of the area.

United would have the chance to win the game when Paul Pogba was taken down in the area by Wolves skipper Conor Coady, but the Frenchman’s powerful spot-kick was well saved by Portuguese ‘keeper Rui Patricio.

Could do nothing about the first Manchester United goal and saved Pogba’s penalty well.

The United goal came from his side and made no impact going forward before being replaced at half-time due to illness.

Made a few key interceptions to deny Lingard and Pogba chances and perhaps did just enough on two occasions to distract Martial and prevent him from scoring.

Made several good strong challenges, got round on the cover well and played some nice passes but gave away the penalty with a clumsy challenge on Pogba that could have cost his team the game.

Struggled to deal with Shaw and Rashfords pace in the first half but made some good blocks and was helped by the introduction of Traore in the second half.

Had a good battle with Dan James on Wolves’ left hand-side, struggling to deal with his pace at times but ultimately preventing him from creating many clear-cut chances for his teammates or himself. Was also a threat going forward but arguably should have done better with a back post header from Traore’s cross.

Struggled along with the rest of the Wolves team in the first half but made some good tackles and played some lovely, clever passes in the second half including the one-two with Diogo Jota from a corner before teeing up Neves for his wonder strike.

Struggled to establish himself in the game, giving a few fouls away but won the ball back well on a couple of occasions, before firing over from a tight angle after a quick Wolves breakaway late on in the match.

Was virtually non-existent in the first half but produced another worldie in the second to draw his side level. The Portuguese just managed to get the ball out of his feet and set it after Moutinho’s pass from a short corner before curling it expertly over David De Gea’s outstretched arm and into the Spaniards top left corner, clipping the underside of the bar on its way in.

Was largely contained by the impressive Wan-Bissaka on Wolves’ left but worked tirelessly for his side and put in some dangerous crosses that were ultimately dealt with.

Went on a nice run in the first half evading two United players including Maguire and was desperately unlucky to hit the post with a glancing header early in the second period from a Moutinho free-kick.

Turned the game on its head after his introduction at half-time for Matt Doherty. Injected pace and directness into Wolves’ play, skipping past Shaw on several occasions and delivering dangerous crosses into the United box. If he can continue to match his power and pace with the delivery shown today he could finally fulfil his potential.

Had very little to do as Wolves only managed two shots on target, one being the goal which he was completely helpless for.

An extremely strong performance for the young English right-back. Contained the highly talented Jota well, again proving he is very hard to get past and linked up well with James going forward.

Made some good clearances from dangerous Wolves crosses and was strong in the tackle. Massively over hit a free kick in the first half and had a wild swing at the ball which then looped up into the air on the edge of the box but he managed to recover, heading it back to De Gea, on what was otherwise a very composed and assured night for the Swede.

Was equally at ease with his feet as he was with his head, playing some lovely passes whilst clearing the ball in dangerous areas with his aerial presence. If the back four that have started the first two Premier League games can stay fit, then Maguire could lead United to a top-four finish.

Did well in the first half especially going forward, playing a key role in the build up to Martial’s goal but struggled to cope with Adama Traore’s pace and power in the second period.

Was disciplined in his positioning as ever and neat and tidy on the ball but his performance wavered as the game wore on with the two Portuguese maestro’s in the middle of the park on the opposite team growing with influence.

Was sloppy with possession deep in his own half on more than one occasion but at the same time was instrumental in the Red Devils dominating the first half. Went on a powerful run before playing a clever one-two with Martial that led to the penalty which he then missed. Although his penalty was struck with power and confidence it was a nice height for Patricio and not far enough into the corner of the net.

Had a good connection with Wan-Bissaka, got to the byline with his blistering pace several times before delivering good crosses and tracked back to good effect on more than one occasion. A goal or assist was the only thing missing but a yellow card for diving was a serious blot on the youngster’s copybook.

Largely ineffective but had a hand to play in United’s goal and worked hard for his team. Snatched at a good chance presented to him by a Wan-Bissaka cut back after good play from the full-back and James down the right-hand side.

Harassed the Wolves backline well all game and didn’t drift in and out of the match as he so often does. Took his goal very well, smashing the ball into the roof of the net at the near post leaving Patricio no chance, but arguably should have scored from a delightful Rashford cross earlier in the first period.

Created the goal with a nice ball slipped down the channel for Martial (or maybe Shaw) and picked up good positions in the spaces between Wolves’ defence and midfield. Put Bennett on his backside with some lovely footwork and was unlucky not to have another assist.

Brought on to try an pick a hole in Wolves defence, although the Spaniard struggled to get into the game