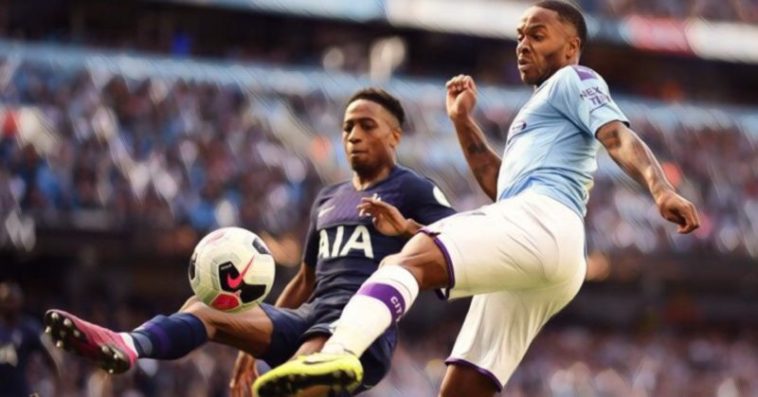 Drama. It’s the first word that comes to mind when reminiscing Tottenham’s sensational win over Man City in the Champions League last season.

There were elements of deja vu in this meeting between the two teams, in a clash that lacked the same quality yet had its own drama that made for an entertaining 2-2 draw that left Spurs relieved and Man City aggrieved.

In previous meetings with Tottenham, Pep Guardiola has been somewhat apprehensive in his approach. His first defeat in English football came at the hands of Mauricio Pochettino’s side, a testament to the vast tactical knowledge of Pochettino and the physical and technical excellence of his squad.

In the Champions League quarter-finals last season, Guardiola was curiously cautious against Spurs in the first leg, leading to a 1-0 defeat. On this occasion, such pragmatism was avoided and City played in their usual style and did so to great effect.

Guardiola set them out in their customary 4-1-4-1, allowing the fullbacks to invert, the midfielders to find pockets of space in between the lines, and the attacking players to interchange fluidly to perform the quick passing sequences that have become synonymous with City under the Spanish coach.

Pochettino has made Spurs an adaptable side, capable of playing in different ways based on personnel, opposition playstyle, and specific in-game situations. They’ve routinely impressed in the Premier League with an attractive, possession-based style of football, yet their wins against City and Ajax in the Champions League last season exemplified that they can be more direct, aggressive, and physical when needed.

However, for this fixture, the Argentine’s team selection, and Tottenham’s performance, didn’t necessarily fit with either approach. Some players such as Moussa Sissoko, Erik Lamela, and Tanguy Ndombele would suggest that Spurs were looking to make the contest more physical and direct, yet they lacked a pacy attacking player to hurt City on the counter-attack.

This meant that even if they were capable of winning the ball back, Spurs couldn’t translate this into attacking opportunities. Yet attempting to play an expansive style against Manchester City is incredibly difficult, as Pochettino knows from previous losses against Guardiola, such as their 4-1 defeat in 2017.

This left Spurs in a precarious position, and made them appear as to having no coherent game plan on the pitch. It manifested in just three shots, two shots on target, limited possession when the ball was recovered, and a failure to translate into consistent chance creation.

This tactical insecurity combined with City’s attacking prowess meant that Tottenham’s defense was under constant pressure. Except for a few periods, Spurs were content to not press and attempt to keep their shape. Yet City excels at playing against such defenses, in which their incisive movement and passing can create space with ease.

This was compounded by the fact that Spurs lacked a natural defensive midfielder, leaving gaps in between the lines for the skillful City players to exploit. City were most effective on the right-hand side, where Bernardo Silva and Kevin De Bruyne combined well to consistently create crossing opportunities.

On multiple occasions, Silva would receive the ball very wide and then drive inside, often drawing opposition players towards him and allowing De Bruyne to drift into the right half-space, where the Belgian’s superb delivery consistently caused problems for Spurs.

City’s ability to make use of their passing, movement, and generation of overloads out wide enabled them to consistently create chances. When combined with De Bruyne’s excellent delivery and the movement and finishing of Sterling and Aguero, City were able to score twice and could have easily scored more.

Yet in remarkable fashion, Spurs held on. An intelligent pass from Ndombele and a rare blunder from Ederson gave them their first goal. A deft header and lapse in concentration allowed Lucas Moura to equalize for Tottenham. Moura was an inspired substitution, but failed to make inroads into the game after scoring, speaking to Tottenham’s general inability to prevent City from attacking and generate opportunities for themselves.

Yet what they lacked in quality they made up for in mentality. Their players were throwing themselves at the ball, trying their utmost to cover all the available space and keep track of the various City runners on and off the ball. This defensive effort was led by a sensational performance from Hugo Lloris.

His 300th appearance was marked by a brave performance in which his saves and blocks were crucial to denying City and instilling a sense of hope in his backline that they could weather the storm. City will be perturbed that they weren’t more clinical, but credit has to be given to Pochettino and Spurs for the resilience they showed. The cliche is that Spurs crumble under pressure, but it couldn’t be further from the truth.

The obvious highlight of the game was the controversial VAR decision to rule out Gabriel Jesus’s stoppage-time winner after Aymeric Laporte’s handball was spotted in the buildup to the goal. The grievance with the specific incident seems to be more with the actual law as opposed to VAR, which is merely enforcing it.

Yet there were other problems with its usage, most notably in ignoring potential incidents where it could be reviewed. For example, when Lamela pushed Rodri in the box or when Oliver Skipp tugged on Aymeric Laporte before his handball.

Whether these incidents would constitute penalties is unknown, but it’s hard to argue that VAR shouldn’t have been consulted on them. It speaks to a lack of accountability in the way VAR is used, and warrants a true discussion about how to use it going forward.

Whether it should be used is a triviality – we have, and we have to deal with it. But the game did reveal genuine flaws in its usage that should be discussed and resolved throughout the course of the season.

In the context of the game, it may not have all that much bearing on the race for the title or the top four. The game showed that while Spurs reached the Champions League final and have brought in fresh faces in the summer, it will take some time before they can seriously challenge City.

Pochettino will have to integrate new players into his starting XI for the first time in a while, and this will no doubt pose initial difficulties to Tottenham’s performance and continuity. Yet given the caliber of their coach and players they purchased, there’s not too much to worry about for Spurs.

City at the Etihad is the most difficult game in the Premier League, and a somewhat fortunate draw is no shame. As for City, it’s unlikely this game will concern them all that much either. Scoring just twice after thirty shots and ten shots on target is an anomaly, especially with players of City’s quality.

They will no doubt continue to be a dominating force in the Premier League this season. While some may think that dropping any points could lose City the title given how well Liverpool played last season, the Reds seem to have significant defensive woes that don’t bode well for their title prospects this season.

Both recent performances and underlying statistics show that it’s unlikely that Liverpool will pose as formidable a threat to City’s title challenge last season. In a game of high drama but likely of little consequence, Spurs and City need not concern themselves too much over their team’s performances.

Read: Five of the best goals from the Halfway line