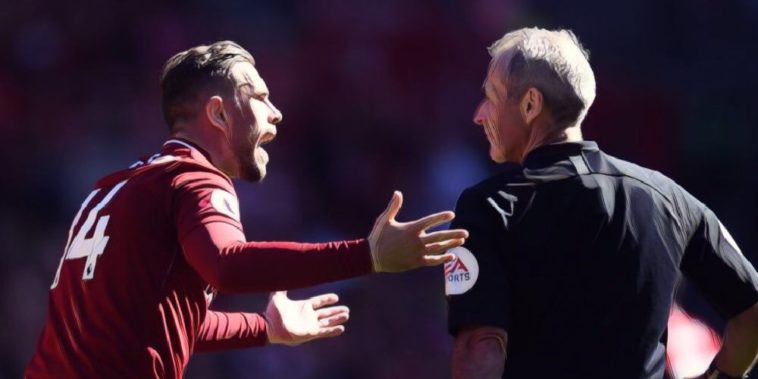 Former Premier League referee Keith Hackett thinks that football fans could be in for a lot of confusion this season following the new rules surrounding handball.

The imminent Premier League campaign will see a raft of new rules being introduced, with the handball rule one of a number to have seen an overhaul this summer.

Fernando Llorente’s goal for Spurs in their Champions League quarter-final against Man City was one example of a goal that may have been ruled out under the new rules, with goals now set to be disallowed if the ball touches the hand or arm of attacking players whether there was an intention to do so or not.

Speaking exclusively to The Football Faithful, former top-flight referee Keith Hackett tried to explain the new rules, but told us that we could be in for ‘a lot of debate and confusion’.

“I think the one [rule change] that is really going to cause a lot of debate and confusion is around the handball,” Hackett told The Football Faithful podcast.

“We saw it being introduced in the Women’s World Cup, and now we are seeing a degree of confusion being brought about by the head of the PGMOL, Mike Reilly, who is in disagreement with the law and how it’s written

“He’s actually advising his referees to take a lower level of sanction, if you like, be careful when handballs take place. He’s almost sticking, at the moment – and we’ll see a little bit more clearly as the season progresses – but he’s tending to stick to the old law.”

While situations involving attacking players could be pretty clear, Hackett predicted that handballs in defensive scenarios could result in more confusion, with a players’ silhouette now being taken into consideration, similar to the situation which saw Manchester United awarded a last-minute penalty against PSG last season

“That’s right! What they are saying very clearly is that a goal in particular for an attacking move is stopped when there is accidental handball, so they’ve now said that it doesn’t matter [about intent]. If it hits the hand or arm and the ball goes into the goal, the goal is going to be disallowed.

“I think that is clear in itself, but then we get into the confusing areas is if the ball hits the defender and goes into goal, we’re actually saying that’s a goal, and then we are getting into trying to clarify where the individual makes the body larger.

“Where the confusion will arise is around defending, and ‘ball-to-hand’. There’s a lot of latitude in a referee being able to determine if that player has made his body bigger or not. It’s that area of grey that comes into the actual law itself that will create a lack of uniformity and interpretation.”