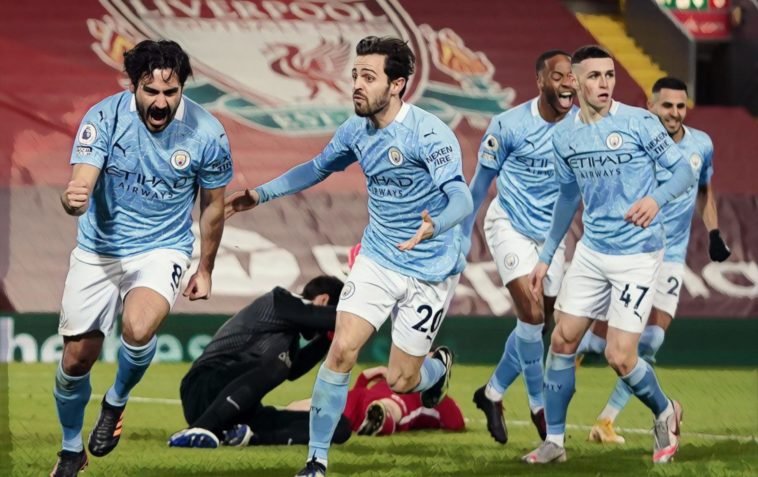 Manchester City’s emphatic 4-1 win over Liverpool in the Premier League on Sunday was what you might call your classic statement victory. But what made it so?

Beating the reigning champions, for one, is a key ingredient to any statement victory. But anyone can potentially beat the holders on their day with a bit of luck. What made this win particularly meaningful was the fact that it was Man City’s first win at Anfield since 2003.

Statement victories always denote a major mental shift which recalibrates our impression of the teams involved, elevating them from pretenders to conquerors.

It might seem silly to think City needed a win like this to force that change in mentality; they have, after all, won four league titles in the past decade, two of which have come under their current manager. But just a few months ago they were floundering in the bottom half of the table, missing their star striker and considered out of the running for top spot.

Man City have been building momentum since their last Premier League defeat, a 2-0 loss away to Spurs. Progress has been steady, looking stronger with every passing week, but this latest result confirmed them as the top dogs while relegating Liverpool back to their previous place in the pecking order.

The fact that it was such a comprehensive win, with City looking almost impervious while the Reds floundered, doesn’t hurt its status as a statement victory either.

Just compare City’s performance here with Man United’s in the same fixture this season. Liverpool were there for the taking but United didn’t stick the knife in, instead settling for a goalless draw. A good result by any measure, but a win would have had a major impact on their season and how we perceive them as title challengers.

Instead they are now in City’s wing mirror as their local rivals drive towards a third league triumph in four years. That is the power of the statement victory, a result that can be pointed to as a hugely important chapter in a team’s story.

Kevin Keegan’s ‘Entertainers’ were arguably the best team never to win the Premier League, and possibly the most enjoyable team to watch in English football history.

They went toe-to-toe with Alex Ferguson’s Manchester United in the 1995/96 campaign and came out the wrong side of it, despite having a twelve point lead in January.

The Magpies began the following season like a house on fire, winning seven of their opening nine matches ahead of their clash with the champions. They proceeded to humiliate the holders 5-0, the pick of the bunch Philippe Albert’s majestic lob over Peter Schmeichel. What made it most satisfying was that Alan Shearer, who turned down Ferguson that summer, starred for the hosts.

That put Newcastle three points ahead of Arsenal at the top of the table and five clear of Man United. It was a sensational moment that announced to everyone they were not going to let the previous season’s collapse derail.

Newcastle’s momentum was immediately halted, however, when they lost their very next match 2-0 to Leicester City. Their form completely inverted, winning just two of the next ten games.

They eventually finished second again, but under his successor Kenny Dalglish that phenomenal team was systematically dismantled. They finished outside the top ten and were never quite the same force.

The following season Manchester United were going for their third consecutive Premier League title. They were well on course after establishing a nine point lead with nine games to go.

Arsenal had three games in hand, however, and most crucially were facing the champions next. The Gunners hadn’t been beaten in ten games and a win at Old Trafford would completely switch momentum the other way.

In a tight affair Arsenal came out the better, beating United thanks to the quick legs and sure feet of Marc Overmars. Beating them at their own ground in such a massive encounter was like a seismic earthquake in footballing terms – and the away fans there that day knew it, bursting in rapturous celebration. It’s also the game that kickstarted the Premier League’s greatest rivalry.

The North London outfit would go on to win their next seven matches, the title clincher coming against Everton at Highbury where Tony Adams scored one of the all-time great title-winning goals in a 4-0 victory.

José Mourinho laid down a marker in his very first game in English football, beating Manchester United 1-0 on the opening day of the 2004/05 campaign.

The match itself was fairly uneventful, with Eidur Gudjohnsen’s solitary goal in the 15th minute deciding it in favour of Chelsea. It was a classic of the Mourinho genre that we would come to know very well over the following years; take the lead, control the game by not allowing any space in the defensive third, and close up shop without taking any risks.

It sounds simple when put like that, Ferguson had no answer for it at the time. Chelsea were like a boxer who knows they are well ahead on points and can keep their opponent at arm’s length; all they have to do is avoid a knockout blow.

That blow never came and United were unable to lay a glove on the Blues that season. The league was not won or lost on that day, but it sent out a signal to would-be challengers: if you want the title, you’ll have to come through us.

At this point we know what Manchester United fans are thinking: Why always us? Why is every match on this list up to now involving a defeat for our team?

Take it as a compliment, as for so long your team was the one to beat. Invariably during Ferguson’s reign it was his team that you had to go through if you wanted a shot at the title. As Ric Flair says, “to be the best you gotta beat the best.”

That’s precisely what Manchester City did in 2011 in the most emphatic fashion possible, beating their local rivals 6-1.

Up to this point Man City were still looking for legitimacy. They were splashing the cash like there was no tomorrow following the Abu Dhabi takeover in 2009, but they weren’t being taken entirely seriously as title challengers.

Alex Ferguson referred to them as the “noisy neighbours”, a sound bite that has lived on in infamy ever since. But City showed they weren’t just content to live side by side with United, but that they wanted to destroy their house altogether.

After 70 minutes City were 3-0 up. With nine minutes remaining Darren Fletcher got one back, so United threw numbers forward in a desperate attempt to get something out of the game. That left vast swathes of the pitch open for City, who obliterated them on the counter, scoring three goals in the final few moments.

The title race took many twists and turns that season, but it ended with Man City claiming their first Premier League crown thanks to a certain injury-time goal on the final day.

Even when Leicester City were joint-top of the Premier League at the midway point of the 2015/16 campaign, there was very little hope given to them of finishing in the top four let alone winning the division.

Having just avoided relegation the year before, it seemed fanciful to think they could even think of qualifying for the Champions League. But this was by no measure a normal season and when they faced Man City in February it was a top of the table clash.

With two league titles already in their back pocket by this stage, this should have been the moment for City to use their nous and experience to puncture the fairytale at a critical juncture. Instead they were down three goals by the hour mark at their own ground.

Sergio Aguero pulled one back late on but it was only a consolation, as a Robert Huth brace either side of a Riyad Mahrez goal down the home side.

The victory was so definitive that Leicester’s title credentials could no longer be ignored. It not only changed everyone’s perception of what they could achieve, but it instilled in them the belief that they could go all the way. And with just one defeat in their final 13 matches, that’s exactly what they did.