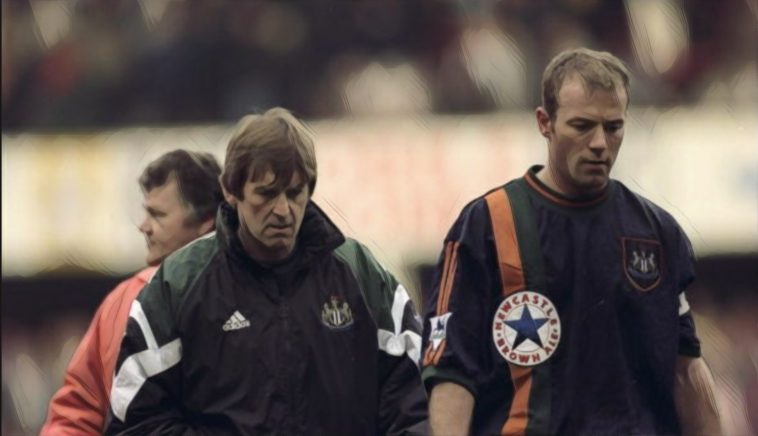 When putting together a series lauding the most cherished Premier League sides from the ‘90s it would be entirely remiss to overlook Kevin Keegan’s Newcastle United side. Yet that is precisely what we’re going to do here.

The reason is very simple in that King Kev’s swashbuckling side, who so memorably enlivened English football only to cruelly miss out on the glory they thoroughly deserved, has been celebrated far and wide ever since. We know everything there is to know about them. There is nothing new to say.

A change of tack is needed then, and what intrigues is a question that is rarely delved into whenever vintage teams are revered – what happened next?

For Newcastle their incredible era that saw them crowned as the nation’s entertainers began to unravel on 7th January 1997 when Keegan dramatically announced his resignation. It was a decision that seemingly came out of the blue with the Magpies sitting fairly pretty in fourth having recently blasted seven past Tottenham. The passing of time has since told us however that Keegan had twice tried to quit in the preceding months but was talked out of it. On this occasion there was no stopping him.

So news crews dutifully raced to St James’ Park to film hordes of fans crying in genuine shock at the bombshell. Considering what the man had achieved at Newcastle – taking them from the brink of the third tier to title contention in the space of five years with a team that quickened the pulse – it’s no exaggeration to suggest Tyneside was experiencing a form of grief.

In light of his sudden departure chairman Sir John Hall was now faced with the tricky task of bringing in a top class replacement. After an initial attempt to lure Bobby Robson from Barcelona failed he turned to Kenny Dalglish, an appointment that made sense given title-winning seasons at Liverpool and Blackburn Rovers respectively.

Dalglish clearly fulfilled his remit to better organize United and he did so quickly with draws being gained instead of the odd loss as players reined in their artistic licenses, working together as a unit rather than a collection of individuals. Newcastle eventually improved their league position and finished second in the table.

At this juncture it could be perceived that Newcastle had managed to minimize a potential crisis, only for that summer to bring a transfer window that is still talked about in the north-east to this very day. It’s a summer that has come to define the club, if not putting a full-stop on their dreams then certainly steering a course further away from them. Fourteen years on, with Steve Bruce at the helm, and Mike Ashley in the boardroom those dreams are now a tiny dot on the horizon.

The Newcastle Utd manager was on to explain why he wanted their away FA Cup tie with Stevenage played elsewhere.

As is common for any manager Dalglish felt the need to mould the team to his own liking and to that end a ferocious amount of transfer activity ensued with an astonishing 20 newcomers heading to St James’ Park across a nine-month period. 20! Included in that number were a trio of Premier League legends who, with a combined age of 105, had their best days in the rearview mirror and in due course Ian Rush, John Barnes and Stuart Pearce became known to the Toon faithful as Dalglish’s Dad’s Army.

There were also flops aplenty but in fairness to the new gaffer two players were signed that year who carried the club for seasons to come. Shay Given arrived in June for a bargain £1.5m and would go on to make 354 appearances. Gary Speed was then bought for £5.5m, re-uniting in midfield with David Batty from their Leeds days, swiftly gaining the respect and love of the Gallowgate.

Yet if the slew of underwhelming additions – Given and Speed aside of course – devalued Newcastle’s squad that was nothing compared to the club’s out-tray in terms of damage done. Peter Beardsley was sold to Bolton. David Ginola headed to Spurs. Lee Clark made a contentious switch to local rivals Sunderland. That January Faustino Asprilla moved to Serie A and six months earlier Newcastle made the ludicrous decision to flog Les Ferdinand to Tottenham for £6m. Dalglish, according to fan lore that has since been handed down to the next generation, willingly sold the club’s crown jewels.

The latter sale confounded then and still confounds now. The previous season Ferdinand and Shearer had been a devastating duo, scoring 41 goals between them in the league alone and with the relationship flourishing there simply was no logic in breaking it up.

In the intervening years accounts vary as to who exactly made the call. Dalglish for his part insists that the striker was desperately missing London and has alluded too that Newcastle’s finances were not in the best of shapes. Local journalist John Gibson meanwhile has stated in print that Ferdinand “had no wish to go whatsoever”.

Wherever the truth lies, the goal-scoring onus now lay entirely with Shearer and poor strategy soon turned into outright disaster when ‘Wor Al’ sustained a serious ankle injury in a pre-season friendly ruling him out for a big chunk of the campaign to come. In a panic Dalglish rang Sir John and instructed him to prevent the Ferdinand deal. But it was too late.

Any club would miss 40-plus league goals and with Jon Dahl Tomasson and Andreas Andersson – two of Dalglish’s aforementioned flops – bagging just five between them as each struggled to settle and make a mark, Newcastle’s league standing floundered. By the season’s end they finished 13th with only Wimbledon scoring fewer goals overall.

Yet still Dalglish might have been spared and excused had the style of football remained. Alas, it did not, with an early eagerness to play a front three of Shearer, Ferdinand, and Asprilla giving way throughout this season to endeavour and caution. Just four games into the following campaign the legendary figure was gone.

Kenny Dalglish was brought in to gently apply the handbrake on Keegan’s out of control funmobile. Ultimately, he pulled too hard.

Tino Asprilla’s hat-trick against Barcelona turns 22 today. Blow the dust off your VHS copy of ‘Viva Asprilla’ and crack open a Newcy Broon.pic.twitter.com/VbIsR9OQrv

In September of the Scot’s only full season in the north-east Barcelona came to town for a Champions League clash. Tino Asprilla gave the fans an early goodbye gift that night with a sensational hat-trick and a team featuring Figo and Rivaldo were blown away by a Newcastle side that was blood-thirsty and brilliant, spurred on by a savage atmosphere that probably gave everyone present lifelong tinnitus.

Read: Faustino Asprilla: The mercurial Colombian who could win a game on his own – if he felt like it