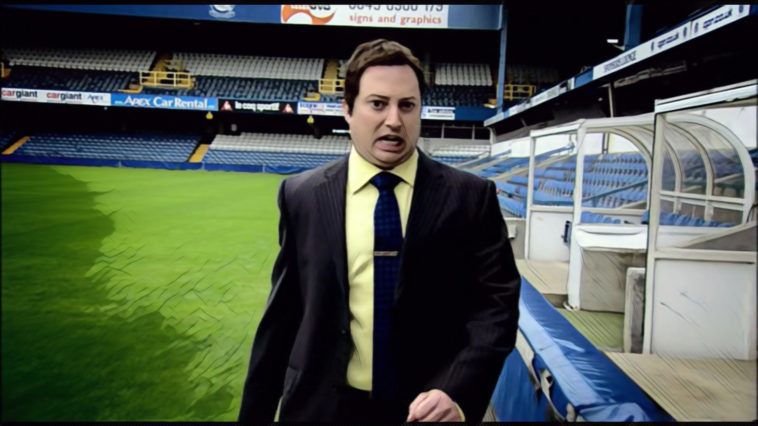 Two of our favourite things to do here at The Football Faithful are watching football and having a laugh.

So why not combine those two loves and enjoy some of the funniest comedy football sketches ever? The nineties and noughties were definitely a golden age for comedy bits mocking football on British television, but hopefully we will see a return to those glory days in the near future.

Five of the funniest comedy football sketches ever:

Almost certainly the greatest football comedy sketch of them all, David Mitchell lampoons the overhyped and saturated nature of Sky Sports’ coverage of the Premier League in the brilliant That Mitchell And Webb Look.

The comedian’s character gets more excited and speaks in a higher tempo as the parody TV spot goes on, even if there is little to get so worked up about in all actuality. Sound familiar?

“Thousands and thousands of hours of football, each one more climactic than the last! Constant, dizzying, 24-hour, year-long, endless football! Every kick of it massively mattering to someone presumably!”

One of the most well-known comedy sketches on football ever, Steve Coogan’s Alan Partridge has a go at commentating over highlights of some goals ahead of the 1994 World Cup despite knowing very little about the sport itself.

“Shit! Did you see that? He must have a foot like a traction engine!”

We all know at least one person who proclaims to be a football fan, but demonstrates they know absolutely sod all about the game once they open their mouth. In the nineties, it was so much worse, as the success of the Premier League attracted a whole host of new fans from outside of English football’s traditionally working-class supporter base who knew little to nothing about the sport.

Jon Thomson excellently satirised this new breed of middle-class fans on BBC’s The Fast Show with his character Roger Nouveau, who changed his allegiance from Manchester United to Arsenal, but considered changing to Newcastle Athletic, and also believes Dennis Bergkamp “plays for Arsenal, not for Holland”.

Once again That Mitchell And Webb Look turns its attention to the beautiful game, with Robert Webb playing a character who has suddenly remembered he’s a huge fan of Liverpool after they’ve won the European Cup, while his colleague played by David Mitchell completely obliterates the notion of fandom.

“I’ll admit I don’t quite follow how you, a man who lives over 200 miles from the home ground of your chosen team can claim some deep attachment to a bunch of overpaid higher hands from all four corners of the globe who temporarily wear the same coloured shirt as you’re currently wearing – but then maybe I’m a bit slow.”

Is this a comedy bit or a mini documentary on youth football coaching in Britain in the nineties? It’s hard to discern, given how well Hugh Laurie parodies the average football manager of the time.

But as Stephen Fry’s character says, if you want your child to be a “premiere” league foot-baller, you want to send your children to the Dave Wilson School.

“Football is a simple game. Now what is the object of the game of football? Run into the box and fall over.”

Read: David Ginola was a glamourous scorer of great goals