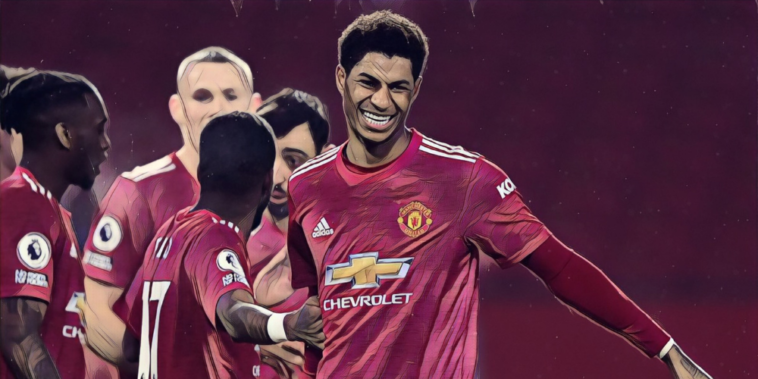 Manchester United’s 9-0 win over Southampton equalled the record for the biggest winning margin ever in the Premier League.

Ole Gunnar Solskjaer’s side ensured their place in Premier League history with a ruthless attacking display against an understrength Saints side, who finished the game with nine men after having both Alexandre Jankewitz and Jan Bednarek sent off.

Jankewitz’s dismissal came after just 79 seconds and the home side punished the youngster’s early ill-discipline, hitting nine without reply on an embarrassing evening for Ralph Hasenhuttl’s side.

After Southampton’s nightmare at Old Trafford, we look at the biggest wins in Premier League history:

Watford were relegated from the Premier League this season and it was results like this that contributed to their demise, the Hornets on the wrong end of an absolutely devastating one-sided thrashing at Manchester City.

Unfortunately for Quique Sanchez Flores, it came in just his second match after returning to the Watford dugout, losing by eight goals at the Etihad.

It was the quickest any team had ever scored five goals in an English top flight match (18 minutes), as the reigning champions were determined to make up for their shock 3-2 defeat to Norwich City the previous week. Remarkably, Raheem Sterling didn’t even get a minute of game time in this fixture, but Pep Guardiola’s side still had more than enough firepower to win extremely comfortably.

Ranking the 10 best Premier League players of the 2010’s

Well, well, well. How does it feel to be on the other end of a complete shanking, Southampton? It was only a little more than six years ago that the Saints dished out a club record beating of their own, defeating Sunderland by eight goals to nil.

The South Coast outfit were close to their peak at that stage, playing this game with an impressive line-up: Sadio Mane, Toby Alderweireld and Dusan Tadic, before they made big moves elsewhere; then you had guys like Victor Wanyama, Shane Long, Nathaniel Clyne, Graziano Pelle and Morgan Schneiderlin when they were still very good. What would they give to have a squad like that now?

The Black Cats somehow avoided relegation that season, but they were generally terrible for several years before eventually suffering the drop. The whole affair was summed up by the opening goal of the game, Santiago Vergini’s spectacular 12th minute volley – past his own goalkeeper.

The Blues were in an unforgiving mood when they faced Aston Villa in December 2012, putting eight past the visitors at Stamford Bridge.

It was 3-0 by half-time, but the Villains were unable to put any respectability on the scoreline after the interval. Things only spiralled in fact, and Chelsea ended the game with seven different goalscorers.

For all the flak Chelsea have gotten over the years for being defensive and parking the bus under managers like Jose Mourinho and Antonio Conte, they have always been able to find the net without much bother.

That was particularly the case in the 2009/10 campaign when, under the guiding hand of Carlo Ancelotti, the Blues scored 103 goals on their way to winning the title. That was a Premier League record until Man City scored 106 times in the 2017/18 season.

This fixture fell on the last day of the season, when the South West London outfit picked up the trophy, but it was most notable for a heated disagreement between Frank Lampard and Didier Drogba over who would take their second penalty of the game. Although the Ivorian was chasing the Golden Boot, Lampard took it as he usually does, but they soon made up.

On this day: 2010 – Chelsea won the Premier League after beating Wigan 8-0 on the last day of the season. #CFC #Chelsea pic.twitter.com/09KKQXi4zw

As first games go, it doesn’t get much better than this. Bobby Robson had just taken the reins at his local club Newcastle United and immediately breathed new life into the organisation, which had become toxic under his predecessor.

Team morale had steadily eroded under Ruud Gullit, culminating in an embarrassing defeat to Sunderland in the Tyne-Wear Derby. The Dutchman’s decision to drop Alan Shearer in that game was described by goalkeeper Shay Given as “the single stupidest decision ever made by a Newcastle manager”.

It proved to be his undoing, and Robson came in off the back of successful stints at Porto, Barcelona and PSV Eindhoven. He immediately got the best out of Shearer, who scored five goals in an 8-0 thrashing of Sheffield Wednesday.

It truly is a miracle that Wigan Athletic managed to survive the drop in the 2009/10 season, considering they were on the received end of two maulings in the one campaign.

On this occasion Jermain Defoe would set a joint-record for the most Premier League goals in one game by scoring five for Tottenham Hotspur. The other goal scorers were Peter Crouch, Aaron Lennon, David Bentley and Niko Kranjcar.

The long-standing record for biggest winning margin has now been matched twice in two seasons. But in the 14 years since Manchester United crumpled Ipswich Town like a paper cup, it seemed like no one would match that elusive 9-0 scoreline.

Andy Cole made history that day, becoming the first player to score five goals in a single Premier League match. Mark Hughes nearly scored a spectacular bicycle kick, only for it to smack off the crossbar and fall to the feet of Cole for an easy tap-in.

The Welshman would go on to score twice anyway, with Roy Keane and Paul Ince rounding out the scoreline. Curiously, Ipswich are the only team on this list to get relegated in the same season as suffering their record Premier League defeat.

Southampton headed home from Manchester on Tuesday night with their tails firmly between their legs, an incredible embarrassment but one that had an all too familiar feel after this thumping by Leicester last season.

It all went downhill for Southampton when they suffered the double whammy of conceding a Ben Chilwell goal and a Ryan Bertrand red card in almost the same breath. But there shouldn’t be any excuses for a performance that was so bereft of effort, energy or belief.

Once the goals starting coming, you had no confidence that the home side would be able to stop them flowing. Manager Ralph Hasenhuttl was left clinging to his job after this result, though to his credit engineered a sharp upturn in results following the loss that moved the Saints well clear of danger and restored his reputation.

So here we are, Manchester United equalling the Premier League’s biggest winning margin and Southampton suffering a second 9-0 defeat in two seasons.

A Southampton side short of several senior names were already up against it when travelling to a Red Devils side in title contention, before a rash moment from teenage debutant Alexandre Jankewitz gave them a mountain to climb.

The 19-year-old’s challenge on Scott McTominay was wild and fully deserving of a straight red after just 79 seconds, his early bath not the way the youngster will have envisaged a dream debut at Old Trafford.

That moment of madness led to a punishing performance from the home side with Anthony Martial scoring twice, in addition to goals from Aaron Wan-Bissaka, Marcus Rashford, Edinson Cavani, Scott McTominay, Bruno Fernandes and Daniel James.

Jan Bednarek also scored an own goal before later being sent off, in what proved another haunting experience for Hasenhuttl’s Saints.

Read: Ranking the 10 best Premier League players of the 2000’s