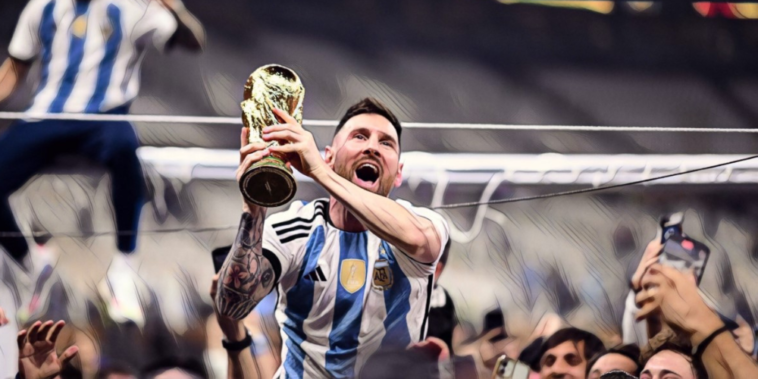 Lionel Messi is celebrating after Argentina were crowned world champions in Qatar, with the South Americans beating France in an epic final.

Messi was the central figure in their triumph and was awarded the Golden Ball, having scored seven goals – including two in the final – to improve his claim as the greatest footballer of all time.

Here are the nine players to have achieved the feat.

Bobby Charlton was the first man to achieve the feat, having been named as winner of the Ballon d’Or following his role in England’s World Cup success on home soil in 1966.

Charlton was instrumental to the Three Lions’ triumph, with the midfielder scoring three goals. He opened the scoring in the group stage win over Mexico, before producing one of his defining performances in the semi-final victory against a heavily-fancied Portugal side.

Charlton scored both goals in a 2-1 win over the Portuguese at Wembley and featured in the final as West Germany were beaten 4-2 after extra time. He was named as winner of the Ballon d’Or later that year, becoming the second Englishman – after Stanley Matthews – to win the award.

Two years later, Charlton starred as Manchester United became the first English team to win the European Cup. He scored twice as the Red Devils beat Benfica 4-1 after extra time in the final, with the club’s success on the continent coming just a decade after the Munich Air Disaster.

Franz Beckenbauer is regarded as one of the greatest defenders of all time, with the German great a pivotal figure in the success of club and country during the 1970s.

Beckenbauer was the lead name of the West Germany side that won back-to-back major tournaments, following success at the 1972 European Championship with victory in the 1974 World Cup on home soil.

He captained the side to those successes and also led Bayern Munich during their golden era in the European Cup. The Bavarians were crowned European champions in three consecutive seasons between 1974 and 1976.

🏆🏆 The elegant and dominant Germany defender lifted the #WorldCup trophy as captain in 1974 & repeated the feat as a manager in 1990.

Beckenbauer was named as winner of the Ballon d’Or for the first time in 1972 and added a second award in 1976. He is one of two Germans to have won the award on more than one occasion, alongside Karl-Heinz Rummenigge.

He is also one of three men, alongside Brazil’s Mário Zagallo and France’s Didier Deschamps, to have won the World Cup as a player and as a manager after coaching West Germany to success in 1990.

Another great of German football, Gerd Muller featured alongside Beckenbauer during those triumphs for West Germany and Bayern Munich.

After winning the Golden Boot at the 1970 edition, he scored the final winner as West Germany came from behind to beat the Netherlands in the 1974 decider.

Muller had earlier won the Ballon d’Or (1970) for his exploits in that summer’s World Cup and a prolific domestic campaign with Bayern Munich, in which he won the European Golden Shoe and scored 42 goals in all competitions.

His goals were crucial to Bayern Munich’s dominance of the European Cup in the 1970s, as he finished as the tournament’s top scorer four times in five seasons, winning the trophy in 1974, 1975 and 1976. He remains the Bundesliga’s all-time record goalscorer, with 365 goals in 427 appearances.

Paolo Rossi’s inclusion in the Italy squad for the 1982 World Cup was criticised, with the forward having only recently returned from a two-year suspension for his role in a Serie A match-fixing scandal.

Italy manager Enzo Bearzot gambled on Rossi however, a gamble that proved inspired as he illuminated the tournament. After a slow start, Rossi burst into life with a hat-trick against Brazil that confirmed the Azzurri’s place in the semi-finals.

He scored both goals in the last-four win against Poland, before opening the scoring as Italy defeated West Germany to win a third World Cup and first since 1938.

"Your whole life is inside that trophy" 🏆#OTD in 1982, @PablitoRossi helped Italy win their third world title. The @azzurri legend shared his memories 🇮🇹🙌 pic.twitter.com/6O0UGB00Jq

Rossi is one of just three players – alongside Garrincha and Romario – to have won the Golden Boot, Golden Ball and World Cup in the same tournament, with his performances later recognised with the Ballon d’Or.

He later formed part of the Juventus team that won the European Cup for the first time in 1985, beating Liverpool in a final overshadowed by the Heysel Stadium disaster.

Zinedine Zidane was the face of France’s first triumph on the world stage, as the midfielder scored twice in the final win over Brazil in 1998.

Zidane’s tournament has often been remembered for that decisive contribution, but began in mixed fashion as he became the first Frenchman to be sent off at a World Cup against Saudi Arabia. After returning from suspension he helped lead Les Bleus to the final, where his brace of headers saw the host nation beat Brazil 3-0 at the Stade de France.

He was named as winner of the Ballon d’Or and FIFA World Player of the Year for his contribution to France’s success.

Zidane signed for Real Madrid in a then-world record £46m deal in 2001 and ended his debut campaign as a European Champion at the Bernabeu. His stunning volley decided the Champions League final, as the Spanish giants beat Bayer Leverkusen 2-1 at Hampden Park.

Rivaldo was one of football’s finest players at the turn of the millennium, with the Brazilian forward developing a reputation for the spectacular during spells at Deportivo La Coruna and Barcelona.

He was named as winner of the Ballon d’Or in 1999, having inspired Barcelona to La Liga title success and Brazil to the Copa America, a tournament which saw him win both the Golden Boot and Golden Ball.

Rivaldo had been criticised in Brazil for the nation’s failure to win past tournaments, including the 1996 Olympics and 1998 World Cup. He had considered retirement due to the criticism but delivered for the national side with a brilliant 2002 World Cup campaign.

💬 “For me, he was the most important player for Brazil at the 2002 #WorldCup,” said Felipão of @RIVALDOOFICIAL 🇧🇷

🧙‍♂️ We hope you enjoy watching his wand of a left foot. We hope Rivaldo enjoys his 48th birthday 🎉 pic.twitter.com/xh509vfS8S

His five goals saw Rivaldo finish as runner-up for the Golden Boot behind teammate Ronaldo, as Brazil were crowned world champions for a fifth time in Japan and South Korea. He formed part of an iconic frontline alongside Ronaldo and Ronaldinho, which was dubbed the ‘Three Rs’.

Rivaldo signed for AC Milan on a free transfer following the World Cup and won the Champions League in his debut season with the Rossoneri. He scored twice during the European campaign, but was an unused substitute for the final win over Juventus.

The second of three Brazilians in this feature who formed part of the nation’s 2002 World Cup success.

That tournament was the breakthrough for Ronaldinho on the world stage, as the fun-loving forward joined forces with Ronaldo and Rivaldo in Japan and South Korea. He had demonstrated his potential with the Golden Ball as part of an inexperienced Brazil side at the 1999 Confederations Cup, before shining during the Selecao’s World Cup campaign in the Far East three years later.

He scored two goals, including a memorable winner against England in the quarter-finals as his dipping free-kick deceived David Seaman.

Ronaldinho was a joy to watch 🥰#UCL pic.twitter.com/fzcqmEJpOG

His performances earned the attention of Europe’s elite at club level and Barcelona won the race for his signature in 2003. Arriving at a Barcelona team without a major trophy in four seasons, he helped inspire the club’s return to the pinnacle of European football.

Ronaldinho’s joyous brand of football was the driving factor behind back-to-back league titles and the 2006 Champions League, with his performances recognised with the Ballon d’Or in 2005 and FIFA World Player of the Year awards in both 2004 and 2005.

Kaka also formed part of Brazil’s 2002 World Cup-winning side, but had a peripheral role in their campaign. The midfielder featured for just 25 minutes at the tournament, all of which came in the 5–2 group stage win against Costa Rica.

He moved from Sao Paulo to Europe to sign for AC Milan in 2003, where he scored almost a century of goals across six seasons. His finest football came during an extraordinary 2006/07 season, a campaign which saw Kaka cement his status as Europe’s best player.

He scored 18 goals in all competitions and finished as the Champions League’s leading scorer, as the Rossoneri were crowned European champions. He produced a devastating performance across two legs as Manchester United were beaten in the semi-final, before Milan exacted revenge for their final defeat two years earlier after beating Liverpool in Athens.

Lionel Messi is the ninth man to have won the World Cup, European Cup and Ballon d’Or, after ending his long wait for success on the world stage with Argentina in Qatar.

In his fifth tournament, Messi rose to the occasion. He led Argentina to the title with a series of outstanding performances, scoring seven goals and providing a further three assists.

He scored twice in the final and once more in the shootout against France, as La Albiceleste triumphed on penalties following a thrilling 3-3 draw with the defending champions.

Messi’s performances were recognised with the Golden Ball, as he became the first player in history to win the award in two different World Cups. His success in Qatar is the culmination of an incredible career, for a footballer many feel is the greatest to have played the game.

His list of honours now includes four Champions League titles and a record seven Ballon d’Ors, alongside the feat of captaining Argentina to a third world title.