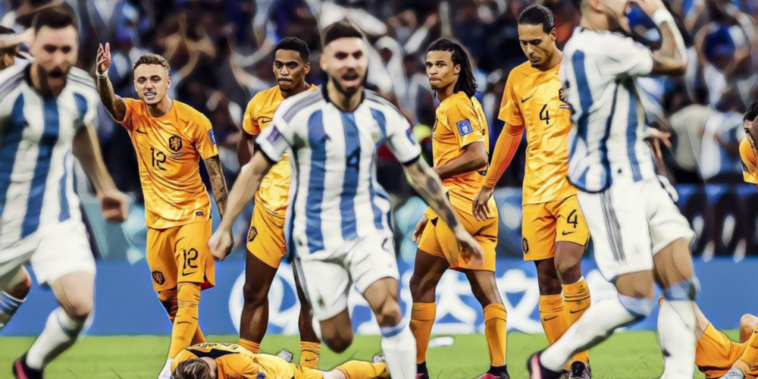 The FIFA World Cup concluded in compelling fashion at the weekend, with Argentina celebrating a third triumph on the world stage after a thrilling final win over France.

It was a fitting conclusion to the World Cup action in Qatar, a tournament of controversy, upsets, and unforgettable moments.

Here are five games that defined the 2022 World Cup.

It seems an awful long time ago now, but day three of the tournament provided one of the World Cup’s all-time great shocks.

Argentina arrived in Qatar among the tournament favourites and justified that label after being crowned world champions, but their campaign began in disastrous fashion after a defeat to Saudi Arabia.

Lionel Messi’s penalty had given the Argentines a first-half lead, but La Albiceleste would come to rue a succession of missed chances – including three goals disallowed for offside – in a stunning result. Saudi Arabia were a team transformed after the break, going after the tournament favourites with a bold high-pressing approach. It unnerved Argentina and lead to an incredible comeback, as goals from Saleh Al Shehri and Salem Al Dawsari sent shockwaves through the tournament.

Saudi Arabia coach Hervé Renard after their 2-1 victory over the Albiceleste:

“Argentina are going to advance out of the group stage and will be champions.”

He masterminded Argentina’s only loss in their last 43 games 🤯 pic.twitter.com/Ag41oxZNGh

Saudi Arabia had won just three previous games in their entire World Cup history, but ended Argentina’s 36-game unbeaten run that had stretched three years. It was chaotic and compelling viewing at the Lusail Stadium, as the Green Falcons – ranked 51st in the world – secured a famous win.

Japan pulled off another upset to beat Spain in the group stage, a result that included controversy and had implications for one of football’s most famous nations.

The Japanese had already beaten Germany in their tournament opener, but defeat to Costa Rica left the Samurai Blue in need of a result against a Spain side who had impressed to date. Alvaro Morata headed home an opener for the dominant Spaniards in the first half, but Japan dug deep to stage a fightback.

Having come from behind to beat the Germans, Japan repeated the feat with Ritsu Doan continuing his super-sub role with a fierce strike from the edge of the area.

Then came the controversy. Ao Tanaka completed the turnaround after turning in Kaoru Mitoma’s cross, though the ball had initially appeared to have gone out of play on the byline before Mitoma’s cutback.

A lengthy VAR check followed before the goal was given, with the full curvature of the ball not deemed to be over the line. Japan celebrated and held on, topping a group that contained both the 2014 and 2010 world champions.

It was Germany – 4-2 victors over Costa Rica in the other game – who crashed out after finishing behind Spain on goal difference, with the four-time winners suffering a second straight group stage elimination.

That 50-second spell where Costa Rica and Japan were going through to the knockout round and Germany and Spain were going out was one of the most magical moments of this World Cup. What a time to be alive.

Morocco were the underdog tale of the tournament and as the full-time whistle blew against Portugal, the Atlas Lions celebrated unprecedented history.

No African team had ever reached a World Cup semi-final, until now. Walid Regragui’s team had reached the final four and had done so in impressive fashion, taking the scalps of Belgium, Spain and Portugal in the process.

Regragui had only taken charge of Morocco two months earlier and had been an unpopular appointment, but he departed Qatar as the leader of a team who captivated their audience. Morocco conceded just one goal – an own goal – until their semi-final exit to France, with their resolute rearguard providing the foundation for their history-making win.

Youssef En-Nesyri’s first-half winner saw Morocco beat Portugal in the last eight, with the Sevilla striker heading home after an extraordinary leap to score a famous winner. Morocco and their fans celebrated as the nation moved into the uncharted territory of a World Cup’s latter stages, while Portugal’s Cristiano Ronaldo departed in tears as his dreams of winning football’s biggest prize came to an end.

Their route to the semifinals:

A game that truly had it all, there’s something about World Cup meetings between the Netherlands and Argentina that just create epic drama.

There was narrative and needle as the two teams went head-to-head, with the conclusion to the contest proving gripping viewing. Argentina looked set to progress to the last four after taking a two-goal lead, but their two-goal cushion melted away under the pressure of an aerial bombardment.

It was fascinating to watch Louis van Gaal abandon the Dutch principles and lump in long, loading the mixer with orange-shirted giants and piling the pressure on the South Americans. Virgil van Dijk, Luuk De Jong and Wout Weghorst all took turns in being the focal point of the attack, with the latter transforming the game off the bench.

He headed home a first for the Dutch with seven minutes of normal time remaining, before scoring a stunning second in the tenth minute of stoppage-time. The last-gasp free-kick – rolled into Weghorst’s feet when all watching on anticipated a shot at goal – was calm and chaos in one moment, with the towering centre-forward turning home an equaliser to force extra time.

In amongst it all were confrontational clashes between the two sets of players, with Leandro Paredes booting the ball in the direction of the Dutch dug-out to spark a melee. There were 16 yellow cards and one red awarded as tempers boiled over.

It was Argentina who ultimately triumphed on penalties, as the emotions swung once again in a game that few will forget.

Standout Moments from the World Cup 📸

Argentina’s celebration against the Netherlands seems even more iconic after they went onto lift the trophy.

Argentina vs France. Lionel Messi vs Kylian Mbappe. The sub-plots and narratives were easy to make and the final was a tale that did not disappoint.

It was Lionel Messi who led Argentina to World Cup glory, beating France on penalties in a compelling climax to Qatar 2022. La Albiceleste raced into a two-goal lead at half-time through Messi’s penalty and Angel Di Maria’s brilliant goal on the counter, but the magic of Mbappe brought France back into the game.

Two goals in two minutes forced extra time, before the momentum swung back in Argentina’s favour as Messi struck his second of the game from close range. Mbappe completed his hat-trick from the spot – the first treble scored in a World Cup final since 1966 – to level once again, but still ended up on the losing side as Argentina held their nerve in the shootout.

As Argentinas’s coronation was confirmed, Messi slumped to the ground and was engulfed by teammates. Soon after he was awarded the Golden Ball and hoisted aloft the World Cup trophy, perhaps the perfect ending for the footballing romantics as the game’s greatest, with his last shot, conquered the world.

Leo Messi and the World Cup are in Argentina 🤩🇦🇷🏆 pic.twitter.com/23Ui1OGLGK