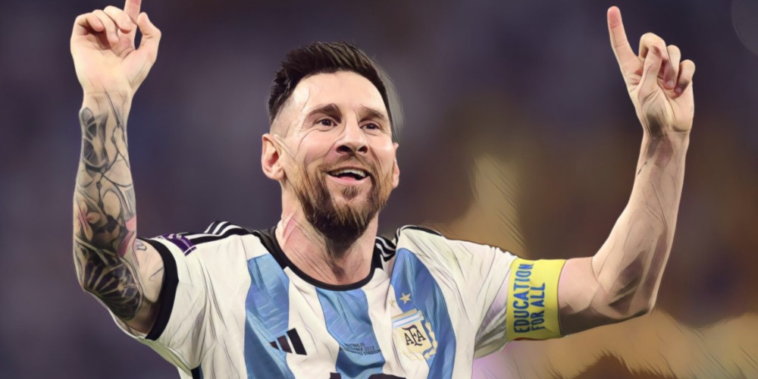 The final whistle has been blown on the 2022 FIFA World Cup, a tournament full of drama, sub-plots and unforgettable moments.

It’s Argentina who are the new world champions, with Lionel Messi winning football’s greatest prize after a final with France that will be remembered as arguably the best ever.

Following three weeks of thrilling action in Qatar, we’ve picked out our star performers from the finals. Here is The Football Faithful’s World Cup Team of the Tournament.

Exceptional from start to finish for the underdog story of the tournament, the Moroccan goalkeeper failed to concede a single goal from an opposition player until the semi-final defeat to France.

No African side has ever previously reached the semi-final stage and Morocco’s success was built on the often unbreakable organisation of their defensive unit. Behind a brickwall backline it was Bounou, whose shot-stopping has attracted the interest of Europe’s top clubs.

Yassine Bounou's son thinking the 🎤 to be 🍦 is supremely adorable! ❤️ #FIFAWorldCup pic.twitter.com/YTorvQwDvM

The 31-year-old was named as La Liga’s Best Goalkeeper last season, but his World Cup heroics have shone an additional spotlight on his talent.

Morocco’s star name did not disappoint during a fairytale run to the semi-finals, as the Atlas Lions became the first African team to reach the last four.

Hakimi rampaged forward and defended astutely, as part of a resolute Moroccan backline which provided the foundation for their success.

We gave it all. The dream of a team, of a whole country, is over. But we have to be proud of what we have done. We fought until the last second and we leave with our heads held high.We will continue to try and give our all for this nation. Thanks to all Moroccans for your support pic.twitter.com/By6ev5uwEC

His Panenka penalty winner against Spain was a demonstration of his quality and confidence, while his post-match celebrations with his mother became one of the defining images of Morocco’s tournament.

Nicolas Otamendi featured in every second of Argentina’s triumph, with the veteran defender an outstanding contributor to the champion’s success in Qatar.

Otamendi’s best days appeared to be behind him after he departed Manchester City in 2020, but the 34-year-old produced a series of excellent showings at the World Cup.

A leader of La Albiceleste’s side, he won more aerial duels than any other defender (20) and was crucial to Argentina’s build-up, leading his teammates for successful passes (462) and long balls (11) among outfield players.

Viewed as arguably a weak-link by those outside Argentina pre-tournament, he has instead proven to be a pillar of strength in the nation’s third World Cup triumph.

Josko Gvardiol enhanced his reputation as one of European football’s best up-and-coming defenders as Croatia reached the semi-finals.

The 20-year-old was the masked assassin who robbed forwards of possession in Qatar, proving a dominant force in his defensive duels. He struggled against Lionel Messi in the semi-final, but the Argentina icon has made no shortage of elite defenders look foolish during a career of greatness.

Croatia's youngest ever scorer at the World Cup. #Vatreni pic.twitter.com/YPtr3iploc

That will prove an invaluable lesson to Gvardiol, who has the potential to be one of the best defenders of his generation.

Hernandez grasped his opportunity in the side following an unfortunate injury to his brother, Lucas, in France’s opening game.

From there the left-back was a fixture in the team and impressed with his enterprising football, where he created two assists and opened the scoring in the semi-final win over Morocco.

He had a difficult evening in the quarter-final win over England, but recovered to help France into a second successive World Cup final.

Europe’s top clubs have put Amrabat firmly on their radar after a string of superb performances in Qatar.

The industrious ball-winning machine snapped into challenges and hunted down possession, recovering the ball and using it intelligently in the Moroccan engine room.

His lung-busting run and crunching challenge on Kylian Mbappe in the semi-final epitomised his contribution to the cause, with Amrabat leaving everything out on the Qatari pitches.

Sofyan Amrabat won possession 57 times at the 2022 World Cup, the most by any African player at a single tournament since 1966.

A phenomenal effort at a record breaking tournament for his country. #MAR #FIFAWorldCup pic.twitter.com/ohCnYV5XvO

Fiorentina will face a fight to keep hold of his services, with the World Cup having elevated his reputation to a new level.

It’s been a rapid rise for Enzo Fernandez in recent months, with the midfielder now a World Cup winner.

Fernandez only made his debut for Argentina in September, but forced his way into the starting side in Qatar after coming off the bench to score a stunning goal in the group stage win over Mexico. From there the 21-year-old went from strength to strength, with a number of classy displays in the Argentine engine room recognised with the Best Young Player of the Tournament award.

Enzo Fernández is the first South American to win the official FIFA Young Player of the Tournament award. 🇦🇷#FIFAWorldCup pic.twitter.com/lwyo9x8rGy

He was excellent in the final, leading the decider for touches (118), successful passes (77) and tackles (10). No player has made more tackles in a World Cup final since 2006. Europe’s wealthiest sides are on red-alert, with Benfica set for a huge windfall on a talent only signed from River Plate last summer.

Antoine Griezmann’s move to a midfield role proved a revelation for France, with the 31-year-old the creative conduit between Les Bleus’ engine room and front three.

His ability to fashion chances from both open play and set-pieces was crucial to the French in Qatar, where he led the tournament for assists alongside Harry Kane, Lionel Messi and Bruno Fernandes.

France might have fallen short at the final hurdle, but Griezmann delivered once again in a major tournament. Industrious and inventive in his new deeper role, it was a position he looked right at home in from the first minute. He was exceptional in the knockout round wins over England and Morocco, orchestrating both games as France progressed to the final.

Each of Argentina’s three World Cup triumphs have been built on the individual greatness, with Qatar 2022 set to be remembered as Lionel Messi’s tournament.

Messi’s status as an all-time great was assured long ago, but his role in his country’s World Cup success has elevated arguably football’s finest ever talent to new levels. He scored seven goals, including two in the final, and provided a further three assists for Argentina, who will celebrate this success for a long time to come.

Football fans across the world will revel in their triumph, a fitting conclusion to Messi’s career on this stage. After the hard-luck stories of past finals, it was a warming moment to see the seven-time Ballon d’Or winner host aloft football’s most prestigious trophy. No player had a bigger role in that success than Messi.

After starring in Russia four years ago, Kylian Mbappe produced another sensational tournament for France.

He scored eight goals to win the World Cup’s Golden Boot, with only Ronaldo (2002) having matched that total in a single tournament since 1970. Mbappe’s goals included a hat-trick in the final, as he became just the second man to score a treble in a World Cup final and the first to do so in a losing side.

It was harsh on the 23-year-old, who demonstrated his ability to change the biggest games in an instant in Qatar. Incredibly, it’s now 12 World Cup goals for Mbappe, a figure that is level with Pelé and one just five players can better.

It is not inconceivable that Mbappe could feature in another three tournaments. No record appears safe from the Frenchman.

Julian Alvarez began the tournament on the bench for Argentina, but ended it with a World Cup winners’ medal after a key role in their success.

The opening defeat to Saudi Arabia prompted change and chances, with Alavarez one of those to take his opportunity. He led the line superbly in Qatar, chasing lost causes as a focal point and taking the chances that came his way.

After opening his account against Poland with a fine finish, he scored in the last-16 win over Australia and twice in the semi-final victory against Croatia. It was a tournament to remember for Alvarez, who emerged from the shadows to thrive in the spotlight of a World Cup triumph.