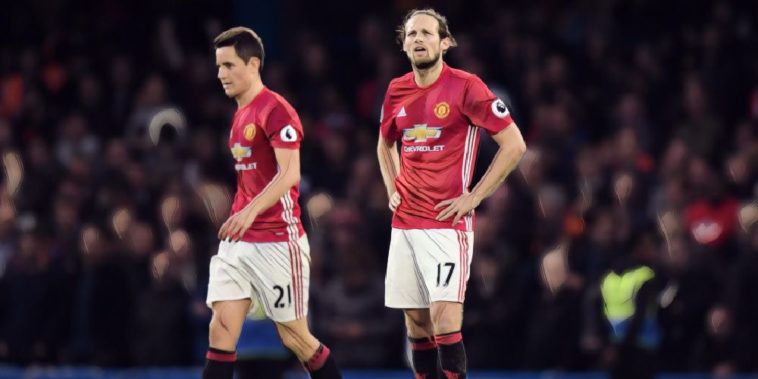 It’s safe to say that the Red Devils have allowed some quality players to leave Old Trafford in recent years.

It’s no secret that Manchester United haven’t exactly been a bastion of stability since Alex Ferguson’s retirement in 2013. The club have had four managers since then (five if you count Ryan Giggs’ stint as caretaker), bought a boatload of players for exorbitant fees, and sold a bunch as well, but haven’t come anywhere near challenging for the title.

As we’ve listed here, some of those let go should never have left the club. They were good enough to stay or would have come good if given the right time and environment, but poor judgement and a lack of foresight saw them prematurely shown the door.

The fact that these players either did not succeed or were sent packing is indicative of a wider problem enveloping United right now; the lack of planning is having a detrimental effect on performances on the pitch, and highlights the desperate need for a sporting director.

We’ve not included Romelu Lukaku, because his desire to leave United in the summer outweighs any positive effect he could have had on this season.

Five players Manchester United should never have sold (since 2013):

There is a case to be made that Ander Herrera was Man United’s best player last season; he was at the very least one of their most important. Now without him, the team are learning just how valuable he was to the club.

The Spaniard didn’t do anything spectacular or flashy, but he was excellent in the transition phases, winning the ball and at breaking up opposition attacks. Some of that was done through cynical fouling, but he could also spot a pass, and United are clearly missing someone with that brio and dynamism.

Herrera’s absence is compounded by the fact he hasn’t been replaced and his stand-ins already at the club are not up to scratch: Scott McTominay is a serviceable midfielder, but needs to add more strings to his bows; Nemanja Matic is barely mobile anymore; and Fred is nowhere near justifying the £52m fee paid for him.

Worst of all, Herrera left the club in the summer for free. He can now be seen filling in at right-back for the odd game with PSG.

United shelled out £80m for centre-back Harry Maguire this summer, but many fans are wondering why it’s his former defensive partner at Leicester City who isn’t at the club as well.

Jonny Evans joined West Bromwich Albion in 2015 having won three Premier League titles with the Red Devils, and immediately became one of the Baggies’ standout performers, nabbing the club’s Players’ Player of the Year Award at the end of the campaign.

If I was putting together a list of 'most inexplicable transfer blunders of the Premier League era', reckon Man Utd selling Jonny Evans while keeping Phil Jones and Chris Smalling would be in the top one.

The Belfast man was never considered the heir apparent to Rio Ferdinand or Nemanja Vidic, but he was a more than competent defender with bags of experience under his belt and he was only 27 at the time. He was playing so well for West Brom there was even a suggestion he could join Manchester City at one point.

That didn’t come to fruition, but when the club were relegated, the Foxes activated his relegation release clause — getting him for just £3.5m. An absolute bargain, Evans formed a formidable partnership with Maguire last season. Although United’s main concerns are not in the backline, the Northern Irishman was unfairly tossed to the side while they persevered with Phil Jones and Chris Smalling.

Daley Blind isn’t the most talented footballers, he hasn’t got the biggest stature and he wouldn’t be considered the most skillful. But he is very very much a James Milner type; a committed and intelligent footballer who can complete a variety of functions within the team.

The Dutchman can play at centre-half, full-back and in midfield, he can take set pieces, he can cross, he can pass very well and he does not lose possession very easily. He sounds exactly like the kind of multi-faceted player they could do with right now.

I want to thank you for all the love and support I received and still get. I will never forget some of the special games and moments, I will miss you ‘The Theatre of Dreams’! But now its time to go home. 🔴 #MUFC (3/3) pic.twitter.com/GScz9Z6teb

Yet Jose Mourinho sold him back to Ajax in the summer of 2018, where he played a key role in the Amsterdam outfit’s amazing run in the Champions League while United floundered in the Portuguese manager’s third campaign in charge.

This is one of the consequences of switching managers so often; players that are brought in by one person can be unfancied by the next guy who comes in. We are seeing that inconsistency bear fruit with the squad United have now.

Don’t get us wrong here, Memphis Depay had a shocking time at Old Trafford, even by his own admission. The Dutch forward showed he had oodles of skill and ability, could be lethal in one-on-one scenarios, and had an eye for goal, but it just never clicked at Man United.

Depay scored just seven goals in 53 appearances, making some comical misses, and struggled under Louis van Gaal’s rigid structure. “It was very frustrating I didn’t reach my usual level,” he wrote in his book The Heart of a Lion. “I had to follow the tactical orders of Van Gaal, otherwise I would certainly lose my spot in the team. Van Gaal doesn’t like players who don’t follow up on his comments.”

The Netherlands international struggled even more under Jose Mourinho, who played him in just four Premier League games before selling him to Lyon for roughly half the price they paid PSV Eindhoven for him. Despite his questionable fashion choices, he has since proven himself to be one of the most talented attacking players in Europe; this season alone he has provided four goals and an assist in seven Ligue 1 games, and scored in consecutive Champions League matches.

Given the injury crisis that is currently besieging United’s forward line, as well as their desire to attack with pace, Depay would certainly fit right back into this team and could ideally play through the middle as well as on the left. But, like Blind, Depay’s sale is characteristic of the scattergun nature of the club in the past seven years.

Okay, hear us out on this one. For almost the entirety of his time at Man United, Marouane Fellaini was a figure of fun, not one that people laughed with, but at. Drawing the ire of the Old Trafford faithful on many an occasion with his brutish style of play and general shithousery, he was viewed as the antithesis of the mystical ‘United Way’.

Here comes the ‘but’, though: but he was a perfectly acceptable Plan B when the team needed a result. Every United manager he has played under has used him to that effect and it worked to a degree. When you look at the side now, there’s barely a Plan A let alone a Plan B.

Despite the fact that he was a much-maligned character, David Moyes, Van Gaal and Mourinho all used him fairly regularly and in some cases he was central to their plans. That’s not to say the Belgian wrecking ball is an elite player by any means, but he was a perfectly serviceable midfielder who could slot in at the base, in the middle or behind the striker.

Fellaini’s move to China in January was greeted cheerily by United supporters, but as with Romelu Lukaku and Herrera the biggest problem was not finding a direct replacement sooner.

See Also: When Fulham did the impossible: Recalling their unforgettable comeback against Juventus