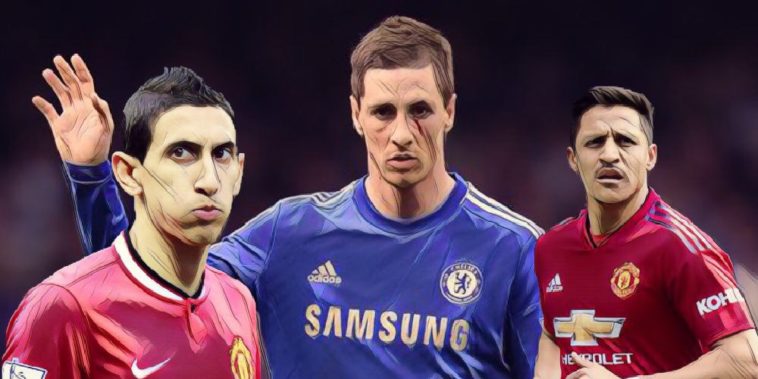 The forward’s high-profile move to United from Arsenal was eagerly anticipated by the club’s fans, though the 30-year-old has proven a major disappointment since his switch in January 2018.

Sanchez is not the only high-profile deal to be regarded as a major flop, and we’ve decided to revisit some memorably poor transfers from the Premier League era.

The Argentine playmaker had helped inspire Lazio to Serie A and Coppa Italia double in 2000, prompting Manchester United to break the British transfer-record to bring the midfielder to the Premier League in 2001.

The £28.1m fee comfortably eclipsed the previous record, and much was expected of Veron who would join the likes of Roy Keane and Paul Scholes in an embarrassment of midfield riches for Sir Alex Ferguson’s all-conquering side.

Despite initially beginning well, Veron soon began to struggle to the pace and physicality of English football, unable to exert the influence on fixtures he had shown during his time in Italy.

United would miss out on the title to Arsenal in his debut season, before reclaiming their crown in 2003. Veron made just 25 league appearances in that second season and after failing to establish himself as a key figure, was sold to newly-rich Premier League rivals Chelsea for £15m after just two seasons at the club.

The Ukrainian superstar had been crowned as Europe’s finest player by winning the Ballon d’Or two years previously, and his arrival would seemingly send an ominous warning to the rest of the Premier League.

The move, however, would prove a major disappointment. Shevchenko would score just nine league goals over two seasons at Stamford Bridge, failing to rediscover his best form before being shipped back on loan to Milan in 2008.

Few forwards have been taken to as affectionately at Anfield as the Spanish star, who established himself as one of Europe’s best players during a prolific three-and-a-half-year spell at Liverpool.

Torres’ performances prompted Chelsea to spend £50m so sign him from their Premier League rivals, a deal which would be the highest fee ever paid by an English club.

His career at Stamford Bridge could hardly have begun worse, Torres taking 903 minutes to score his first Chelsea goal, scoring just once in hist first 18 appearances for the club.

Whilst team success followed in his first full campaign with a Champions League and FA Cup double, Torres struggled to find the form he showed at Liverpool and was often overlooked in favour of Didier Drogba.

A ruthless finisher at Liverpool, Torres would score just 20 league goals in 110 appearances for Chelsea, his fall from grace epitomised by this horror miss at Old Trafford…

That same day, Liverpool had broken their transfer-record themselves to sign Andy Carroll from Newcastle, aware of Torres’ impending move to Stamford Bridge.

The giant Geordie forward had fired Newcastle to promotion the previous season and began impressively in the top flight, scoring 11 goals before his high-profile January switch to Anfield.

The deal would cost a huge £35m for a fairly unproven talent, though hopes were high Liverpool had secured the services of a forward who would lead the line for club and country for seasons to come.

Oh, how they were wrong.

Injury problems halted Carroll’s progress at the club, a brace against Manchester City his only goals in his first half season at the club. He would feature regularly the following season but scored just four league goals, whilst Brendan Rodger’s arrival as manager in 2012 soon saw him deemed surplus to requirements.

He joined West Ham initially on loan before making the move permanently, leaving Liverpool having scored a paltry six league goals in 44 appearances.

One worked out better than the other… 🤔 pic.twitter.com/29YXOX2lyy

The winger had just helped the Spanish giants to Champions League success and starred for the club in recent seasons, whilst his arrival caused great excitement at United with the marquee signing of an elite talent.

Di Maria began well in England, producing a series of impressive performances in the opening weeks of the season before his form drastically dipped.

A burglary at the player’s home was reported to have unsettled his family, and his on-field performances soon suffered. After just one season in England he requested to leave the club, joining French side Paris Saint-Germain after a single season in the Premier League.

His Manchester United career has really been one of major disappointment, the Chilean having looked a shadow of the player who once struck fear into the heart of Premier League defences.

Having secured a straight swap deal with Arsenal involving the under-performing Henrikh Mkhitaryan, United thought they had capitalised on Sanchez’s contract situation at the Emirates and secured the signing of one of the division’s very best.

I remember getting very excited about United signing Sanchez. He had the potential to be a great player for us. Turned out to be a complete disaster and arguably the worst signing in United’s history. Watch him lord it in Italy now 😂 #mufc #AlexisSanchez pic.twitter.com/iqlfPZyzoJ

The forward had scored 60 goals in just 122 league appearances, which suggested United were right, but Sanchez failed to produce his best performances after his high-profile move.

Handed a Premier League record contract thought to be worth £500,000-a-week, Sanchez has scored a meagre total of just three league goals in over 18 months at the club, whilst his displays have often looked uncharacteristically lethargic and disinterested.

United now look set to cut their losses on an expensive mistake, Sanchez set to depart the Premier League after five seasons in England.

Read:Toure, Le Tiss, and Dicks – The Premier League’s most successful penalty takers ever

Read Also: Five of the most disastrous Manchester United signings of the post Ferguson era