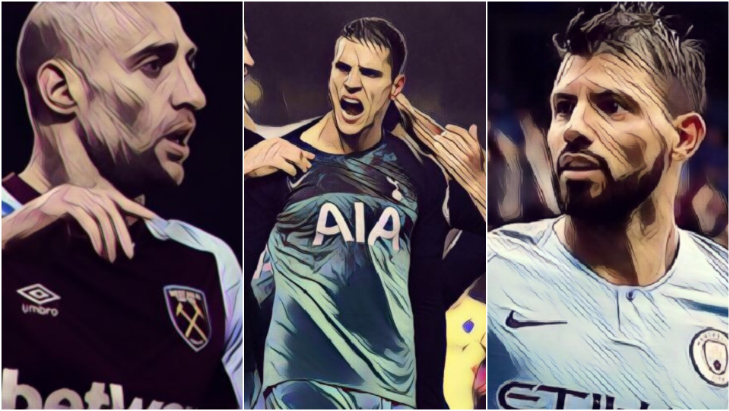 Following his loan move to Chelsea from Juventus, Gonzalo Higuain will become the 67th Argentine player to play in the Premier League. The vast majority of them have been very ordinary players, but a select few can consider themselves among the best ever seen in England.

The Blues are hoping ‘Higi’ will be in the latter category, and get them the goals for which they yearn so desperately as the race for Champions League qualification heats up in the final few months of the campaign. Whether Higuain can manage that or not remains to be seen, but he will aiming to emulate those fellow compatriots who made a memorable impact on English football.

Here are the top ten best Argentine players in the history of the Premier League:

The first entry in this ranking was almost decided by a coin flip, but Manuel Lanzini just about misses out. The West Ham United player has had an impressive Premier League career to date, scoring 19 goals in 88 appearances, but Gabriel Heinze edges it for actually winning the bloody league.

There’s also the fact that the diminutive full-back was a very good footballer – even captaining Manchester United on occasion – who laid claim to the players’ player of the year award in 2004-05. The argument against him is that he spent much of his spell at Old Trafford on the treatment table, but what he did on the pitch isn’t even the most interesting part of his time in England.

Heinze revealed that in a dressing-room confrontation with Roy Keane after a defeat, he told the Irishman to “fuck off”, and the United captain retaliated by knocking him out cold.

The defender would go on to win titles in three different countries after leaving Manchester, although his departure was a source of controversy. Heinze attempted to leave the club to go to Anfield, going so far as to hire Liverpool FC’s solicitor to represent him in a tribunal. He would end up at Real Madrid in 2007, later admitting he regretted how he went about exiting United.

Cambiasso only spent one year in the Premier League, otherwise he would probably be further up this list, but it was a terrific year nonetheless.

The defensive midfielder joined Leicester City in 2014 to add much needed experience to the Foxes’ squad, helping the side avoid relegation in one of the all-time great escapes. He contributed five goals that season, including the third in a shock 5-3 win over Manchester United.

The Buenos Aires native acquired a great affinity with the club and place after his short spell, and has returned to greet the fans on a couple of occasions since leaving in 2015. He retired in 2017 after finishing his career at Olympiakos.

Alan Hansen said the right-winger “was the most impressive Premier League debutant” he had ever seen, after making his first start in a 1-1 draw with Man United. He was also fond of celebrating with a Spider-Man mask, because why not.

In 2013 a tumour was detected in his testicle, but he made a full recovery to eventually return to action the next year. He was let go by the Magpies via a phone call to one of his teammates at the end of the very next season however, leading him to say the club “don’t care”.

Labelled one of the best players in the Premier League at one point by none other than Lionel Messi, Gutierrez wasn’t the most consistent player, but his time in England was never boring.

You might guffaw and chuckle at the suggestion, but Julio Arca deserves to be recognised in this list.

There are Argentinians with far greater talent and ability who have graced the Premier League, but few of them can match his longevity in English football. Only Julian Speroni has had a longer spell as a professional footballer here, but even then he has spent very little of it as a starter in the top flight.

After making 149 Premier League appearances and a bunch more in the second tier, Arca settled into life in the North East so much that he hasn’t left since. Aside from coaching duties at Sunderland, he also returned to football, playing for non-league side South Shields, with whom he won the FA Vase in 2017.

Signing for Newcastle United at the same time as Gutierrez, Fabricio Coloccini experienced the topsy-turvy nature of the club as well, just not quite as dramatically as his teammate.

The central defender was partial to a mistake at the back in the early days of his career on Tyneside, but he would eventually come to be known as Mr. Reliable at the club, taking over the captaincy in 2011.

After 275 appearances and two relegations, Coloccini move back to Argentina in 2016 where he currently plays for San Lorenzo.

The Spurs midfielder was so very close to becoming one of the all-time great flops in Premier League history, but under Mauricio Pochettino he has been transformed into a dependable workhorse.

Lamela joined the club in 2013 as part of Tottenham’s massive spending spree to shore up the hole left by Gareth Bale, which included Roberto Soldado and Paulinho. It was a massive failure however, and the Argentine was destined to fail by association.

Considered as the kind of typical silky-but-soft ‘Spursy’ player the club used to routinely sign, he failed to make much of an impact until his compatriot took charge of the team. While he isn’t an integral part of the first team, he has been invaluable member of the Spurs squad in the past few seasons.

One of the only players to have played nearly the entirety of the first decade of the Sheikh Mansour era, the full-back will go down as a club legend at Eastlands.

Joining from Espanyol in 2008, Zabaleta clearly fell head over heels in love with Manchester City, displaying a passion so rarely seen at the nouveau riche team.

After winning two Premier League titles and several cup winners medals, he headed for West Ham United in 2017, but without the same kind of power in his legs that once allowed him to bomb down the wings.

He may have arrived to the Premier League in the oddest of transfer deals, but Javier Mascherano would leave it with a reputation as one of the most capable defensive midfielders in Europe.

Mascherano barely played for West Ham United, but Liverpool were convinced of his ability nonetheless, paying over £20m for his services.

‘The Little Chief’ became a Champions League and Premier League runner-up at Anfield, before winning an absolute ton of trophies after joining Barcelona in 2010. He is currently playing his days out in China.

The other half of that West Ham United transfer saga, Tevez’s time in England was explosive to say the least. He scored the goal at Old Trafford that kept the Hammers in the Premier League at the expense of Sheffield United, who took the club to court over the eligibility of the player.

Tevez in turn moved to Manchester United that summer on a two-year loan deal, forming one of the most dominant forward-lines in Premier League history with Cristiano Ronaldo and Wayne Rooney, winning two league titles and a Champions League.

The striker’s next move shook English football, as he moved across Manchester to United’s closest rivals, City. It was there that Tevez won yet another title, helping the Sky Blues obtain their first ever Premier League trophy in 2012, following which this amazing image became a thing:

Controversial though parts of his career may be, Tevez is an incredible talent who is viewed as a bit of a lovable scamp by fans of the teams for which he has played, winning the club’s player of the year at West Ham, Man City, and Juventus.

Was there ever any doubt about who would be number one?

We all know why Sergio Aguero is so damn good, so we’ll keep this brief: 214 goals for Man City, the club’s record goalscorer, and the most clinical finisher in the history of the Premier League. Oh, and that goal.

Anyone disagree? I didn’t think so.