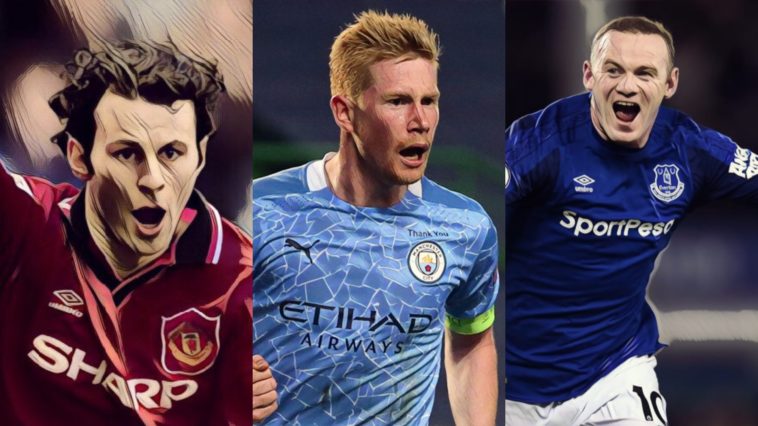 The most important pass in football is the one right before a goal is scored.

Assists weren’t taken very seriously as a metric in football until relatively recently. Indeed, we only know that Thierry Henry holds the Premier League record for most in a single season because Opta combed through old VHS tapes in the early noughties to collect the data on who set up whom for every goal.

For better or worse, assist numbers are almost considered on a par with goals scored when it comes to discussing the value of individual players. While assists don’t tell the full story, they can give us a window into who is effective in the final third.

One of the best in that category is Kevin De Bruyne, who assisted a teammate in the English top-flight for the 77th time at the weekend in Manchester City’s 2-1 win over West Ham United. That moves him in into the top ten list for assists, overtaking Teddy Sheringham.

How does De Bruyne compare with the best of them, and who can he seek to overtake this season?

The top ten players with the most assists in Premier League history:

Generally considered to be one of the best midfielders in the game right now, Kevin De Bruyne has been immense for Manchester City over the past six years, particularly since Pep Guardiola arrived in his second season.

From that point on, the Belgian playmaker has been an assist machine; aside from 2018/19 when he was sidelined with a serious injury, he has reached double digits in this area.

Last season was his best yet with 33 goal involvements, while his 20 assists equalled Henry’s record for a single campaign. De Bruyne already has over 100 assists in all competitions for Man City, and there’s no telling what he’ll finish up with.

Given he only spent nine seasons of his career in England, it’s scary to think of how many Premier League assists David Beckham would have had he never left Manchester United in 2003.

It’s possible that the right midfielder could have challenged the top assist maker on this list if he was a one club man. Then again, he never quite matched the same levels of production when he later played for Real Madrid, LA Galaxy, AC Milan and PSG, so who’s to say.

One thing we know for sure, Beckham had an insanely good right foot on him, which he regularly used to bend free-kicks into the net and swing in a cross to a dangerous area. More often than not he found his intended target.

One of only three active players on this list, James Milner broke through at Leeds United at the age of 16, becoming the youngest player to score in the Premier League at the time.

Following the financial crisis at the Yorkshire club in the early noughties, the midfielder went on to play for Newcastle United and Aston Villa. But it was in the second half of his career where Milner has played his best football.

The Englishman spent five season at Manchester City, winning two league titles, before joining Liverpool where he won the Uefa Champions League and another league title. Although he is not the most creative or prolific of players, Milner has been a consistent provider in the final third, having a goal involvement in all 19 seasons of his career to date.

Five of the best ever Premier League assists by goalkeepers

One of the greatest midfielders of his generation, Steven Gerrard put up incredible numbers over the course of his career. The Liverpudlian scored 120 goals in the Premier League, while setting up another 92 for his teammates.

Although the current Rangers manager never won the league with his beloved Liverpool, Gerrard’s list of accomplishments is still something to behold. The Reds’ top assist maker in Premier League history, he won the Champions League, Uefa Cup and multiple domestic cups over 16 years.

Not bad for a local lad.

One of the best foreign imports of the last 20 years, David Silva may well go down as Manchester City’s greatest ever player.

The Spaniard arrived at virtually the starting point of Man City’s new era, coming from Valencia in 2010. He was there for all four of their title wins before leaving last summer to return to Spain.

In between that time we saw Silva wield those magic feet of his like a talented painter would his brush, creating works of art year in, year out. ‘El Mago’ left City in 2020 with 60 league goals and 93 assists, his personal best coming in 2012/13 when he provided six goals and 15 assists in their first title-winning campaign.

One of the most majestic and spellbinding footballers ever to grace the English game, Dennis Bergkamp’s legacy simply cannot be measured in numbers.

That being said, his stats are bloody good. In 11 campaigns for Arsenal, the Dutchman scored 98 goals and made 92 assists in the Premier League.

Arguably the best second striker in the league’s history, Bergkamp won three league titles during his time in North London and was a key cog in the Invincibles going an entire season unbeaten.

In the pantheon of obscene Dennis Bergkamp finishes, this one has to be up there. My word. pic.twitter.com/V9jWg8C9Oq

After coming through the ranks at West Ham United as a youngster, Frank Lampard fulfilled his potential at Chelsea, where he won three Premier League titles and the Uefa Champions League.

Lampard’s most prolific season came in 2009/10, when he provided 22 goals and 14 assists to Chelsea’s title-winning campaign. During his Premier League career, he provided 91 assists for the South London outfit, 13 for the Hammers, and one for Manchester City.

The second greatest goalscorer in Premier League history with 208 goals, Wayne Rooney was also a master provider as well as finisher of goals.

The Evertonian was a phenomenal striker, but he downplays his own ability in that regard, claiming he is not a “natural finisher”. Rather, it seems Rooney’s inclination was to get involved in the action further away from goal rather than hang off the shoulder off the last man.

Manchester United and England’s top goalscorer of all-time is one of a very small group of players to have both scored and assisted over a hundred goals, alongside Ryan Giggs and Frank Lampard. But his finest assist surely came while playing for DC United in MLS. You remember the one…

It’s easy to forget just how phenomenal Cesc Fàbregas was during his best years. A product of the famed La Masia academy at FC Barcelona, the Catalan broke into Arsenal’s first team as a promising 17-year-old who quickly adapted to the Premier League.

As this writer penned in tribute to the midfielder in 2019, Fabregas was a “creative force with mesmeric ability to put the ball wherever he so chose, he wasn’t one for constructing geometric shapes through complex passing angles. Craft over science, Picasso over Newton.”

Fabregas put up some sensational numbers during his time in the Premier League, though, hitting double digits for goal involvements in eight different seasons. When he returned to England from his spell in Barcelona to join Chelsea in 2014/15, he seemed destined to equal Thierry Henry’s record of 20 assists in a single campaign. He fell short, however, making 18 assists.

Much like Alan Shearer’s record of 260 Premier League goals, Ryan Giggs’ total of 162 assists is a mythical tally unlikely to ever be surpassed.

The Welsh winger was a gifted and superb wide player who could find a man in the box as well as anyone, but the main reason behind his otherworldly assist numbers is longevity.

Giggs featured in every Premier League campaign from its inception up until 2013/14, providing a goal or assist in every season – except for his last one. His personal best came in the title-winning campaign of 1995/96, when he set up 16 goals.

Data via premierleague.com and FBref.

Read: Ranking the Premier League players to score the most goals during the 90s