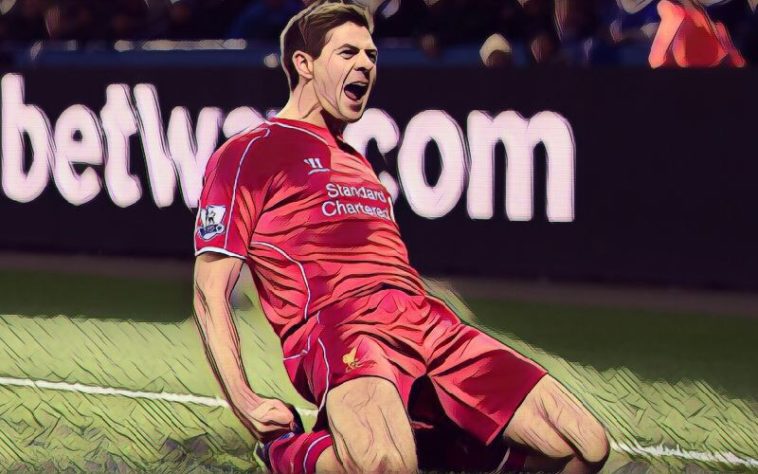 Arguably the greatest player in Liverpool’s long history and a home-grown talent who became the on-field embodiment of the club, Steven Gerrard carried a weight of expectation on his shoulders for much of a distinguished career.

The midfielder represented a symbol of hope despite much mediocrity on Merseyside, his all-action style and tendency to deliver on the biggest of occasions making Gerrard a ‘Roy of the Rovers’ figure for the Reds.

Rarely has any footballer possessed a more complete skill-set than the former Liverpool captain, who amongst his extensive list of attributes developed a reputation for scoring spectacular and often vitally important goals.

We’ve decided to look back at the story of one of the Premier League’s great Golazo Merchants:

Gerrard signed with his boyhood side at the age of nine and swiftly made his way through the academy ranks, overcoming a series of potential setbacks before making his first-team bow against Blackburn as a teenager in 1998 and featuring in a variety of positions including both at right-back and right-wing.

The early version of Gerrard was primarily a defensive-minded player, one who often played the game on the edge and was full-blooded – if occasionally over zealous – in the challenge. It took until the following campaign for him to register his first goal, though a brilliant solo effort against Sheffield Wednesday was an indication of the attacking capabilities within the young Reds’ starlet.

After overcoming persistent back and groin problems as a result of an evident growth spurt, Gerrard enjoyed a true breakthrough campaign during an incredible 2000/01 season for Gerard Houllier’s side.

The young midfielder made 50 appearances in all competitions as Liverpool won a UEFA Cup, FA Cup and League Cup treble, scoring ten goals and being named as the PFA Young Player of the Year.

That season would be the first campaign that football’s wider public became familiar with a Gerrard trademark, the 20-year-old demonstrating an ability to ferociously hit thunderbastards from seemingly any distance.

Amongst Gerrard’s finest came during a New Year’s Day clash with Southampton on Merseyside, where a worse-for-wear Anfield pitch made little difference to the home-grown hero as he let fly to devastating effect.

There appeared little danger when the youngster picked the ball up just past the centre-circle, but after assessing his options Gerrard – by then growing into his role as a first-team star – decided to audaciously try his luck from range.

The result was the sweetest of strikes from all of 30 yards, crashing in off the underside of the crossbar in what would prove to be the start of a special collection of Gerrard goals.

Just three months later and the emerging star was at it again. Arch-rivals Manchester United were the visitors to Merseyside on this occasion, and if the defending champions thought Gerrard’s stunner against the Saints was a stroke of good fortune, they were soon found wholly mistaken.

Liverpool were gaining momentum under the guidance of Houllier and the visit of Sir Alex Ferguson’s Red Devils was an opportunity to put down a marker, with Gerrard taking centre stage to open the scoring.

Robbie Fowler’s cushioned flick found the rampaging midfielder in space mid-way inside the United half, and with the visitor’s defence retreating he sensed an opportunity to have a go. The gifted youngster unleashing a thunderous effort from his trusted right boot, which flew past the helpless Fabien Barthez to lift the roof off a raucous Anfield.

Fowler’s second half goal secured a league double over the reigning champions, though it was Gerrard’s intervention which lives long in the memory of those inside the famous old ground.

Gerrard’s ever-increasing importance to the Liverpool side was rewarded with the club captaincy just two years later, the appointment of the young Scouser seemingly a natural progression given his ability, growing maturity and outward affection for his boyhood side.

Leaders can come in various forms and Gerrard was rarely a captain who shouted or screamed at his teammates, rather leading by example with his fine performances and ability to influence the biggest of occasions.

Few players in the Premier League era have ever carried such pressure or expectations from a fanbase, Gerrard the local lad turned good who made the Liverpool supporters dare to dream. The defining period of his legacy came under the guidance of Rafael Benitez, the Spaniard guiding the club to Champions League and FA Cup success with a side centred around his talismanic number eight.

Gerrard’s Champions League final performance against AC Milan is the stuff of football folklore but it’s his goal against Greek side Olympiakos which began the Reds’ path to glory, a late intervention which ranks firmly amongst his greatest goals.

Liverpool needed to win by a two-goal margin to progress from the group stages, but fell behind on Merseyside courtesy of Rivaldo’s free-kick. Goals from Florent Sinama Pongolle and Neil Mellor put Benitez’s side ahead, but with just minutes remaining the Reds were heading for a European exit.

What happened next was the perfect combination of technique and timing, Gerrard – in a goal which will forever be synonymous with the shriek of joy from former Everton man Andy Gray – hitting an unstoppable half-volley to catapult Liverpool into the Champions League knock-out stages.

Cometh the hour, cometh the man.

? What a hit. Remember this?

By now Premier League defences and the wider footballing public were all too familiar with Gerrard’s powerful precision from distance, with opposition sides wincing in anticipation whenever the midfielder received the ball within range.

The mid-noughties saw the England international at the peak of his powers, providing goals in both quantity and quality, including this sensational strike against Middlesbrough.

The North East outfit had threatened to cause an upset after Szilard Nemeth gave them the lead at Anfield, only for Gerrard – as he would on many occasions – to rescue the Reds in their time of need.

John Arne Riise’s chipped pass found his captain in space, Gerrard’s instant control seeing the ball bounce up invitingly 35-yards from goal. Without hesitation, the midfielder unleashed a rasping half-volley which dipped and swerved into the top corner at the Kop end to spark jubilant celebrations.

Gerrard’s heroics in Liverpool’s European success had drawn him plenty of plaudits, and just a year later he would produce another performance which would forever seal his place amongst the club’s pantheon of all-time greats.

Benitez’s side headed to Cardiff for the FA Cup final as overwhelming favourites against West Ham, but a thrilling topsy-turvy contest threatened a major upset as the Hammers raced into a two-goal lead.

Gerrard provided an assist for Djibril Cisse to pull a goal back before a fierce strike of his own drew the sides level, only for Paul Konchesky’s fortuitous cross-shot to put Alan Pardew’s West Ham back in front at the Millennium Stadium.

Hopes of a fightback had all but faded as stoppage-time approached, Liverpool’s Captain Fantastic stricken with cramp and exhausted on a sun-soaked afternoon in South Wales. As the stadium PA announced an additional four minutes added time, Gerrard was presented with a bouncing ball following a half-clearance from the West Ham backline.

Few players would have dreamt about hitting the ball from that distance, fewer still are capable of producing a goal which sits as arguably the very best in FA Cup final history.

The outstretched glove of Shaka Hislop’s despairing dive was deemed utterly redundant as Gerrard lashed home the most dramatic of equalisers, his match-saving intervention forcing extra-time as Liverpool lifted the trophy on penalties following a cup final classic in Cardiff.

Long-range stunners against the likes of Aston Villa and Newcastle also rank proudly amongst an almost unmatched list of thunderbastards, Gerrard a player few would back against when winding one up from outside the area.

Playground players across the country will still yell ‘Gerrard!’ ahead of striking a ball from range, though it is perhaps difficult to envisage many will hit a strike with similar venom and velocity to the Liverpool legend.

The Merseyside club pinned their hopes on the Huyton hero with a hammer of a right boot for nearly two decades, and for the most part he delivered. Steven Gerrard was ‘Mr. Liverpool’ for almost the entirety of his career and a player who sits amongst the Premier League’s greatest Golazo Merchants.