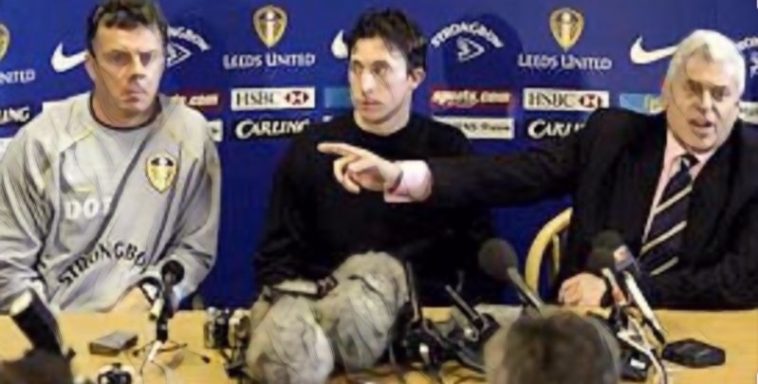 Ten minutes had elapsed during a tight second half at The Valley, when Gary McAllister’s in-swinging near post corner was only feebly cleared by Sasa Ilic. The resulting ball dropped perfectly for Robbie Fowler, who, with his back to goal nonchalantly sent a half volley over his shoulder that looped into the goal over a sea of players in the crowded penalty area.

The goal sent Liverpool on their way to a comfortable 0-4 victory over Charlton Athletic on the final day of the 2000/01 season; the result secured them the third and final Champions League qualification place.

The Reds had capped off a memorable season in style but their success would send shock waves reverberating up north, where they were felt with trepidation in West Yorkshire.

Leeds United had only missed the boat by a single one point that year. Fourth place meant European football once again as well as a third consecutive finish in the Premier League‘s top four. However, their failure to secure Champions League football would set off some early warning systems at board room level as well as a whole lot of angry red ink on the company balance sheets.

Despite their improved domestic fortunes and white knuckle dash to the Champions League semi-finals in 2001, behind the scenes, the club’s success was financed by a toxic coupling of securitized debt and a sale-to-lease transfer framework.

Supporters would not come to understand the full extent of the club’s financial horror show until 2003, but the seeds were sown as early as 1998/99 when lifelong supporter Peter Ridsdale took full control as chairman.

Having witnessed the show stopping success of Manchester United well as the emergence of Arsenal under Arsene Wenger; Ridsdale wanted in on the action. Leeds was a club embalmed in history and equipped with a vociferous army of supporters who yearned for the restoration of their glory days. They were primed for success and Ridsdale wanted to propel them to dizzying new heights.

Bold transfer spending in the late 1990’s was designed to furnish new manager David O’Leary with a competitive squad that could sustain Champions League football. Almost £16 million was spent on Danny Mills, Erik Bakke, Micheal Dubbery and Micheal Bridges ahead of 1999/2000. This may not seem like a lavish outlay given today’s bloated figures, so for some context, the club’s total revenue for 1998-99 was just over £37 million and more than 40% of that was going on transfer fees alone.

Leeds would opt into a scheme whereby various financial institutions would lend them the sum for a new signing, with the club paying them back over the period of the player’s contract, naturally with above average interest rates.

In effect, this was a sale-to-lease mechanism that would leave the club out of pocket if, for whatever the reason, the player’s value declined and he was sold at a loss; Leeds would owe whatever difference to the lender.

Using this scheme, a 21-year-old Rio Ferdinand was signed for a British record £18 million in 2000. In addition, Dominic Matteo, Olivier Dacourt and Mark Viduka were added in a further splurge of £17.45 million as Leeds became one of the most feared and exciting teams in the country.

Off the field Ridsdale had also been busy securing the biggest loan ever raised by an English football club at the time. A staggering £60 million securitization loan was taken out with repayments over 25 years. The Leeds chairman had secured this based on the assumption that they would continue to enjoy rising gates, increased season ticket purchases, and of course the golden goose; Champions League football.

With their wonderful squad, oozing confidence and enhanced status in the game, few would have backed against Leeds making a sustained title challenge. However, 2001/02 ended with a fifth place finish, high profile problems off the field and the summer sacking of O’Leary. Worse was to come. Much worse.

A net debt of £82 million was strangling the club after their Champions League gamble failed in successive seasons. As Terry Venables was parachuted in, it was clear that a fire sale of players was required to ease their ailing financial condition. A mass exodus of playing staff ensued as Leeds tumbled town the table in 2002/03, narrowly avoiding the drop on the final day of the season.

By the time they published their books in 2003, Leeds posted net losses totalling £49.5 million; the biggest ever recorded by a British team. The football fraternity recoiled in shock as one of the game’s biggest intuitions was on the brink of bankruptcy.

What makes the tale of Leeds financial implosion so extraordinary is its speed, timing and cavernous scale. The 2002/03 season marked a decade of success and growth for the Premier League. Clubs had been exposed to greater revenue from an ever expanding TV rights deal. Revenues had grown year on year like clockwork and new foreign players added a sheen of technical brilliance. In short, it was a stellar success story and a triumph of bold nineties capitalism.

And yet here was one of the biggest football clubs in the land brought down and left completely exposed by reckless spending and naive borrowing. Generous TV and prize money payments entitled to them barely permeated their spiralling debts and uncontrolled wage bill.

Bill Gerrard, a local economist at Leeds business school as well as a passionate fan and vocal critic of the Ridsdale regime was left shaken when he saw the club’s books: “I calculated then that they were going to need to find £40m to keep trading. In fact, I was wrong: they needed £50m.”

The timing of the financial disaster also collided with the introduction of transfer windows, which sadly, only exacerbated things further. The Whites had to navigate through a window of stagnant prices and brinkmanship from rival clubs wise to their plight.

Star players like Jonathan Woodgate, Lee Bowyer and Harry Kewell were sold for way below their true value as insult was added to injury. And coupled with all of this was the public humiliation endured by the supporters.

This was an era when 24-hour news coverage captured the drama in full technicolour. Big clubs had faced financial peril in the past, with Wolverhampton Wanderers dropping to the fourth tier of English football in the 1980s. But here was a giant of English football who had been on the cusp of a Champions League final just a few seasons before, on the brink of bankruptcy.

It was open season as far as the media were concerned; they wanted to capture every morsel of it. This culminated in the excruciating lengthy press conference given by Ridsdale, who sat alongside a bewildered and visibly fatigued Venables as he pleaded for understanding in the wake of Woodgate’s contentious departure to Newcastle United.

It was then that Ridsdale quipped the now infamous line that they had “lived the dream”. Sadly for Leeds United, their dream had morphed into a stark cautionary tale for the rest of the Premier League to ward off against greed, reckless spending and naive borrowing.

As Simon Jose, the co-founder of Leeds’ independent fan’s association put it at the time, the directors “played Russian roulette with the club…and they have ended up losing big style.”

Leeds implosion marks a moment when the Premier League lost its financial innocence and its gravy train thrill ride stalled somewhat to jettison a member club that was beyond saving.

Ridsdale had exposed a proud football institution to the dire perils that come when all-conquering greed meets unsustainable ambition. If this could happen to such a big club, then surely others were not immune from a debt-fueled crisis.

Still in a tailspin and saddled with huge debt Leeds were relegated in 2004 and the Premier League lost one of its truly great football clubs. The financial reckoning that started in South London in May 2001 would continue to send violent aftershocks long into a turbulent, unhappy future in West Yorkshire.

Read – Moments that made the Premier League: Chelsea’s “Foreign Legion” arrives on the South Coast