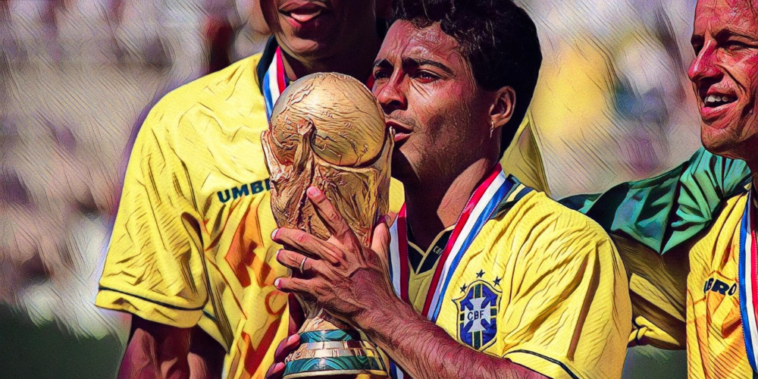 It was a World Cup which saw ‘soccer’ make its mark on America, with fine football, high attendances and infamous missed penalties to start and finish the tournament from Roberto Baggio and er… Diana Ross.

Brazil were crowned champions after beating Italy in the first final decided by a shootout and with the 2022 edition already in full flow in Qatar, we’ve decided to look back at the stars who lit up USA ’94.

Here are five of the most iconic players from the 1994 World Cup.

Brazil were crowned world champions for a fourth time in the United States, as the Selecao ended a 24-year wait for World Cup success.

The achievement of Carlos Alberto Parreira’s side was built on the formidable talents of Romario, who was named as the tournament’s finest footballer. Romario had been in danger of missing the World Cup after a fallout with Parreira, but was recalled for a crucial final qualifier against Uruguay in which he scored both goals in a 2-0 win to secure Brazil’s place in the States.

He arrived in the USA having scored 30 goals in 33 league games during a stunning season at Barcelona and continued that form into the World Cup. He scored in each of Brazil’s group games, before netting the opener in a thrilling quarter-final win over the Netherlands.

Romario’s fifth goal – a trademark toe-poked finish – decided the semi-final meeting with Sweden and he was deservedly named as winner of the World Cup’s Golden Ball. He remains the last player to have won the Golden Ball and World Cup in the same tournament.

The defining image of Baggio’s tournament is an unfair reflection on his contribution to the cause, with his wild penalty – blazed high over the crossbar at Pasadena’s Rose Bowl – condemning Italy to defeat in the final.

It was a harsh moment for Baggio, whose performances were the leading reason behind the Azzurri’s success at the tournament. Baggio underlined his status as one of the game’s greats with a brilliant individual tournament, one which saw him score five goals.

Each of Baggio’s goals came in the knockout rounds as he scored decisive winners against Nigeria, Spain and Bulgaria to book Italy’s place in the final.

Il Divin Codino’s (The Divine Ponytail) tournament ended with that horror moment, but throughout USA ’94 he was wonderful, a genius of skill and shimmies who made even the most straightforward of acts well worth watching.

Hristo Stoichkov was the leading light of Bulgaria’s Golden Generation, a team that had been tipped to surprise but exceeded all expectations in reaching the World Cup’s last four.

Stoichkov was the star of the show after a brilliant season at Barcelona, in which ‘The Dagger’ had been among the sharpest tools in the armoury of Johan Cruyff’s Dream Team at the Camp Nou.

In the United States, the brilliant Bulgarian reached his peak, as he finished as the competition’s joint-leading scorer to win the Golden Boot.

🔙 #OnThisDay in 1994, however, Stoichkov's free-kick and Letchkov's header saw them stun defending champions Germany in a Giants Stadium quarter-final ✅@Team_Bulgariapic.twitter.com/gZM1jflfYU

He scored against Mexico, Germany and Italy in the knockout rounds alone, sharing the top scorer accolade with Russia’s Oleg Salenko in a tournament which propelled him toward the 1994 Ballon d’Or.

The upset of defending champions Germany remains one his nation’s greatest games, with Stoichkov scoring the equaliser as the Bulgarians came from behind to dump out the holders.

Paolo Maldini became one of the great defenders of all time during a long career with Italy, in which the closest he came to international honours was at USA ’94.

Maldini – who had helped AC Milan to Champions League success before heading to the States – was an ever-present part of the Azzurri team that reached the final, operating at both full-back and centre-back in an unsettled side that had Franco Baresi, Mauro Tassotti and Alessandro Costacurta missing for various stages of the tournament.

His performance was crucial in the goalless draw with Brazil in the final, before Italy fell to defeat following a penalty shootout.

Maldini was named in the Team of the Tournament for a second successive World Cup, 32 years after his father Cesare had been named in the best XI from the 1962 tournament. Maldini ended 1994 in third during the vote for the Ballon d’Or.

Gheorghe Hagi inspired Romania to their best-ever World Cup finish in 1994. Romania reached the last eight in the United States and owed much of that success to Hagi, a man nicknamed ‘the Maradona of the Carpathians’.

Hagi was the star of the show as Romania opened the tournament with a 3-1 win over Colombia, in which he provided two assists and scored one of the World Cup’s most memorable goals with an outrageous 40-yard lob from near the touchline.

🤔 With anyone else, it would have been fair to ask if it was a cross.

🪄 With Gheorghe Hagi and that wand of a left foot, the intention and execution was never in doubt.

🙋 Who remembers this #WorldCup wonder goal, scored #OnThisDay in 1994? pic.twitter.com/eweRxIxXbT

He scored three goals during the finals, including another goal as Romania knocked out Argentina – runners-up four years earlier – in the last 16.

His World Cup performances were enough to earn Hagi a second shot at a Spanish superpower, with Barcelona securing his signing from Brescia following a memorable tournament.