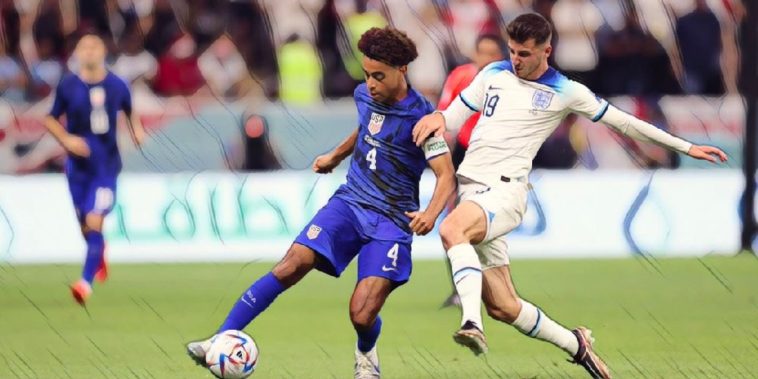 Gareth Southgate admitted England lacked zip and quality in the final third as they were held to a 0-0 draw against USA on Friday night.

Optimism had risen following their clinical 6-2 demolition of Iran on matchday 1, but English fans were given a taste of reality as they were second best to an energetic American team who had chances to win the game, Christian Pulisic coming closest as he crashed an effort off the bar.

England looked ponderous in possession and were lacking runners, with the Three Lions rarely testing Arsenal’s Matt Turner between the sticks for the USA.

At the full time whistle, there were audible boos around the Al Bayt stadium, though Gareth Southgate felt they weren’t aimed at his players who he praised for their ‘application’, but admitted they were lacking in the final third.

“Were we booed off though? I’m not sure if that was aimed at us, I do not know, but look personally I’m really pleased with the application of the players, it was a really tough opponent, they defended incredibly well,” said Southgate in his post-match press conference.

“To come off the high of the performance the other day and find that same energy, level of quality was always going to be a challenge. Their front six make it so difficult to play through and get at their defence and I thought we actually controlled the game really well.

“Our two centre backs were absolutely outstanding with the ball, to play with such composure against the sort of pressure and angles that the USA team press with is unbelievably difficult. And it is only when you have two players like we have that you really appreciate the strain of the game they can take.

“Yes, we lacked a little bit of zip and quality in the final third and we were not able to open up to create really good chances, but we had to show another side of ourselves in terms of the resilience without the ball, the recovery runs, defending our box well, defending any number of corners and set plays that came in.”

Despite the disappointment, Iran’s late win over Wales means that England are firmly in the driving seat to progress to the knockout stages, and only need to avoid defeat by four goals to prevent missing out on the last 16.

“To be a successful team in a tournament, you have got to show those different faces and I think we did that tonight and I am sure there will be a lot of noise about the performance, but not many teams go through World Cups and get nine points in the group,” he added.

“We are in a good position, we have a little bit more to do to qualify still, but we also have the opportunity to win the group, so for me the players were very down and disappointed after the game, but I told them that is not how it is going to be for the next few days because I thought they showed another side to what they are about and it is going to be important going forward.”