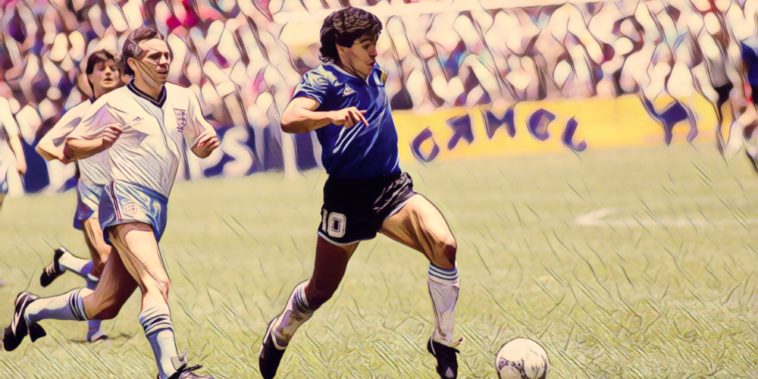 The 2022 World Cup is fast approaching and the world will soon stop to watch as football’s biggest global event returns in Qatar this winter.

Fans from countries across the planet will tune in as the world’s best international teams compete to be crowned champions, in what will be the first ever tournament staged both in the winter and the Middle East.

Throughout the decades there have been some unforgettable World Cup moments, goals and matches that have been watched by millions of fanatical fans.

We’ve decided to look back at the five most viewed World Cup goals of all time, the top five strikes which have been the most replayed since first finding the net. All figures are according to the original article on ticket-compare.com.

Robin van Persie scored one of the great goals from the 2014 World Cup, netting a phenomenal flying header to equalise against Spain in the group stage.

Spain arrived at the tournament on a run of unprecedented international dominance, having won three consecutive major tournaments before the 2014 World Cup in Brazil.

Xabi Alonso’s penalty had given the world champions the lead, before Van Persie’s moment of brilliance levelled the scores and changed the complexion of the clash.

Daley Blind’s long pass was met by the flying Dutchman, who threw himself through the air to meet the ball and guide home a diving header.

Van Persie added a second as the Netherlands ran riot in a sensational second-half performance, ending the game as 5-1 winners to humiliate the holders at a stunned Arena Fonte Nova.

France and Argentina played out a classic contest during the 2018 World Cup in Russia, with the former edging a thrilling contest 4-3 to reach the quarter-finals.

Among the highlights of an entertaining end-to-end clash was a stunning strike from Benjamin Pavard, who scored his first international goal with a sweet sliced effort from the edge of the area.

The contract was near flawless as the right-back cut across the ball with intent, sending his effort on a wonderful arc into the far corner.

This Benjamin Pavard strike will forever be iconic ☄️

The goal helped France into the last eight as Les Bleus went all the way in Russia to be crowned world champions for a second time.

In the final seconds of the Netherlands quarter-final clash with Argentina, the former Arsenal forward took three sublime touches to send the Oranje into the last four.

As a tense tie headed towards extra-time, Bergkamp proved the match-winner in magical fashion, producing a touch and finish so good it’s still celebrated more than two decades later.

Frank de Boer’s raking pass was plucked from the sky as only Bergkamp truly could, before a second touch embarrassed the retreating Roberto Ayala and presented the forward with a shooting chance.

Dennis Bergkamp's knack for making goalscoring look easy was on full display when he fired @OnsOranje into the #WorldCup semi-finals #onthisday in 1998 🇳🇱 pic.twitter.com/akVInsbTT7

His third smashed home a dramatic winner with the outside of his right boot, sparking wild celebrations from the travelling Dutch packed inside Marseille’s Stade Vélodrome.

For a man who compiled quite the catalogue of special strikes, this was right up there with the very best.

For some, Diego Maradona remains the greatest talent the game has seen and few goals demonstrated the brilliance of the Argentine better than this effort against England.

Maradona took the quarter-final clash with the Three Lions by the scruff of its neck, including scoring a sensational solo goal dubbed the ‘Goal of the Century’.

Beginning inside his own half, the fantastic footwork and sharp acceleration of Maradona were all on show as he burst past five England defenders before rolling the ball home.

On this day in 1986, Diego Maradona scored one of the greatest goals ever witnessed at the World Cup 🇦🇷

A strike so good, it almost received applause from the opposition.

“The pitch was awful, every time you put your foot on a bit of turf, it just disappeared,” the former England striker Gary Lineker recalled on BT Sport.

“To do that little pivot he did on the half-way line and to go past the players like they were not there, was just the most remarkable thing.

“It is the closest in my life that I have ever felt like I ought to applaud someone else scoring a goal. Obviously I didn’t because you would be destroyed back home. He was head and shoulders the best player of my generation.”

Maradona’s stunning strike against England sealed a 2-1 win for Argentina in 1986, but his first goal is arguably more memorable – for all the wrong reasons.

Maradona opened the scoring with his infamous ‘Hand of God’ goal, as the diminutive midfielder rose above Peter Shilton to score with his hand, an illegitimate goal that was missed by the officials.

We remember Maradona’s historic goals against England in the 1986 World Cup. 🏆🇦🇷 pic.twitter.com/3mNrKvcpAG

He later called the goal ‘symbolic revenge’ for the Falklands War between Argentina and England four years before their quarter-final clash in Mexico, in what remains one of the most infamous moments in World Cup history.