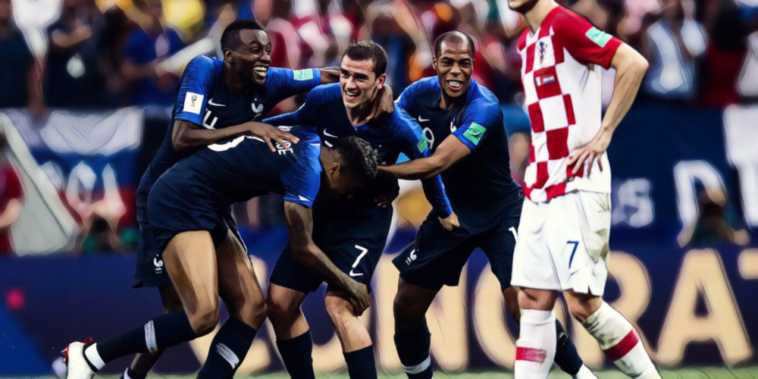 France were crowned world champions for a second time in 2018, as Didier Deschamps’ talented team conquered all to win the World Cup in Russia.

It was Les Bleus’ second triumph after winning the World Cup on home soil two decades earlier, with France beating Croatia 4-2 in the highest-scoring final since 1966.

We remember the France XI that won the 2018 World Cup.

Hugo Lloris captained France to success in Russia, with the goalkeeper following in the footsteps of head coach Didier Deschamps in lifting the World Cup trophy for Les Bleus.

An experienced part of the squad, he earned his 100th cap during the group stage win over Peru and kept four clean sheets during the run to the final. Lloris’ calamitous late mistake allowed Mario Mandzukic to score for Croatia in the final, though it proved little more than a consolation as France were crowned champions.

He remains captain of the current squad and could pass Lilian Thuram as France’s most capped player during the 2022 World Cup in Qatar.

Benjamin Pavard was among the least experienced of France’s options at the 2018 World Cup, having earned just six caps before Russia. He started all but one of Les Bleus’ fixtures however, and scored his first international goal during the thrilling 4-3 win over Argentina in the last 16.

Pavard’s goal was a special strike as he sliced in a brilliant effort from the edge of the area, with his goal later named as the best of the World Cup.

He signed for Bayern Munich from Stuttgart in 2019 and has since won three Bundesliga titles and the Champions League with the Bundesliga giants.

Having been nominated for the Best Young Player award at the 2014 World Cup, Raphael Varane played every minute of France’s victorious campaign in Russia.

Varane starred for Les Bleus at the finals and opened the scoring in the 2-0 quarter-final win over Uruguay. Having won the Champions League with Real Madrid the previous season, he became just the fifth player to win the World Cup and Champions League in the same year.

The centre-back won four Champions League titles at Real Madrid, before a move to Manchester United in 2021. He has won 87 caps for France to date, scoring five goals.

Samuel Umtiti partnered Varane at centre-back and scored a crucial goal of his own with the semi-final winner against Belgium.

Having been part of the team that won the u-20 World Cup with France in 2013, he made his senior breakthrough at Euro 2016 before impressing as Les Bleus were crowned world champions in Russia.

His career has taken a sharp decline since that triumph however, with Umtiti ravaged with injury issues at Barcelona. Umtiti has made just 30 league starts for Barcelona in the four-and-a-half seasons since France’s World Cup success and is currently on loan at Italian side Lecce.

None of the starting side had less caps than Hernandez when the tournament started, with the full-back having only made his senior debut in March 2018.

He was ever-present in Russia however, featuring in all seven games as France won the World Cup. At club level, he signed for Bayern Munich in a Bundesliga record €80m deal in 2019 and has since won four consecutive titles with the German giants. He formed part of the side that won a continental treble during his debut campaign.

Hernandez – who set up the fourth goal in the final win over Croatia – has remained a regular with France and has earned 33 caps, though saw his 2022 World Cup campaign prematurely ended after sustaining a knee injury in Les Bleus’ opening fixture.

Pogba had impressed at the 2014 World Cup to be named as the finals’ Best Young Player, before returning to the world stage in Russia as a more mature midfielder.

His effort deflected off Aziz Behich for a group stage winner against Australia, before he found the net in the final win over Croatia. After a slow start to the game he came to the fore in the final, slamming home France’s third goal to put Deschamps’ side in control.

The 29-year-old – who returned to Juventus from Manchester United last summer – was ruled out of the 2022 World Cup with a knee injury. He has won 91 caps for France, scoring 11 goals.

N’Golo Kante was an integral part of France’s success, in a continuation of his meteoric rise. Having been signed as a relative unknown from Caens, Kante rose to prominence after he helped Leicester to a stunning Premier League title triumph in 2015/16.

That summer he signed for Chelsea and repeated the feat with a second successive Premier League crown, earning the PFA Player of the Year Award. Just five seasons after he was representing US Boulogne in France’s third tier, Kante was a world champion with his industrious performances at the centre of France’s success.

Kante was, however, below-par in the final win. He was substituted after just 54 minutes after struggling to get to grips with Croatia’s midfield, with Steven Nzonzi introduced as his replacement.

Kylian Mbappe made history in Russia, as he became the first teenager since Pele in 1958 to score in a World Cup final.

It was the culmination of a brilliant tournament for Mbappe, one which saw him score four goals to be named as the World Cup’s Best Young Player.

Mbappe’s best performance came in the last-16 win over Argentina, in which he scored twice and terrified the South Americans with his electric pace. He has since developed into arguably the most decisive footballer in the game, having finished as Ligue 1’s leading scorer in four consecutive campaigns.

GOAL! Teenage sensation Mbappe picks the ball up 25 yards out and unleashes a pinpoint strike low into the bottom corner pic.twitter.com/cw6PkmgY5p

He has 29 goals in 60 appearances for France and opened his account at the 2022 World Cup with a header against Australia.

Blaise Matuidi brought balance to the France side in an unfamiliar role from the left, where his work-rate and tactical intelligence were crucial for the world champions.

He won 84 caps for France, but has not been called up for the national side since 2019. The 35-year-old is currently playing his club football in MLS with Inter Miami.

Matuidi – who was substituted in the final for Corentin Tolisso – signed for the American outfit in 2020, having won seven league titles across spells with Paris Saint-Germain and Juventus.

Antoine Griezmann starred as France reached the final of Euro 2016 on home soil, having scored six goals to finish as the tournament’s leading scorer.

He delivered again at the World Cup two years later, as he ended the tournament as runner-up for the Golden Boot and produced a man-of-the-match performance in the final win over Croatia.

Griezmann was instrumental during the run to the final, as he scored three goals and provided two assists. In the decider, his free-kick led to the opening goal, before he scored France’s second goal from the spot.

GOAL! Griezmann puts France ahead from the spot after a VAR review rules Perisic handled in the box pic.twitter.com/nbdysGKmMG

The forward was named as winner of the Bronze Ball, awarded to the third-best player at the tournament. He finished behind Luka Modric and Eden Hazard in the voting.

At club level, he returned to Atletico Madrid last season after a disappointing spell at Barcelona. He remains a part of the current France squad, where he trails only Thierry Henry and Olivier Giroud on the all-time list for goals.

Olivier Giroud failed to score during France’s triumphant World Cup campaign, but his physical presence, work-rate and link-play were a major part of the side’s success.

Giroud’s leading of the line allowed the likes of Griezmann and Mbappe to flourish, with his selfless contribution resulting in a World Cup winners’ medal. He worked tirelessly in the final before being substituted for Nabil Fekir with nine minutes remaining.

Despite being largely under-appreciated during his career, Giroud has won 115 caps for France and has scored a record-breaking 51 goals (level with Thierry Henry as Les Bleus’ record goalscorer).

The 36-year-old continues to age like a fine wine and scored twice as France began the defence of their crown with a 4-1 win over Australia.