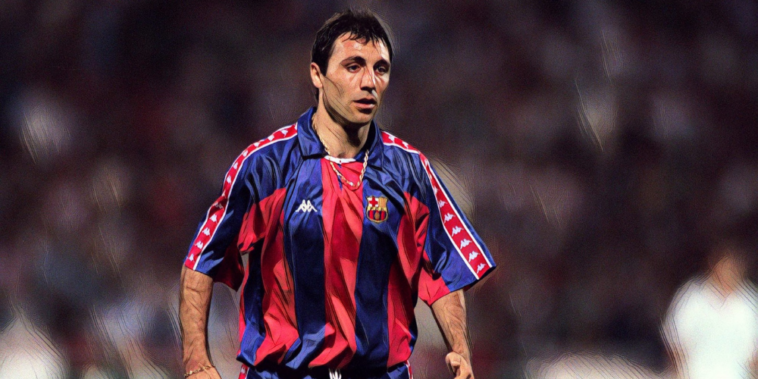 The art of unpredictability can be a potent weapon for forwards. Hristo Stoichkov had it in abundance. Stoichkov was so utterly unpredictable that those watching on – and attempting to stop the brilliant Bulgarian – had little idea whether he’d conjure something quite magic, or make a game unforgettable for the entirely wrong reasons.

Stoichkov, in every sense of the word, was a maverick. Explosive and exciting, he was world football’s equivalent to a bubbling volcano, whose eruptions consisted of glorious goals and moments of outright controversy.

Bulgaria’s best and the jewel in a Catalan crown, he became The Dagger of Johan Cruyff’s fabled Dream Team in Barcelona.

His career began at FC Hebar, before a move to the nation’s most successful club, CSKA Sofia, hastened his rise to European football royalty.

Stoichkov became Bulgaria’s greatest ever footballer, but his career was almost over before it had really began. He was banned from the sport for life just months after his arrival in Sofia, for his role in a mass brawl during the 1985 Bulgarian Cup final.

Such was the fracas that ensured between CSKA and rivals Levski Sofia, both teams were disbanded, though the punishments were later reduced including the lifetime ban for Stoichkov, who returned to the side after several months of suspension.

It has been a disastrous end to his debut season, but the teenager returned and over the following three seasons developed into the nation’s finest footballer.

He fired CSKA Sofia to three league titles in just four seasons, the third of which saw the forward claim the European Golden Boot. Stoichkov scored 38 goals in just 30 league appearances for the club during the 1989/90 campaign, form which attracted sizeable interest from across Europe.

Johan Cruyff had been tasked with bringing Barcelona back to the summit of Spanish football, with the Catalans having won just one title in the previous 16 seasons.

Real Madrid had dominated in the five seasons that pre-dated Stoichkov’s arrival at the Camp Nou, but the import from Eastern Europe starred as Barcelona ended their wait for a La Liga crown.

His first season, in typical Stoichkov fashion, was not without unwanted incident, however, including a two-month suspension for stamping on the referees’ foot during an El Clásico encounter in the Spanish Super Cup.

Not all had seen Cruyff’s vision when it came to Stoichkov in the infancy of his career with the club, a footballer who played a little more than on the edge.

Rarely seen without a furrowed brow, he was the hand grenade who was as simultaneously capable of blowing apart defences as he was self-destructing.

Cruyff’s faith, however, was both unwavering and justified.

Thriving from the ammunition provided by Michael Laudrup, the Bulgarian led the line in a formidable Barcelona attack, pressing from the front and delighting the Camp Nou with his improvised brilliance.

He was all-action and audacious, both direct and devastating. Never needing a second invitation to shoot, his goals also propelled Barcelona through the European Cup. Sampdoria awaited in the final at Wembley, where Ronald Koeman’s free-kick crowned the Catalans champions of Europe for the first time.

Barcelona’s dominance continued with another league title in 1992/93, before that summer saw one of the club’s most potent partnerships formed.

Romario’s arrival from PSV Eindhoven brought together the best from Brazil and Bulgaria, a devastating combination that produced some of the finest football of the Dream Team era.

Bringing a unique brand of rock and roll football to Catalonia, the duo scored 55 goals between them as Barcelona finished as champions for the fourth consecutive campaign, snatching the title on the final day from Deportivo La Coruna.

The partnership between Romario and Stoichkov had flourished, when at first it had appeared set to end in disaster. The friction most had predicted as two outspoken egos collided in the same dressing room had instead led to sparks on the pitch.

Stoichkov, the talented Balkan bull, and Romario, the South American superstar who changed perceptions on how number nines operate. It was, in talent terms, a match made in heaven.

Their partnership, whilst at times almost incomparable, was an all too brief affair.

The cracks perhaps first showed during Barcelona’s shock defeat in the 1994 Champions League final, in which Cruyff’s charges were battered 4-0 in Athens by an AC Milan side missing a wealth of key figures.

The Spanish champions had headed into the showpiece as huge favourites, but were humbled in comprehensive fashion in the Greek capital.

That summer, before the finest forwards in world football began to take differing paths, came the World Cup finals in the United States and it was a tournament in which the pair reached a zenith.

Romario was named as the finals’ best player after inspiring Brazil to success, whilst Stoichkov finished as the tournament’s joint-leading scorer during Bulgaria’s run to the semi-finals.

Bulgaria had been tipped as ones to watch – largely in thanks to the sensational Stoichkov – and exceeded all expectations to reach the last four, with their tempestuous talisman in inspired form.

He scored against Mexico, Germany and Italy in the knockout rounds alone, sharing the Golden Boot with Russia’s Oleg Salenko and emphasising his status as one of the world football’s premier players.

The Ballon d’Or was a fitting honour for Stoichkov’s season of sublime success.

Back at club level, however, and Barcelona’s era of greatness began to crumble. Laudrup defected to Real Madrid, whilst Romario’s extravagant lifestyle and penchant for partying posed further problems as he packed his bags for Brazil soon after.

Stoichkov soon followed his former teammates out of the exit door and signed for Parma, but failed to recapture his finest form in Serie A before returning to the Camp Nou.

His second spell – despite winning the UEFA Cup Winners’ Cup in 1997 – was less successful and the remainder of his career was nomadic as spells at clubs including Al Nassr, Kashiwa Reysol, Chicago Fire and DC United followed before the curtain call on Bulgaria’s finest footballing export.

Not one to bow out quietly, his brief spell in the US included an all-too-common controversy following a challenge on a youth player at DC United that left the recipient with a broken leg.

It was another low point in a career that often mixed the wild with the wondrous.

The memories of Stoichkov remain vivid, not least that unforgettable period in Barcelona. He remains a fondly remembered figure amongst the La Blaugrana, the ferocity of his will to win resonating with the Camp Nou masses.

Armed with an attacking arsenal that included flawless close control and a left foot that burst the back of the net, he was captivating and chaotic at the same time.

His finishing was deadly and his temper even more so. Earning the nickname of The Dagger, it was a fitting label to carry.

Stoichkov was sharp, cutting and a man you often wanted to stay on the right side of.