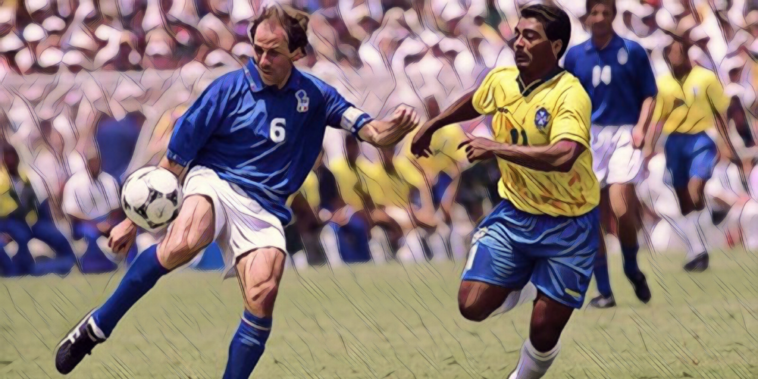 “Reject your sense of injury and the injury itself disappears”

These are the words of the great Roman philosopher and last of the ‘good emperors’, Marcus Aurelius. He may be dead almost two thousand years, but the guy would have made a fine sports psychologist. Looking back at football’s most iconic examples of mind over matter, his sentiments still ring true.

Despite breaking his clavicle in the 1970 World Cup semi-final Franz Beckenbauer continued to play and, with his arm in a crude sling, produced a masterful performance. Archetypal English hard men Terry Butcher and Stuart Pearce were wounded in battle – the former left with a bloodied head and the latter with a broken leg – but soldiered on regardless.

The Italian’s inspiring life story reads a lot like a feel-good Hollywood biopic – but without the predictable gratifying ending. Orphaned at a young age, the tragic death of his parents left a young Franco, his two sisters and older brother Giuseppe to fend for themselves. The Baresi boys, both talented athletes, found their salvation on the football pitch.

Giuseppe was on the books at Inter Milan when Franco, two years his junior, was offered a trial. He was promptly rejected by Inter, with the Nerazzurri citing concerns over his underdeveloped physique. Undeterred, Franco (henceforth referred to simply as Baresi) sought a trial with fierce city rivals AC. Seven hundred matches, six Scudettos and three European Cups later – Inter’s loss was Milan’s considerable gain.

Baresi, affectionately nicknamed ‘Piscinin’ (little one), was a robust but graceful defender – as fearless in the tackle as he was comfortable in possession. His reputation as one of the finest proponents of the ‘Libero’ position brought him to prominence, but his reading of the game truly set him apart.

Like Beckenbauer before him Baresi possessed an innate foresight. In the blink of an eye he would calculate each variable, evaluate every permutation and, more often than not, arrive at the correct decision. Baresi reflected on his intuitive ability, saying, “Of course you can improve it, you can grow with experience – but it is one of those natural gifts.”

As unparalleled as his domestic success was Baresi’s international career had been anything but glittering. Although he was part of Enzo Bearzot’s squad that won at Spain ‘82 he failed to make an appearance at the tournament. A hollow victory indeed. Bearzot axed the Milanista from the Mexico ‘86 squad, before Azeglio Vicini recalled him to the international fold for Italia ‘90.

The Azzurri shone on home soil. Baresi, Paulo Maldini and Golden Boot winner Salvatore Schillaci were all voted in the team of the tournament. The accolade came as scant consolation in light of their crushing semi-final exit at the hands of Diego Maradona’s Argentina. Their penalty shoot-out loss on that balmy evening in Naples became a painful source of national regret.

Two years later Italy failed to qualify for Euro ‘92 and a battle-weary Baresi, with much contrition, called time on his international career.

Historians estimate that the age of Roman gladiators was between 20 and 35-years-old, with a life expectancy of far fewer than 10 gladiatorial bouts. Nevertheless, the lure of immortality and the spoils of victory enticed them to battle time and again.

When the call to arms for USA ‘94 came Baresi, now in the twilight of his career, was powerless to refuse – the caveat of captaincy proving too great a seduction. Alongside goalkeeper Gianluca Pagliuca and his Milan teammates Alessandro Costacurta and Maldini, Italy boasted a formidable defensive unit.

Despite their abounding defensive talents Sacchi’s side began the tournament with a shock defeat to the Republic of Ireland. In their next match, against Norway, their tournament hung in the balance. In the baking heat of New Jersey’s Giants Stadium the Azzurri’s hopes seemed to melt away.

Pagliuaca’s dismissal in the first half was compounded by a catastrophic knee injury to Baresi in the second. The hardened Italian warhorse tried to push through the pain, but grudgingly succumbed to its intensity. As he hobbled over to the sideline, wincing all the while, he knew it was serious.

The prognosis was grim. He had torn his meniscus and would require surgery. His race had been run.

Both the Milan and Azzurri doctors were in agreement – he should return to Italy, undergo the operation and rest-up in time for the domestic campaign. Baresi, intent on a more distinguished swansong, demanded the operation take place immediately.

The 34-year-old underwent the procedure and promptly began rehabilitation. Even with advancements in modern medicine the rehab period for such an injury is approximately 3 to 6 months. Baresi recovered in just 24 days.

In the absence of their skipper the Azzurri found a new talisman within their ranks. After scraping through the group stages Roberto ‘The Divine Ponytail’ Baggio – a devout Buddhist – carried his side to the final almost single-handedly. Buddha had taught him to “do good – and to do it again and again”. Brother Baggio, who scored five goals en route to the final, was an attentive student.

Miraculously, Baresi returned just in time for Italy’s mouthwatering clash with Carlos Alberto Parreira’s Brazil. The Seleção had endured a turbulent path to the final but remained a dangerous outfit. The diminutive strike partnership of Bebeto and Romário, the marauding duo of Dunga and Mauro Silva, Aldair and Cláudio Taffarel in defence – there was a strong backbone to this team.

Any concerns about Baresi’s fitness were quickly assuaged. From the outset the wily veteran stifled Brazilian creativity. His reading of the game was otherworldly, intercepting through-balls and closing down every avenue of approach. Wherever the Brazilian threaded their needles, il capitano was there to plug the eye. All the instincts he had honed over his exceptional career were there to behold.

One of the greatest center-back displays of all-time, Franco Baresi in 1994 World Cup Final. pic.twitter.com/o2J3cnkU4Z

With Romario (the player of the tournament) firmly in his pocket and cutting a frustrated figure, Pasadena’s Rose Bowl became Baresi’s amphitheatre. Snuffing out attack after attack, he found himself in possession with regularity. He played incisive passes through the midfield lines, initiated attacks and burst out of defence with a vigour that belied his age.

In truth, the final was a poor spectacle. The heat of the California sun sapped the energy out of players who had already endured an utterly gruelling tournament. At half time midfielder Roberto Donadoni commented, “if we go up field we’re not going to be able to get back.”

A dour goalless draw petered out into a penalty shoot-out. Baresi, who overcame several bouts of cramp to play the entire 120 minutes, didn’t hesitate to volunteer to take the first spot kick. In another cruel twist off fate he skied his effort over the bar. Falling to his knees and clutching his head in his hands, he cursed the gods. Surely it couldn’t happen again?

After a miss by Dainele Massaro Italy trailed 3-2. It was left to the imperious Baggio, Italy’s messiah, to level the scores. After a lengthy run-up the Juve man ballooned his effort high over the bar, breaking Italian hearts once again, and becoming the media’s scapegoat. Baresi, battered and bruised, had given everything for the cause – but it just wasn’t quite enough.

So ended another chapter in the Virgilian drama that is the life of Franco Baresi. Despite losing the final, his performance against Brazil – one of the greatest by a defender – remains a symbolic triumph of the human spirit.