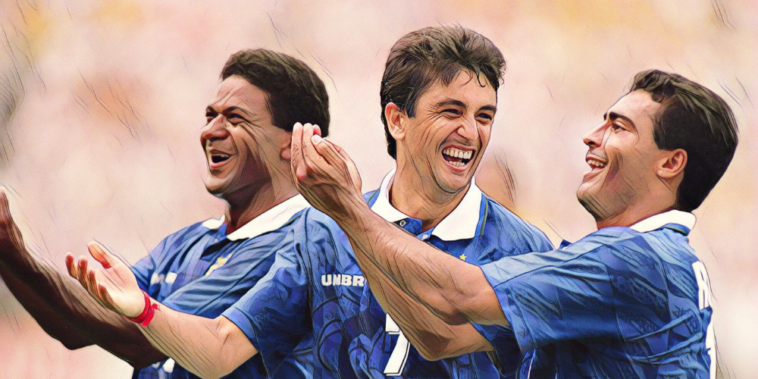 Romario and Bebeto’s sensational synchronisation during the 1994 World Cup ensured their place in the pantheon of Selecao superstars.

Brazil’s history with world football’s most prestigious tournament is both long, storied and successful, with few nations possessing such affinity with the sport’s biggest event.

That summer in the United States was the zenith of Romario and Bebeto as a potent pairing, working in tantalising tandem as Brazil conquered all before them to win the World Cup for a record fourth time.

The telepathy between the South American strikers was vivid, dovetailing in devastating fashion as Carlos Alberto Parreira’s side claimed the crown as the world’s finest international side.

Whilst their unique understanding came naturally within the confines of the pitch, the contrasting backgrounds and approaches to life of the duo made it a relationship that proved both strained and successful throughout the course of their careers.

Bebeto was the first to make his name, a footballer who came from a comparatively privileged background when juxtaposed alongside the rags-to-riches tales more often associated with Brazil’s best.

His clean-cut image and unwavering faith were a world away from the self-proclaimed ‘street cat’ who would later become his teammate, with Romario’s extravagant arrogance and penchant for partying the antithesis to Bebeto’s beliefs.

The latter overcame no shortage of obstacles and challenges to reach the summit of the sport, raised in one of Brazil’s most challenging economic climates with football providing Romario with escapism both in mind and matter.

Before their telepathy as teammates however, the duo were domestic rivals.

Bebeto’s goalscoring gifts first became apparent during a spell at Flamengo, his performances soon earning him selection for the national side in 1985, though he initially struggled to make an impression with Careca established as Brazil’s centre-forward.

Romario’s emergence came in the colours of Flamengo’s cross-city rivals, Vasco da Gama. Stout, stocky and often spectacular, the forward’s explosive low-centre of gravity enabled him to torment defences with his goal record quickly bordering on the absurd.

As the duo scored prolifically and contested for the state title across the following seasons, their flickering rivalry was stoked.

The 1988 Olympics proved the first time their paths would cross as teammates, with Bebeto’s form at club level having earned him a recall to the Selecao, where he joined Romario in Seoul.

The latter was a sensation, finishing as the tournament’s leading scorer as Brazil won silver, netting seven goals in just seven appearances to attract interest from across the Atlantic.

Bebeto’s contribution – two goals for the runners-up – was less notable, but it proved the start of the forward establishing himself into the international fold.

On separate continents the pair continued to flourish and demonstrate their predatory prowess, with Bebeto named as South American Footballer of the Year as Romario cemented his status as one of the world’s finest forwards in the Netherlands.

One year after their exploits together at the Olympics, the partnership was reunited as Brazil hosted the 1989 Copa America in search of a first major trophy since the 1970 World Cup and first South American Championship in four decades.

Brazil was expectant. But the nation’s dreams were realised as Bebeto and Romario dismantled defences in unstoppable unison.

The former finished as the tournament’s leading scorer with six goals, with Romario contributing a further three as the fluid forward pairing interchanged to illuminate the championships.

Their successes included a 2-0 win over world champions Argentina, each netting a goal as Brazil cantered towards a long-awaited Copa America triumph. The final winner fittingly saw the duo combine as Romario headed home to seal success against Uruguay.

The harmonisation that had delivered silverware for the Selecao would not last however, as the early nineties saw Bebeto and Romario return as rivals in domestic competition.

Bebeto’s move to Deportivo La Coruna and Europe saw him finish as Spain’s leading scorer during his first season since leaving Brazil, but the following campaign saw Romario arrive in La Liga as a direct competitor for team and individual honours.

Barcelona viewed Romario as the final piece of the puzzle for Johan Cruyff’s Dream Team, having watched the star plunder an extraordinary 128 goals in just 142 appearances across his five seasons with PSV.

The rivalry that had bubbled beneath the service in Brazil was about to explode.

Barcelona and Deportivo went head-to-head in the 1993/94 title race, with the animosity growing ever uglier between the international teammates.

Romario – never afraid to speak his mind or court controversy – made regular public jibes in the direction of Bebeto, including referencing the forward as ‘crybaby’ for his perceived complaints to referees.

Deportivo headed into the final day in the driving seat and in control of their own destiny, knowing victory would secure them the title ahead of their Catalan chasers.

Handed a lifeline with a stoppage-time penalty when drawing against Valencia, Bebeto – expected to step up with regular taker Donato substituted – buckled under the pressure and allowed Miroslav Djukic to take the kick.

The relationship between Bebeto and Romario reached its nadir as Brazil prepared for that summer’s World Cup in the US, the latter having publicly announced he would refuse to sit next to the former on the nation’s flight to the States.

This came despite Bebeto having reportedly championed Romario’s return to the national side, having been ostracised following a fall-out with head coach Parreira as Brazil stumbled through qualification.

If the pair’s relationship off the pitch was at an all-time low, the on-pitch telepathy displayed from the duo remained as harmonious as ever.

Differences discarded in pursuit of a common goal, Romario and Bebeto were Brazilian brilliance personified.

Russia were on the receiving end of the potent partnership in the World Cup’s opening fixture, Bebeto’s cross was turned home by Romario as Brazil began in winning fashion.

The goals and combinations continued to come as Parrerira’s pragmatic side progressed, their inspirational twin-threat seeing Brazil emerge as contenders for the crown.

The shared search for success saw the strikers’ frosty relationship become ever warmer, with Bebeto and Romario sharing an emotional embrace after combining to eliminate the host nation in the last 16.

Brazil faced the Netherlands next. In a fixture etched into World Cup folklore in Dallas, the deadly duo inspired the South Americas to a 3-2 win, with a Selecao celebration living long in the memory.

Bebeto doubled Brazil’s advantage after rounding Ed de Goey, before racing off rocking his arms in a cradle motion to commemorate the birth of his child.

🗣️ "I looked to one side, I looked to the other, and the two were doing the same thing!"

🔙 #OnThisDay in 1994 @bebeto7, @RomarioOnze & Mazinho teamed up to produce one of the most iconic celebrations in #WorldCup history 👶pic.twitter.com/y9kLtbitzj

Soon he was joined by teammates Romario and Mazinho, the former joining his one-time rival in a euphoric and touching moment of celebration.

Romario’s goal edged Brazil past Sweden in the semi-finals, before a meeting with Italy at the Rose Bowl in Pasadena proved a final fixture of huge magnitude but little entertainment.

Brazil’s formidable forward line was unable to find a way through the Azzurri resistance, with Roberto Baggio’s wayward penalty the defining image of the South American’s shoot-out success.

Bebeto and Romario had inspired Brazil to the ultimate success, their triumph on the world stage placing their prolific partnership amongst the everlasting annuals of football history.

Having failed to see eye-to-eye for much of their time in tandem, their ability to work in such majestic synchronisation was a testament to the talent of two wonderful footballers, with Brazil unbeaten across the 23 fixtures in which they shared the pitch.

Bebeto and Romario; the polar opposites who brought stunning synergy to the Selecao.