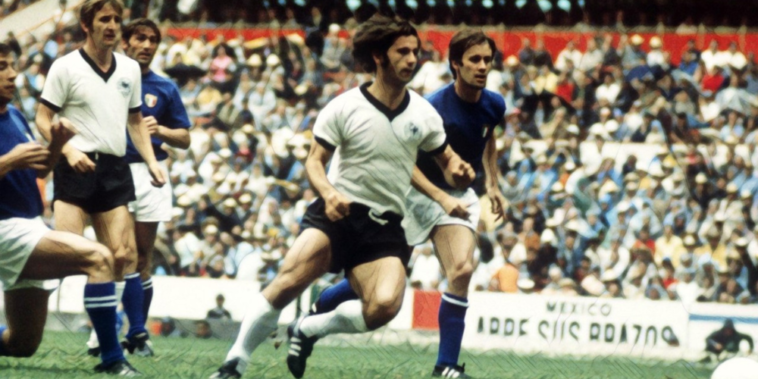 The dream of winning the FIFA World Cup is edging ever close for the final four teams in Qatar, each of who are now just two games from glory as we prepare for the semi-finals.

Ahead of the last-four ties, we’ve looked back at five of the most memorable semi-final games in World Cup history.

The fixture which truly announced the arrival of Pelé as a global superstar.

Brazil’s teenage sensation had had a slow start to the tournament after missing the opening games with a knee issue, before returning to score the winner as Wales were beaten in the quarter-finals.

The South Americans’ pursuit of a first world crown faced a formidable obstacle in the form of France in the last four, with Les Bleus boasting the brilliant Just Fontaine among their ranks. Fontaine had scored eight goals in four games before the clash and levelled Vava’s early opener for Brazil after nine minutes.

Pelé, at 17 years & 244 days old, became the youngest player ever to score a hat-trick at a World Cup finals as Brazil defeated France 5-2 in the semi-final at the Råsunda Stadium, Stockholm.

Unfortunately, there is no sound on this clip. pic.twitter.com/GKJML525Xg

Didi restored Brazil’s lead before half-time, before the second half belonged to Brazil’s breakout star. Pelé stunned the world with a brilliant hat-trick, capitalising on a fumble from the goalkeeper to net his first from close range. He added a second with a powerful prodded finish and completed his hat-trick with a wondrous third, controlling Didi’s pass on his thigh before lashing in the dropping ball from the edge of the area.

At 17 years and 244 days, he remains the World Cup’s youngest ever hat-trick goalscorer. Five days later, he scored twice – becoming the youngest ever final scorer – as Brazil thrashed host nation Sweden 5-2 to be crowned world champions for the first time. A legend had been born.

Arguably the greatest World Cup semi-final of all time and one of the most memorable matches in football history.

Italy and West Germany shared seven goals in a thrilling last-four tie, with five of the goals scored in extra time after a stoppage-time German equaliser had forced an additional period. Roberto Boninsegna’s early goal looked to have sent two-time winners Italy into the final, but Karl-Heinz Schnellinger proved an unlikely saviour for West Germany with a late leveller.

His injury-time equaliser against Italy in the 1970 World Cup semi-final was the only goal he scored for West Germany leading the German commentator to remark – “Ausgerechnet Schnellinger!" or “Of all players, it's Schnellinger!” pic.twitter.com/PaIJ2oG5Nn

What followed was an extraordinary period of extra time. Gerd Muller put Germany ahead after some disastrous Italian defending, before Tarcisio Burgnich rifled in to level the scores once again. Gigi Riva then swung the momentum back in favour of the Azzurri, as he sidestepped a challenge on the edge of the area before placing a low finish into the bottom corner.

The drama continued and Muller’s second brought Germany back on terms, but the scores were level for just seconds. A minute later, Gianni Rivera made himself the hero as he converted Boninsegna’s cross to put Italy in the final.

It was an astonishing period of extra time as the two teams went blow for blow, with the Azzurri ending triumphant in a fixture dubbed the ‘Game of the Century’.

Just over a decade later and West Germany found themselves involved in another thrilling semi-final, with the added period again providing the stage for stunning drama.

The teams were unable to be separated in normal time as Michel Platini’s penalty for France cancelled out Pierre Littbarski’s opener.

France took control of the added period as goals from Marius Tresor and Alain Giresse gave Les Bleus a two-goal cushion, but the Germans dug in to stage a fightback and take the contest to penalties.

Karl-Heinz Rummenigge – the reigning European Footballer of the Year who had began the game on the bench due to a hamstring problem – reduced the deficit, before Klaus Fischer scored an acrobatic overhead effort to level the scores and take the tie to a shootout.

It was the first time a World Cup fixture had been decided on penalties and West Germany emerged victorious, as Harald Schumacher saved from Didier Six and Maxime Bossis to send the Germans through.

The goalkeeper’s presence on the pitch was a source of controversy however, following his infamous challenge on Patrick Battiston that left the Frenchman unconscious, with missing teeth, and a damaged vertebrae. Incredibly, Dutch referee Charles Corver did not give a foul.

A tense semi-final had been goalless in normal time, with Fabio Cannavaro outstanding for Italy as he marshalled the Italian’s defensive line and frustrated the hosts. In extra time, the action exploded in Dortmund. The Azzurri twice hit the woodwork in extra time and penalties looked set to decide the outcome as the clocked ticked towards 120 minutes.

Then came a quick-fire double that sent Italy into the showpiece. Fabio Grosso was the unlikely hero, as he curled home a brilliant finish past Jens Lehmann with just a minute remaining.

On this day at the FIFA World Cup 📅: @delpieroale seals an extra-time victory for Italy 🇮🇹 as they knock-out hosts Germany 🇩🇪 in 2006.

See all the action from the 2018 @FIFAWorldCup on ITV pic.twitter.com/AOZONye7jB

Germany, with just seconds left to equalise, pushed forward in search of a leveller but were soon undone on the break.

Alberto Gilardino freed Alessandro del Piero and the forward made no mistake with a delicate lifted finish past Lehmann to secure semi-final success for the Italians.

Perhaps not a great game in terms of even entertainment, but Germany’s mauling of Brazil in Belo Horizonte remains one of the most stunning results in World Cup history.

This was supposed to be Brazil’s World Cup. The record five-time winners were hosting the finals for the first time since 1950 and were hoping to exorcise the demons of that tournament, when the South Americans lost the final in a huge upset to Uruguay.

Instead, created in 2014 was a new demon, one of gargantuan size. In the semi-final, Germany ran riot and in a stunning opening 29 minutes raced into a five-goal lead. There were just 179 seconds between Germany’s second and fourth goals in a ruthless and remarkable performance.

A nation shocked as Brazil 🇧🇷 crashed out of the 2014 @FIFAWorldCup after a thrashing by Germany 🇩🇪 pic.twitter.com/mb34DojLB3

The atmospheric Estadio Mineirao crowd was stunned, as Brazil’s heaviest ever defeat came in a World Cup semi-final on home soil. It was also a first competitive defeat at home for 39 years. Toni Kroos and Andre Schurrle each scored twice, while Miroslav Klose became the tournament’s all-time record goalscorer with his 16th World Cup goal.