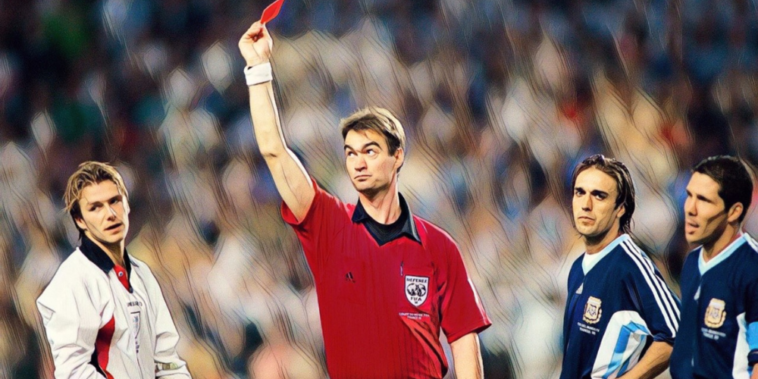 The relationship between the English media and its national football team has not often been a harmonious one.

The chance to represent England comes with both pride and pitfalls, the latter including a spotlight and scrutiny difficult to comprehend until the glare burns brightly.

A build them up to knock them down mantra from the media has had no shortage of sporting subjects, from the fragile genius of Paul Gascoigne, Rooney-mania and the more modern scapegoating of Harry Maguire.

None, however, have faced the intense wrath David Beckham did following a moment in Saint-Étienne that would forever change his life and begin the most remarkable redemption arc in English football memory.

As with most figures thrust into the spotlight there is an immediate sense of goodwill. Beckham burst onto the scene as arguably the most exciting of Fergie’s Fledglings at Manchester United, a collection of academy graduates who later formed the spine of English’s football’s dominant superpower.

Beckham was not the most talented of the crop, but a wondrous right foot and burning desire to improve saw him soon begin to make a name. His embarrassment of Wimbledon goalkeeper Neil Sullivan from inside his own half on the opening weekend of the 1996/97 campaign catapulted him into the consciousness of the more casual football fan.

In 1997 he began making headlines off the pitch and brand Beckham was soon born. With his boy-band good looks and floppy-blonde curtained hair, he found himself on the front and back of the nation’s newspapers. A romantic relationship with a Spice Girl – then the world’s biggest girl group – will do that to a man.

As the 1998 World Cup approached Beckham was a key part of England’s plans. Since missing out on a home tournament at Euro ’96, he had featured in all of the Three Lions’ World Cup qualifiers and ended the previous domestic campaign as the Premier League’s leading assist provider.

Glenn Hoddle, however, had reservations over Beckham’s concentration for the tournament and he was a shock omission from the starting side for England’s opening two fixtures. England opened with a 2-0 win over Tunisia, but a defeat to Romania in their second game left the Three Lions in need of a result against Colombia.

Beckham was recalled and responded in trademark fashion. Darren Anderton’s goal had given England the lead, before Beckham bent home a fantastic free-kick to score his first international goal.

Here's a flashback to THAT free-kick for @England against Colombia back in 1998 😍 pic.twitter.com/Uhe6nnQXDo

Beckham’s performance saw him retain his place as England faced old rivals Argentina in the last 16. The Falklands War the previous decade had left a sense of bad blood between the nations, increased from a sporting perspective by Diego Maradona’s ‘Hand of God’ antics in 1986.

It was a game that lived up to its billing.

Inside 16 minutes England had come from behind to lead at the Stade Geoffroy-Guichard. Gabriel Batistuta and Alan Shearer exchanged early penalties, before a teenage Michael Owen announced himself to the wider world with an iconic individual goal. Javier Zanetti’s strike, following a well-worked free-kick routine, brought the sides level again on the stroke of half-time.

Moments into the second half the narrative changed and Beckham was at the centre of the plot twist after being floored by a robust challenge from behind. Diego Simeone, the Argentine antagonist to our leading man, had little interest in the ball. Beckham’s retaliation – a petulant kick aimed at Simeone’s calf – was tame, but right under the referee’s watchful gaze.

Simeone’s theatrics only added to the drama and England were down to ten men. Red.

England’s disadvantaged team battled on and took the tie to penalties, but crashed out as misses from Paul Ince and David Batty condemned the Three Lions to an early exit.

In an instant Beckham had gone from media darling to public enemy number one, the knives of the tabloids sharper than ever. Death threats arrived in their dozens and the image of a Beckham effigy hanging outside a London pub became chillingly infamous. The Daily Mirror ran the headline ’10 Heroic Lions, One Stupid Boy’ and printed a dartboard adorned with Beckham’s face.

Even considering how the social media age has made public figures regular targets for taunts, the backlash Beckham faced was something not seen before or since. Bullets arrived enclosed in envelopes through his door.

“I remember how tough it was. It was a tough tournament to start off with, it got better then it got really bad,” Beckham recalled to former United and England team-mate Gary Neville on The Overlap YouTube channel

“That was a tough start [not getting picked for the first two games], what happened after that it was tough all round. I never felt I was frustrated playing in those games.

“I don’t remember going on that pitch wanting to prove a point because I had been left out of other games. It was just a moment that happened where I reacted – it was a moment of madness, really.

“When I look back on my career and talk about regrets, I wish that never happened. But on the flip side, if it didn’t happen, I might not have had the career that I had.

“It’s probably harsh to say I still feel let down [by team-mates] but I look back at that moment – we were young. I made a mistake but there’s certain people in football you expect to get behind you no matter what. We always had that at United, but I felt let down.

“I don’t think I’ve ever been as emotional as I was coming out of that ground and seeing my mum and dad. I was crying, uncontrollable sobbing, which is slightly embarrassing. At the time, the Argentina coach was going past and they were all banging [on the window].”

"If it wasn't for the #MUFC fans, it would have been very difficult for me to get over that moment." 🔴

Beckham’s moment of madness had let his team and nation down, with Owen – the teenage star whose reputation soared in the opposite direction following France ’98 – admitting his teammate’s actions still leave him with a feeling of ‘some resentment’.

“I feel that what David did probably wasn’t a red card offence in the first place,” Owen wrote in his 2019 autobiography.

“While it was clearly premeditated, it was immature and petulant more than it was violent. But for me, that almost makes it worse. I’d be lying if I didn’t say that what David did that day hadn’t let every single one of that England team down.

“Did he deserve the abuse he got afterwards? Certainly not. What human being needs to see his or her effigy being burned? But David let us down, and I still hold some resentment about it today.”

Fortunately for Beckham, in Sir Alex Ferguson and Manchester United he had an environment determined to protect him. In his sanctuary at Old Trafford, Beckham began to bounce back. Opposition grounds booed and jeered the midfielder, but performances soon began to banish the memories of Saint-Etienne.

He ended the 1998/99 campaign as treble winner, with his role in Manchester United’s historic feat seeing Beckham finish as runner-up for the Ballon d’Or.

Just 78 days on from his red card against Argentina, as effigies still burned in grounds around England. What a goal.pic.twitter.com/GvolBqAj5q

At the turn of the millennium, interim manager Peter Taylor made a decision that would change Beckham’s career. Alan Shearer’s retirement opened up a vacancy as captain and Beckham was awarded the armband, a role he would maintain during Sven Goran Eriksson’s England regime.

Eriksson had replaced Kevin Keegan as manager following the latter’s resignation, after England opened their qualification for the 2002 World Cup with a home defeat to Germany. Results improved, including a 5-1 thrashing of the Germans in Munich, but the Three Lions entered their final fixture in need of a result that matched their old rival’s to top the group.

Greece were the visitors to Old Trafford and had been poor travellers in the group, but soon showed appetite for an upset as Angelos Charisteas handed the visitors a shock lead.

That goal appeared to stoke a fire within Beckham, who charged around the pitch in perpetual motion. As others around him seemed frozen under pressure, Beckham was an example of endeavour and fight, willing his side forward with sheer effort.

Beckham’s brilliant cross was headed home by Teddy Sheringham to level the scores, but moments later Greece struck a second. What had been anticipated to be an occasion of celebration began to turn sour, as the clocked ticked rapidly towards full time with no passage past the Greek resistance.

One final chance arrived. As Beckham stood over a free-kick in second half stoppage time, Old Trafford – and a nation – held its collective breath. Beckham had failed with five previous set-piece attempts and knew this would be England’s final chance.

It could hardly have been more perfect.

Beckham bent the ball into the top corner with an unstoppable effort and the Theatre of Dreams erupted in unison. It was an astonishing climax to a nail-biting occasion, with a moment of magic from the England captain completing a remarkable redemption tale.

“That was the moment that England supporters forgave me for what had happened a few years before,” Beckham said, as per the BBC.

“For me personally, that was redemption for what had happened, because up until then, there was always that cloud around the sending-off.”

“It’s probably the clearest moment that I have in my memory of my football career and it was probably one of the most special moments,” Beckham later told The Sun.

“To represent my country, to captain my country, to score a goal that meant so much to our country and the fans… and to do it all at Old Trafford. For me, it couldn’t have been any more perfect.”