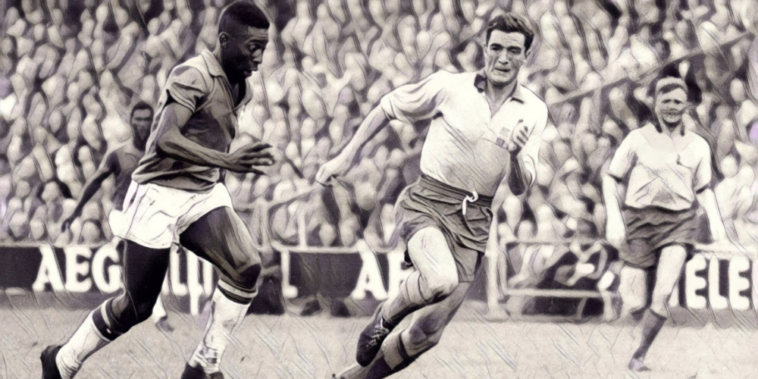 Brazil and the World Cup is a love affair that has lasted decades. No nation has ever been crowned world champions on more occasions than Brazil, whose iconic yellow shirts and fun-loving brand of football is etched into the memory banks of fans across different generations.

It is a tale that truly began in 1958, as a new, multi-racial Brazilian side travelled to Sweden. Memories of the Maracanaço, in which Brazil – then deemed heavy favourites – squandered a lead to lose the 1950 final to Uruguay on home soil, were still fresh in the memory as the Selecao arrived in Scandinavia.

Vicente Feola’s side began the tournament by beating Austria in comfortable fashion, before a goalless draw with England left Brazil in pole position to reach the knockout rounds. Their opening two fixtures had come without Pelé in the side, the teenage sensation about to turn rapidly from Brazil’s best-kept secret to a global superstar.

Pelé had arrived in Sweden still suffering from the effects of a knee issue and despite rejoining training was deemed unable to feature in the opening two fixtures. Ahead of the tournament, Brazil had sought the advice of a psychologist who was tasked with assessing the mental strength of the squad. Pelé, then just 17, did poorly on examination and was described as “obviously infantile”.

The forward had made his debut for the national side a year earlier, scoring in a 2-1 defeat to Argentina to become Brazil’s youngest ever goalscorer. From his initial emergence at Santos, he had been backed to become the world’s greatest player. The 1958 campaign – just his second in the senior side – saw Pelé score 58 goals in the Campeonato Paulista, a record that still stands.

In Sweden, the world would discover what Brazil already knew.

Pelé made his first appearance of the competition against the USSR in Brazil’s final group game, before scoring the decisive goal as Wales were beaten 1-0 in the quarter-final. In the process, he became the youngest goalscorer at a FIFA World Cup, a record that remains more than six decades later.

In the semi-final, Brazil faced France. In Les Bleus’ ranks was Just Fontaine, a footballer who had illuminated the finals to date. Fontaine had scored eight goals in just four games, but was forced into the shadows during the semi-final as the impossible precocity of Pelé shone in the last four.

A stunning hat-trick catapulted the tantalising teenage talent into the consciousness of the common fan, as Brazil marched into the final with a 5-2 thrashing of the French. Pelé was now the star attraction, with the build-up to the decider against host nation Sweden dominated by a media frenzy, each attempting to get their piece of this implausible talent.

What developed into a perfect game did not begin in such fashion. Sweden won the toss and as a result the right to adorn their traditional yellow shirts, before taking an early lead in the final as Nils Liedholm showed clever feet on the edge of the area and drove in a low finish.

Unflustered however, Brazil regrouped and responded. Vavá turned home an equaliser from close range moments later, before scoring a second in similar fashion to hand Brazil the lead at the break.

After the break, it became the Pelé show.

Undaunted at the prospect of playing in football’s biggest fixture, the teenager took centre stage to begin his World Cup legend. His first goal was a moment of genius, a stunning sequence of confidence not seen before or since from a footballer of his age on the grandest of stages.

Nilton Santos’ ball into the box seemingly carried little threat as it arrived chest height at Pelé, but an excellent cushioned touch took forward away from the close attentions of his Swedish marker, Sigge Parling. His second touch was extraordinary, lifting the ball over the head of Bengt Gustavsson before firing home on the volley as it dropped invitingly on the other side.

It remains arguably the greatest individual goal scored in a World Cup final.

Brazil beat Sweden 5-2 in the World Cup final in Stockholm.

The pick of the goals came in the 55th minute from some 17-year-old kid named Pelé… I wonder whatever became of him? pic.twitter.com/OfEYJrusKH

“If I said I thought about it, I’d be lying,” Pelé later reflected to FIFA.

“It was a spur of the moment reaction, quick thinking. When I controlled it, I was going to hit it first time, but then I managed to think quickly and change. Thankfully, one of the strengths in my life and in my football was improvisation.”

Goals from Mário Zagallo and Agne Simonsson left the final at 4-2 heading into the final minute, when Pelé headed home his second to consolidate the 1958 final as his final. An impudent back-heeled flick released Zagallo, whose cross found the onrushing teenager to guide the ball over the goalkeeper for Brazil’s fifth.

As the full-time whistle blew Brazil basked in the celebrations. The demons of their final defeat eight years earlier were exorcised. Even in defeat, the home crowd applauded the South American champions, who respectfully embarked on a lap of honour holding aloft a Swedish flag.

The boys from Brazil were world champions, a feat achieved in spellbinding Samba style. No player epitomised their success more than Pelé, a footballer who brought fantasy to the World Cup and combined flair-filled imagination with a ruthless touch around goal.

The world champions had waltzed to a maiden triumph, scoring 11 goals in just three knockout round games. Six of those had come from Pelé, an astonishing achievement for one so young.

Pelé, in truth, was just a kid. But one who had risen from an impoverished environment to a place on top of the footballing world.

It was the birth of Joga Bonito and Brazil as a superpower. The first, and perhaps the defining, chapter in the tale of the nation’s favourite son.