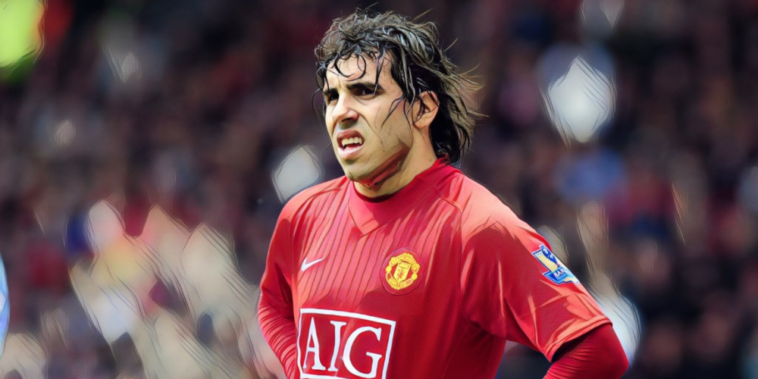 Manchester United host West Ham in the Premier League this weekend, with both teams harbouring ambitions of ending the campaign in the European places.

Erik ten Hag’s rebuild has shown some encouraging signs this season, while David Moyes’ task will be to ensure West Ham can compete with the Premier League’s top teams.

Teddy Sheringham was one of the Premier League’s leading forwards throughout the first decade of the rebranded division, winning the league’s inaugural Golden Boot during a prolific five-year spell with Tottenham.

Sheringham was an intelligent footballer who was as equally adept at creating goals as he was scoring them, with Sir Alex Ferguson making his move to sign the 31-year-old from Spurs as a replacement for the outgoing Eric Cantona at Manchester United.

Not everyone was convinced at the signing of a player perceived to be past his peak and who had scored just seven league goals the previous season, but Sheringham won over the Red Devils faithful during a hugely successful period across the turn of the millennium.

He won three league titles and played a crucial part in the club’s historic treble-winning season in 1998/99, scoring in the finals of both the FA Cup and Champions League.

Sheringham’s finest individual season came in 2000/01, as the evergreen star scored 21 goals in all competitions to be named as the PFA Player of the Year and FWA Footballer of the Year.

He returned to Spurs for a two season spell before a short stint at Portsmouth. He later signed for a West Ham side who had dropped out of the Premier League ahead of the 2004/05 season.

The 38-year-old continued to defy father time as a 20-goal haul fired the Hammers to promotion, a campaign which saw Sheringham win the club’s Player of the Year accolade. He later helped the Hammers reach the FA Cup final  in 2006.

Sheringham scored 30 goals in 87 appearances for West Ham, leaving the club as the oldest outfield player in Premier League history and as the division’s oldest ever goalscorer, netting his final goal against former club Portsmouth aged 40 years and 266 days.

Part of a talented group of academy graduates who came through West Ham’s hallowed youth system before winning international honours, Rio Ferdinand broke into the Hammers side as a teenager and was quickly tipped to reach the top.

Ferdinand was an athletic defender with a classy composure in possession and his performances quickly attracting attention, as he became the youngest defender to represent England after making his senior debut aged just 19.

The centre-back made 159 appearances across four seasons and won the club’s ‘Hammer of the Year’ accolade in 1997/98, before helping West Ham to their highest-ever Premier League finish of fifth the following season.

Leeds came calling and signed the defender in an £18m British transfer record deal. Ferdinand spent two seasons at Elland Road before becoming Britain’s most expensive footballer – and the world’s most expensive defender – for a second time when joining Manchester United in 2002.

It was with the Red Devils where he cemented his status as one of the Premier League’s greatest ever defenders, winning six league titles and the Champions League amongst a wealth of major honours at Old Trafford.

Ferdinand was named in the PFA Team of the Year on six occasions and captained England at international level. He was a player often described as a ‘Rolls Royce’ of a defender for his ability to effortlessly frustrate even the Premier League’s finest forwards.

Another of the famed group to come through West Ham’s ‘Academy of Football’, Michael Carrick was an unusual graduate given the midfielder was brought to the capital from his native North East.

Carrick had been spotted playing for the renown Wallsend Boys Club that has produced players such as Peter Beardsley, Alan Shearer and Steve Bruce and joined a thriving academy at West Ham where he formed part of the side that won the FA Youth Cup in 1999.

He broke into the senior side soon after and was a regular following the turn of the millennium, a midfielder comfortable in possession and able to dictate the pace of the play.

Carrick remained with the Hammers despite their relegation in 2003, but after the club failed to return instantly to the Premier League he moved to Tottenham and became a key figure in the Spurs engine room.

His performances were enough to convince Sir Alex Ferguson that he was the long-term successor to Roy Keane at Manchester United and an £18m deal was struck for the midfielder. It became one of the club’s shrewdest investments of the modern era.

Carrick overcame a difficult start to cement himself as one of the Premier League’s best midfielders, forming part of five title-winning sides with the Red Devils and becoming one of just two English players – alongside Wayne Rooney – to win every major club honour available during a glittering career.

Criminally underused at international level, Carrick provided the calming influence on the United midfield for more than a decade, making 464 appearances across all competitions and scoring 24 goals.

Carlos Tevez’s arrival at West Ham remains one of the strangest and most shocking transfers of the Premier League era, the image of the Argentine – and compatriot Javier Mascherano – alongside Alan Pardew in claret and blue still appearing odd.

The two players had been chased by Europe’s giants before heading to the east London outfit, a double transfer shrouded in controversy over third-party ownership and resulting in once of the most fascinating relegation battles of all time.

Whilst Mascherano struggled and failed to make any impact before departing for Liverpool, Tevez overcame his own slow start to become a Hammers hero with the forward the inspiration behind West Ham’s incredible survival story.

Tevez’s tigerish aggression and goalscoring ability saw him adored on the terraces and he led the club’s fight against relegation in style, scoring seven times over the final 10 games of the season as West Ham stayed up after appearing dead and buried.

Sit back, relax and take three minutes out of your day to watch every Carlos Tevez goal in a West Ham United shirt 🍿 pic.twitter.com/LLSmQTfrwS

That haul included a final day winner against champions Manchester United at Old Trafford, the side who would secure his services that very same summer.

The move provided the Argentina international with a platform to showcase his talents at the highest level and he formed part of an iconic front three alongside Wayne Rooney and Cristiano Ronaldo, winning a Premier League and Champions League double in his debut season with the Red Devils.

Tevez scored 34 goals in 99 appearances for United before making another controversial move. He signed for billionaire-backed rivals Manchester City and forever souring his relationship with the red half of the city, after helping the ‘noisy neighbours’ to FA Cup and Premier League triumphs.

Among the most popular figures in Manchester United’s modern history, Patrice Evra’s mix of talent and extroverted passion for the side made him a huge fans’ favourite during a successful spell at Old Trafford.

Evra signed from Monaco in a £5.5m deal during the 2006 January transfer window and bounced back from a disastrous Manchester Derby debut in style, holding down the club’s left-back position for more than eight years and winning an abundance of silverware.

The France international formed part of the side that won three consecutive league titles between 2007 and 2009, the second of which came alongside Champions League success after beating Chelsea in the first-ever all-English final in Moscow.

Evra brought energy and tenacity to the left-hand side in addition to vision and technique in possession, marauding forward from his defensive role and forging a reputation as one of the world’s best at the peak of his powers.

He won 10 major honours with United, including five Premier League winners’ medals, and made 379 appearances in all competitions before spells with both Juventus and Marseille.

Evra returned to the Premier League with West Ham in 2017 but was far from the buccaneering force of old. He made just five league appearances for the Hammers before retiring from the game.